Times played: 3, with a copy I purchased

I’m a sucker for dice, and I am not quite sure why. My favorite games are generally more strategic and have a limited luck factor, but give me a quick, light game where I can roll a fistful of dice and I am in.  I haven’t always been a fan of dice versions of already-existing board games, though; they sometimes feel contrived and as if they are just an attempt to profit off an already successful game. However, Istanbul the Dice Game is, in my opinion, an improvement over the original game. (Or, as we’ve been calling it in my house, “Istanbul-not Constantinople-the Dice Game).

The goal of Istanbul the Dice Game is the same as that of Istanbul the Board Game – collect the most rubies. There is a small board that is placed in the center of the table, with different areas where rubies can be collected. Six mosque tiles are placed face-up and a deck of bazaar cards are placed face-down in draw stack near the board. In addition there are goods markers, crystals and six dice that act as your assistants, helping you make trades that will assist you in obtaining rubies.

On your turn you roll five of the six dice. The icons on the dice indicate the items your assistants can get for you – cards, money, or goods (cloth, fruit, spices or jewelry).  You then get to carry out two actions, using the results of the dice and any previously-acquired goods markers you already have.

Each player has a handy player aid that indicates the dice/goods needed to obtain a particular good, card or tile.  In order to take a particular action you use a combination of dice you rolled and any previously-acquired goods that you already have – these are spent just like they are a face of a die. You also can obtain brown goods markers that are wild and can serve as any color. 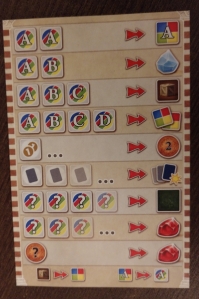 Goods markers can also be used to obtain mosque tiles, which give you extra income at the start of your turn or give you a special ability that can be used on your turn.

Some dice have a card symbol on them; if you choose this action you draw as many bazaar cards as you there are die faces with cards on them. You then choose one card to keep and discard the others.  Each card has an area at the top that applies to the active player and an area at the bottom that may apply to some or all of the other players. For example, a card may allow the active player to take the resource shown and three dollars and then allow all other players to take the resource shown OR three dollars. 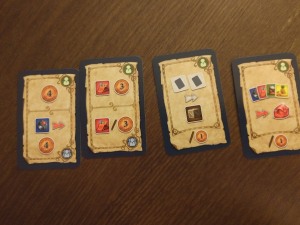 Play continues until one player has at least six rubies (or five in a four-player game). The round continues until all payers have had an equal number of turns and the player with the most rubies wins, If there is a tie, the tied players sell their Goods Markers for 3 dollars each and their Crystals for 2 dollars each and add them to any saved money. The tied player with the most money wins. If there is still a tie, the tied players rejoice in their shared victory.

Thoughts On The Game

I love this game. It takes all the things I liked about Istanbul the Board Game and streamlined the things that I thought were cumbersome or unnecessary. The movement, the abilities of the markets and the interactions with other pieces are removed, leaving you with a quick-to-play game that still involves the key strategic elements of the original game. The dice and your actions and abilities can be manipulated with collection of mosque tiles and the cards, so luck is never an overwhelming factor.

It works well with both two and three players (I have yet to try it with four). This is the perfect game when you need something that is fifteen – twenty minutes in length; it’s light but not devoid of strategy, and I am more than happy to play it in between more meaty games

Jonathan F.: I really enjoyed my one play.  I would say I almost love it, but I so like the mechanism of the stack of family members that was also seen in Goa, that I cannot Love I:tDG.

Craig M.:  Very enjoyable first and only play which is not what I would say about the original Istanbul. Not sure it differentiates itself from other dice games of similar weight, but it certainly could.

Joe Huber (3 plays): I was reasonably positively impressed by my first play of Istanbul: the Dice Game, to the extent that I sought out an additional play, and then a third to see if I wanted to add it to my collection.  I particularly enjoyed the tradeoffs of what to do with the dice – I think they are more interesting than in most similar games, and the ability to collect additional powers just add more potential to this aspect of the game.  While I ended up not purchasing a copy – it was a near thing. I wouldn’t be unhappy to have a copy in my collection, but it would always be near my cut line. So instead I’ll settle for playing it occasionally with those who love the game – always the best environment for playing a game.

I love it: Tery N

3 Responses to ISTANBUL – THE DICE GAME