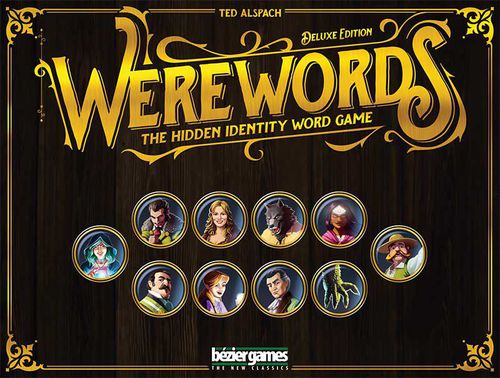 Werewords is in my top 20 games of all time, so I was thrilled when Ted Alspach and Bezier Games recently asked me to a preview of the Werewords Deluxe Edition.  The Kickstarter campaign went live today, and the game will be released later this year.

I was given a handmade prototype to play with, and I love this expanded version of Werewords, which includes new roles, new artwork, and new ways to play.  If you’re a fan of the game, I enthusiastically recommend this.  If you’re new to Werewords, it is certainly worth checking out.    My group and I have played more than two dozen times in the past few weeks.

This review walks through the gameplay assuming you’ve never played Werewords, but I also highlight the new features.

The Mayor of the village has found a magic word, and if everybody says it together, the Werewolves will be banished from the village.  Unfortunately, knowing this magic word has rendered the Mayor speechless, so that he may only answer yes/no questions with the use of tokens.  The Seer knows the word, but she must hide from the Werewolves, and the Werewolves know the word but are trying to lead the Village astray.  And now, in the Deluxe Edition, there are even more roles and ways to play.

Werewords uses a free app — available on both iOS and Android — to facilitate gameplay.  The app has been updated for the Deluxe Edition.

To set up for groups of four or more, take the Mayor card, the Seer card, one or more Werewolf cards, one or more Villager cards, and any other roles (discussed below) so that the total number of cards is one more than the number of players.  Each player takes a card, looking at it.  Then the Mayor flips up his or her card and takes the remaining face-down card.

Then, in the app, you select which goals are in the game, and it automatically calculates the number of players. 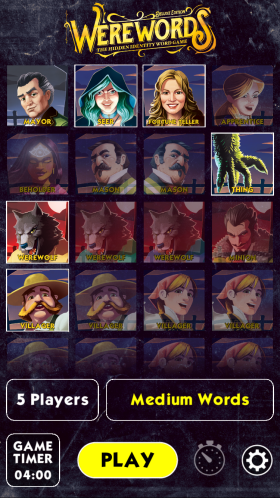 You tap the roles in the game, and the app automatically adjusts the number of players.  You can also customize word difficulty.

At this point, players will begin relying on the app, and the night phase begins.  Each player shuts their eyes, and the Mayor wakes up and selects his role on the screen.  Yes, the Mayor may also be the Seer or Werewolf!  And the Mayor doesn’t necessarily have to tell the truth.

The Mayor then chooses his word from a list, with players being able to customize the difficulty of the words available.  There are four levels of word difficulty: Easy, Medium (the default), Hard, and Ridiculous.  There are lists of words — for example, music-related words or food-related words — and there are over 10,000 words in the app.  Users can also type in custom words. 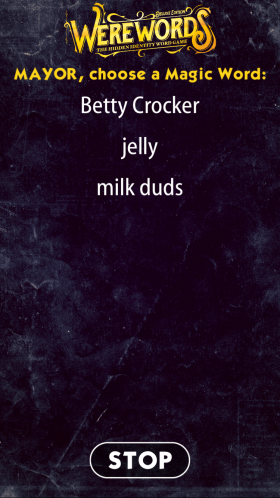 The mayor chooses from a list of magic words.

During the day phase, the app runs a timer, which can be adjusted to control the length of the game.  Players ask the mayor simple “yes” or “no” questions to try to identify the word, such as, “Is it an item?” or “Is it bigger than a breadbox?”

The mayor hands a player a token to answer each question.  The tokens are “yes,” “no,” and “maybe.”  The token art has been redone for the new version.  As stretch goals in the Deluxe Edition campaign, there are oversized tokens for “Correct,” “So Close,” and “Way Off.”  Players should only ask one question at a time, and the Mayor may only communicate by passing tokens. 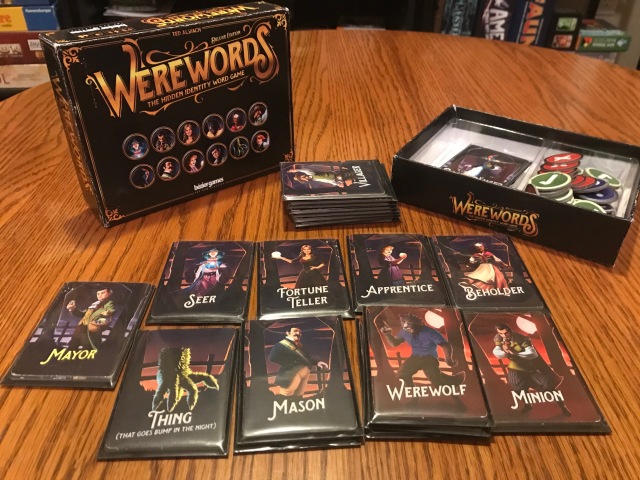 The components of the Deluxe Edition.  Note that this is a rough handmade prototype (which is why the cards are sleeved), and some of the components shown are Kickstarter stretch goals.

If the villagers guess the word, the Mayor presses the “Correct” button on the app.  The Werewolf shows his card.  The Werewolf still has the chance to win if he can guess the Seer, but if not, the Village team wins.

If time runs out, or if the Mayor has to press the “No More Tokens” button, the Village can still win if they guess the Werewolf in a vote after after discussion.

At higher player counts, or for more variety, you can work in additional roles.  This is where the Deluxe Edition shines, as it includes several new roles. 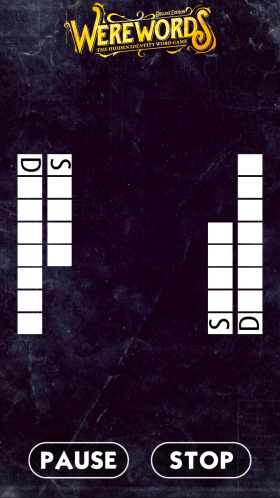 The word is “Salad Dressing,” in case you’re curious.

The Masons wake up at night and see the identity of the other Masons.  This helps the village team, since those players can vouch for each other, and is recommended for higher player counts.

The Thing (That Goes Bump in the Night) is another cool role that might be familiar to fans of One Night Ultimate Werewolf.  At night, when instructed by the app, the Thing wakes up and taps a neighbor on the shoulder.  This helps the village in that the tapped player can vouch that the Thing isn’t a werewolf.  Unfortunately, if the Thing taps a Werewolf, he just made finding the Seer a bit easier.

As a stretch goal, the Deluxe Edition includes a Doppelganger, in which that player looks at another player’s card in the night and assumes their role.

You can add additional Werewolves, in which case the Werewolves know who each other are, and they both get the chance to guess the Seer for the Werewolf team to win.  Conversely, if the Villagers vote for either Werewolf, then the Village team wins.

The Deluxe Edition also includes new ways to play.  The most notable way is the addition of Speedwords, in which players only get two minutes to find the word, but they also get a Wheel-of-Fortune-style display on the screen showing the size of the word and a couple of the letters.  This is my favorite way to play, and it makes an already fast-paced game go lightening fast.

The Deluxe Edition also includes rules for 2- and 3-player games, and the game now has cards and supplies that support up to 20 players.

Plus, there are countless additional features that have been worked into the new-and-improved app.

I’m a big fan of Werewords, so I was always going to love the Deluxe Edition, but it has far exceeded my expectations.  I’ve played this more than twenty times in the past few weeks, and it has rekindled by love of Werewords.

My favorite new feature is Speedwords.  It is a tense and clever way to play the game, since you’ve basically got two minutes to play a combination of 20 Questions, Wheel of Fortune, and Werewolf.

The other new feature I love are the new roles.  The Fortune Teller is my favorite, but really all of the roles are great.  It feels like the designer has brought into Werewords some of the cooler roles from One Night Ultimate Werewolf.

Werewords is such a joy because it is enjoyed by such a broad audience.  I’ve played this with everybody from my parents to my game group, and I’ve seen it enjoyed by both party gamers and strategy gamers.  And not only can anybody play it, but no matter what your role — from plain villager to werewolf to seer — you’re going to be involved in the game, having laugh-out-loud fun.

In short, everything about this new version is fantastic: the new art, the new roles, and the new ways to play.  Bezier has outdone themselves, and I look forward to backing this on Kickstarter.  If you like Werewords, you’re going to love the Deluxe Edition.  And if you’re new to the game, this is the definitive edition of one of the best social deduction games I’ve ever played.

Link to the Kickstarter Campaign

Shameless Plug: I did my first video review.  https://www.youtube.com/watch?v=38BpEXRErEs