Time Arena was one of the games that really caught my eye at the Press Show at Essen SPIEL 2017. Though I normally don’t look for 2-player only games, the brightly colored hourglasses and the visual similarities to Clash Royale (a game my boys play constantly on their phones) drew me in. In this game, two Lords of Time (who do NOT come from Gallifrey) battle in the Time Arena, which is a 8×10 board. 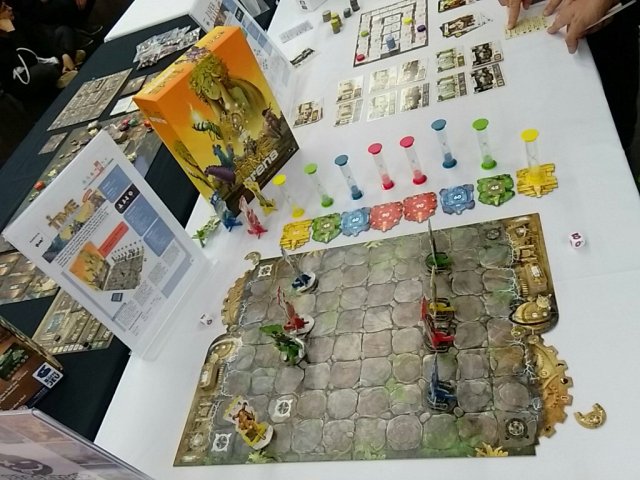 Each player controls a side of the board, and the goal is to try to destroy the other player’s Totem – that is his side of the board. Each totem starts with 6 Energy tokens on it. The catch is that each player only has a total of 5 minutes to achieve the win. If you run out of time on your turn, you automatically lose! You will need to have a smartphone available while you play the game, and you keep track of the time available for each player via a free app which can be downloaded for Android, iOS and Windows mobile. The app essentially works like a chess clock – when your turn is over, you simply hit the phone screen, and the clock starts for the other player.

Each player has a team of fighters, and they are marked with cardboard rings to denote which team they are on. Each fighter has a corresponding hourglass of the same color: yellow = 30 secs, green = 45 sec, blue = 60 sec, red = 90 sec. My set does have a mild bit of variability between the colors, and if this sort of thing really bothers you, you can use the phone app to more accurately measure the times. There are 12 different fighters in the game (3 of each color), and each has a unique set of characteristics – movement, attack and defend. Additionally, some of the fighters have a special ability as well. The fighters are drafted at the start of the game.

On a turn (the active player is ALWAYS the player whose 5 minute clock is ticking down at the moment) – a player must activate one or more of his fighters. Each fighter can only be activated once per turn, and the player can activate them in any order that he wishes. However, one Fighter’s turn must be fully completed before another fighter can be activated. When a fighter is activated, it can be summoned – if not already on the board – AND/OR moved AND/OR fight.

All fighters start off the board on their “gate” – which is a square tile matching the color of the fighter/hourglass. All hourglasses are in their empty state, that is, with all the sand in the lower portion of the hourglass. A fighter can be summoned IF it is on its gate AND its hourglass is empty. Thus, at the start of the game, all of your fighters are eligible to be summoned. A summoned fighter is placed in the Arena on any of the free summoning squares.

The Movement allowance are seen on the top of the fighter’s tile. The number of bumps on the top surface tells you the maximum movement per turn. You can move orthogonally or diagonally. You may not move through other fighters.

If a Fighter is adjacent (orthogonally or diagonally) to an opponent’s Fighter, it can initiate an attack. Almost every attack is essentially a sneak attack as there is no retaliation – unless the defending fighter has the special retaliation action. The attacking fighter rolls his die and resolves the fight. The possible die rolls:

X: A critical fail. Nothing happens

+0, +1, or +2: add the +number to your character’s attack value. Compare this sum to the defender’s defense number. If the summed attack is greater than the defense, the defender is knocked out. Otherwise, nothing happens
If a defender is knocked out, that piece is placed back on its gate, and its hourglass is flipped over. That particular character cannot be summoned again until its hourglass is once again empty.
If the fighter is adjacent to the opponent’s Totem, he can attack the Totem. Again, the die is rolled. If a +number comes up, the total attack is summed up as above. IF the attack succeds, you then remove Energy tokens equal to the difference between the Attack and the totem’s defense. If you roll a “KO”, the KO always takes away a single energy marker from the Totem, and then you still take away the difference between your Attack and the Totem’s defense.
As you are playing, each time that you roll a Critical Failure, you do get a consolation prize. Each totem has a Charge wheel on the left side. For each “X” rolled, you can move the marker one space to the right. At any point in your turn, you can use your charge wheel at the current icon (or any previously passed icon) and take a special action. When you do so, you return the charge wheel marker to the starting position. The possible actions are (from easiest to obtain to hardest):

At any point after manipulating at least one of your fighters, you can end your turn by touching the timer on the phone. Now, it’s your opponent’s turn to go through the same options. The game continues until one of the two end game scenarios is met; either one Totem is out of Energy tokens (and that player loses) or the timer runs out for one player (and that player loses).

When you are comfortable with the regular rules, there are two advanced rules which can be added in. First, on the expert side of the board, you can use the transporter squares – there are four pairs of transporter squares on the board, one for each color. Fighters can use one point of movement to move from one transporter to the other of the same color. The other expert rule is a new end game criterion – you can end the game if you are able to occupy all of the opponent’s summoning squares when all of his characters are off the board. You will automatically win as your opponent cannot bring any characters onto the board.

There is also a team version of the rules where players split up into two teams, and then within each team, each player is responsible for only the two fighters that they control. We have not tried this version yet, so I cannot comment more on this.

My thoughts on the game
I was initially drawn to the game based on my initial introduction to it. The familiarity of the arena duel with the added time pressure of the chess clock seemed to be a great combination. Though it took me awhile to get the game to the table enough to write a review (mostly because I really don’t play many 2P only games), I’ve had fun learning the overall strategies of the game as well as the more subtle differences between the twelve different characters.

There is definitely a big element of time pressure. When you’re on the clock – just as in Chess and Scrabble – you’d like to take enough time to look at all your options to choose the best play; but you can’t dally too long because you only have 5 minutes total to get everything done! You have to be very quick on your feet, and you must constantly be surveying the board to see what the best option(s) are for you.

Some turns can be quick, where you activate a single character and then make a pre-planned move. Turns like this might only take 5 or 10 seconds. However, when you have more characters on the board, sometimes you have to decide how many (and which) characters to activate. It takes more time to do this extra bit of planning, but you can make some powerful moves. But again, don’t take too long to ponder your options, because the five minute time limit can slip away quickly. Decision making definitely gets quicker and easier with experience as your brain won’t have to think about the rules and mechanisms, and you might even be more acquainted with the special actions of the characters.

Keep an eye on the clock. If you’re ahead on time, you might try to string the game along to win on the time limit. If you’re behind, you might have to gamble on attacks against other characters or the totem to try to get the upper hand in the fight.

The app here works well, and unlike most other games that I’ve played this year with a phone app, there were no glitches at all. So, hooray for that. The timer is easy to read. My set of hourglasses is close to having the same time for each color, and we’re not bothered by the mild variation. But, we did play with the timers on the app once, and that worked ok as well; though I must say, I prefer to be able to watch the sand trickle down the row of timers next to the board!

The rules are quite simple, and IMHO, they have to be simple given the short length of the game and the real-time nature which really prohibits you from taking time to look stuff up in the midst of the game. As a result, the game is quick to teach/learn, and the ten minute games usually leave you wanting to play another one right after the first.

A 2p only game will never likely be amongst my all-time favorites, but this is turning out to be a great filler and something I’m glad to pull off the shelf when there are only two gamers around – as infrequent as that might be around here.