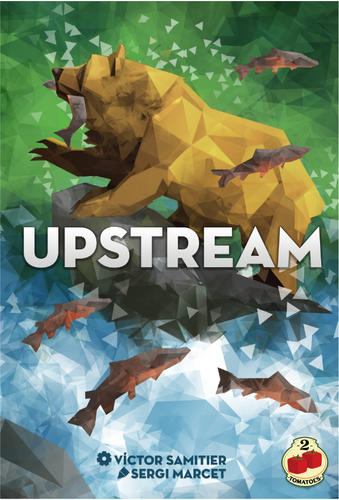 Upstream was high on my list of games to look at while in Essen 2017. However, the game never made it to the show, and I went home without a copy… Like many other titles, Upstream got caught up in the great ’17 German Customs debacle, and plenty of people went home without the games they were looking for…. So, I was thrilled to see the box arrive with the 2 Tomatoes games in them.

In Upstream, players control a set of salmon – initially having 8 fish (1 pair on each of 4 markers). The back side of the markers has a single fish on them – in case something horrible befalls your fish. There are four blank start tiles (with calm water), and they are set up in a diamond to start the river. Each player places one of their salmon pair tokens on each start space. There are four spawning tiles which mark the end of the salmon run – these are set aside for now, and will be used near the end of the game. The rest of the 35 river tiles are mixed up facedown and placed in a stack.

The initial board is set up with each player drawing a single tile from the stack and then placing it on one of the three spaces forming the mouth of the river. Some of these tiles will just have plain water on them, other might have predators (eagles, bears or herons), and others might have obstacles (waterfalls, rocks or rapids). When the first row of three tiles is finished, the next player then starts the next row, choosing any of the three available positions. If it matters, the player placing the tile can choose the rotational orientation of the tile. This process continues on until there are four full rows of three tiles emanating from the start tiles.

At this point, the game begins. The start player for the round (i.e. the player with the start token) goes first, and that player has 5 movement points to use on his turn. You can use a point to swim a token to an adjacent space (doesn’t matter if that token has 2 fish or 1 fish showing). There is a limit on any tile equal to the number of tokens equal to the number of players in the game – though a player could have multiple tokens on a single tile. If a tile is full, a salmon cannot even swim through the tile.

However, salmon can also jump. For a cost of one point to start the jump and then one point per tile covered in the jump, a salmon can move over a filled tile or over the waterfall obstacle which cannot ever be swum over.

Life is hard for poor salmon trying to get upstream to get their spawn on, and plenty of the tiles have predators who are looking for an easy meal.

Eagles will remove a salmon from a token if a token swims through or ends its jump on an Eagle tile. They don’t have a large appetite though, and once an Eagle has eaten a fish, the tile is flipped over to become a plain water tile.

Bears catch salmon that jump to or from the tile that they are on. They only want the airborne fish, and they leave swimming salmon alone. However, they are really hungry, and they are never flipped over, regardless of how many salmon they catch and eat.

The Blue heron is a picky bird, and he only eats at the end of a player’s turn. For each Blue Heron tile that you have fish on, this bird will eat a single fish regardless of how many you have on that space. The Heron only eats fish from the active player. Note that each Heron tile will consume one fish of the active player’s color each turn.

When all players have had a chance to take a turn (and use their five action points), the current round ends. The starting player gives the start player token to the next player to the left. Also, he removes the bottom-most three tiles from the river (if any salmon tokens are on these removed tiles, those tokens are also removed from the game) and then draws and places three new tiles on the top of the river. He can choose the orientation of the tile if it matters. If there are still many tiles left to be placed, a new round is started with the new starting player.

If there are only 2 tiles left, these tiles must be placed in the outer two spaces, and the four spawning tiles are placed in a diamond at the top, and the game moves into the last phase. In this last phase, salmon tokens that reach the first spawn space automatically stop. At the end of each round, all salmon tokens which are on Spawn spaces are simply moved to the next higher spawning space. The game continues until all salmon are either removed from the game by predators or are on spawning spaces.

Now it’s time to score – you score one point per fish remaining alive at the end of the game. You also score a number of bonus points per token equal to the spawning space on which it ended the game on. IF there is a tie, it is broken by the player with the most number of salmon remaining.

My thoughts on the game
Upstream is an interesting tactical race game – though with maybe a few more choices that you would be led to believe at first glance. There is definitely some benefit to keeping your fish alive, as they are worth one point each at the end of the game, but usually there is more benefit to getting a token to the top of the river first because that TOKEN might be worth as much as five points if it can get to the end of the spawning ground by the end of the game.

As the game moves along, the river is constantly changing, with one new row of tiles coming up each turn. Players often have to choose between trying to keep all four of their tokens moving upwards, or sometimes it’s better to sacrifice one (either to predators or to the never ending churn of the rear of the river) so that you don’t have to divide your precious movement points amongst so many different tokens.

The event horizon is never more than 4 tiles, so you have to be able to think quickly on your feet and adapt to the new row of tiles as they pop up at the end of each round. Trying to navigate the different obstacles takes a bit of planning, and it is impossible (IMHO) to get all the way upstream with all 8 of your fish intact. You’ll have to figure out how to get past the different animals trying to eat you, and if you are skillful, you’ll be able to set a few traps to force your opponents into getting themselves eaten. This is often done by filling a tile to its maximum to cause other players to have to either go around or over you into dangerous tiles.

There is an advanced set of rules with uses movement tokens to give movement points to each player, but we haven’t even though of playing with those rules yet as we are having a lot of fun with the base rules and are being plenty challenged by them.

The artwork is simple and clean, and I like this sort of bare-bones style. The fish tokens also look quite nice with the different colors painted on the tokens, but I do wish that they maybe were a bit smaller. When there are multiple tokens on a tile, it is nearly impossible to see what is underneath the tokens, and that sometimes slows things down or creates some confusion when someone unwittingly moves onto a predator space…

The game is a quick one, and each turn doesn’t take too long as you only have 5 points, never have more than 4 things to consider moving, and you only have 2 different options (swimming and jumping). The rules are a bit incomplete, but the publisher has written out a small FAQ which was published on BGG, and is copied here: