The Rise of Queensdale (Spoiler Free Review by Chris Wray) 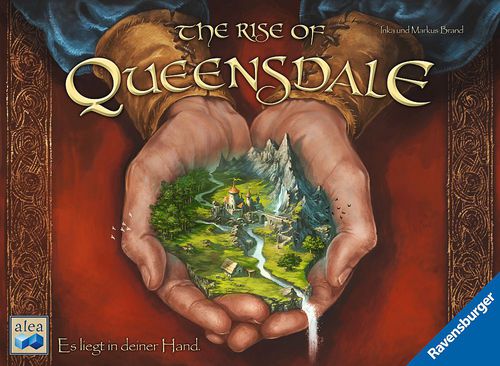 The Rise of Queensdale is a competitive legacy game from famed design duo Inka and Markus Brand.  It is numbered 1 in a new size of alea boxes.

The game is out in German, and an English-language release is planned for around Gen Con.  I was fortunate enough to play a pre-production English copy with three other amazing attendees at the Gathering of Friends.  This review walks through — without spoilers — the key elements of The Rise of Queensdale, and at the end, I’ll offer my thoughts on the game.

In short, The Rise of Queensdale is a well-developed legacy game, and I think it stands above the competition.  I think this will be a big hit in the coming months.

The Rise of Queensdale is nominally a city-building game, with each player owning one of four different boroughs in a region divided by rivers. Players must gather building resources and use them to build new buildings and features in their borough.  At the start of the campaign they have only the ability to convert resources to coins and then store a few of those. Over the course of the game, they’ll be building features to help with storage, production, and other advantages.

Over the course of the campaign, a player needs to advance into nine different epochs (i.e. win nine different games), and the first player to do so wins the campaign. The game could, in theory, last anywhere between nine and 33 games, but in all likelihood I think most groups will finish it in 20-25 plays.  Our group took 20 plays, over about 25 hours.

The game comes with a plunger — a royal plunger, in fact — to extract tiles on which you build new buildings. 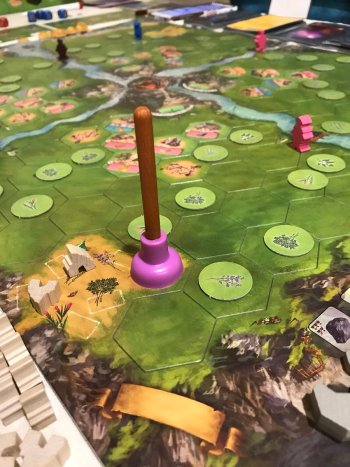 The main mechanic is dice-based worker placement.  At the start of each round, players roll their five dice.  On a player’s turn, he places one of these dice one of the designated spaces corresponding to the result rolled.  For example, if a player rolls wood, he can place it on one of five wood spaces to receive one wood, or two if he is the first person to use the wood space.  All four of the basic in-game resources (wood, clay, stone, and coins) have their own face on the dice. The other two faces are for actions. To mitigate the luck factor, players may, at any point on their turn, reroll any of their dice by discarding a resource.  And payers may also spend the corresponding resource to use a resource die face as an action die.

There is a main action board showing the in-game actions possible.  These spaces allow you to build, convert resources, gather resources, walk around the game board gathering herbs, draw workers, or take special actions.  More and more of these spaces are added as the campaign progresses.

Certain in-game activities (building buildings, building huts to gather more herbs, or advancing on the glory track) earn you victory points.  All players start the campaign with the same goal — to get 10 victory points — but as the campaign progresses, the goal becomes higher and higher.  By the ninth epoch, players have to earn 70 victory points.

But as you progress, you are rewarded with more and more victory points for doing the same activity, so the game isn’t really longer later in the campaign.  If you complete your goal, you get to unlock upgrades for yourself, such as starting resources.

The game has a couple of decently strong catch-up mechanics.  The primary one is that if you don’t get to the next epoch, you take a seal, and you can get a second seal if you were close to achieving your goal.  These can be traded in for stickers that upgrade your dice. For example, you can get a sticker that gives you the option of either collecting a resource or using an action.

In short, this is a dice-based worker placement game that grows in complexity as the campaign diverges.  It took us 20 plays over 25 or so hours.

Is this actually a legacy game?

Yes, this is actually a legacy game.  Buildings and resources can carry from one round to the next, and that’s a big part of your strategy.  You can also get special abilities that carry. I spent the early part of the campaign setting myself up for future games, and that paid off for me.

I don’t think it is particularly replayable: by the end, you’ve probably applied 100 or more stickers to the dice, game board, action board, and rule book.  If you wanted to do a second campaign you’d need a second copy of the game.

Can you play it after your done?

You can continue playing even after the campaign ends, but we didn’t do that.

How bad are the spoilers?  Could I do a second campaign?

I suspect a person that knows what’s ahead would have an advantage in a second campaign, but not an insurmountable one.

It seemed decently balanced.  As I discussed above, there is a fairly strong catch up mechanic, yet the leader is also rewarded for winning individual games.  I’ve only played two other competitive legacy games — Seafall and Charterstone — and this seemed to do a better job at striking a balance between individual game goals and campaign goals than either of those titles did.  This rewarded long term planning (which is nice), but it never felt like any given player was out of the campaign.

How does it compare to Charterstone?

Regarding the comparison to Charterstone, it is no secret that I wasn’t a fan of that game, and in many ways, I think The Rise of Queensdale is the game Charterstone should have been.  Queensdale had some rules ambiguity at points, whereas it abounded in Charterstone, so I was less annoyed playing Queensdale.  More importantly, gameplay was largely interesting throughout Queensdale, whereas for me that never was the case in Charterstone, which often felt too repetitive.

What’s the deal with the plunger?

Ahh, the royal plunger!  You need to replace hexes on your board, but they can be stuck pretty tightly in their space.  The plunger pops them right out. (As a side note, you’ll need to always store this game horizontally, or you risk your game state being lost.)

I really enjoyed the campaign, and I’m glad I played it.  I predict this will be a big success in the U.S. market after Gen Con, and I could see The Rise of Queensdale cracking the BGG top 100.  This is the first competitive legacy game that I feel really works.

The game isn’t perfect, and my enthusiasm for it fluctuated over the course of the campaign.  At times I loved it, especially toward the start, but at times the campaign can feel slow moving and repetitive.  That might just be me: I rarely play games more than 5 times, and I played this one 20 times in a few days. But most of the new mechanics come out when a player reaches a new epoch for the first time, and if that isn’t happening, the campaign can start to drag.

The game is more mechanically driven than story driven (though there is a story), so fresh gameplay elements are necessary to keep it moving.  Fortunately, the next epoch is always around the corner, and even at the slow points, however, I was enjoying myself.

I enjoyed the narrative arc — it certainly made sense and was pleasant enough — even if by the end I found myself skipping flavor text.  I generally skip flavor text, so that may be more a reflection on me than on Queensdale.

And even if the campaign can feel like it slows down, gameplay within individual games never seemed to drag.  The decision space is restricted by the dice you have before you, so players tend to take their actions quickly, and gameplay moves at a nice pace.  Of course, the downside to having the dice restrict actions is that you can be at the mercy of what you roll. Our games only had three to four rounds — meaning we pulled back our dice and re-rolled them that many times — so getting a bad roll can be damaging.  In the end, however, players can discard a resource to reroll, and The Rise of Queensdale seemed to do a good job of not making gameplay feel arbitrary because of luck-driven factors.

When you entered a new epoch, the gameplay can shift in delightful ways.  You can get different goals, and that keeps the game fresh. The downside — which is the case with all legacy games released thus far — is that you have to interrupt gameplay (or add time between games) for rule reading.  Queensdale did a good job of keeping the major texts for the end of a game, but even then, after a couple of epochs, it felt like the rule reading took as much time as half a game!

Some of our games only lasted 45 minutes, and on the high end they went slightly longer than an hour.  If you want to play two games in a night, I’d advise still setting aside 150 minutes: 2 hours for gameplay, and ½ an hour for rule reading, stickering, and setup.

The component quality was nothing spectacular, although the plunger was a cool touch.  What did stand out, however, was the art: Michael Menzel (of Legends of Andor fame) outdid himself.  The game at times felt vaguely Andor-ish, and part of that was the art, but I suspect part of it was also because of the theming here.

It was easy to learn at the start, though I’d still describe this as a gamer’s game.

Overall, The Rise of Queensdale game felt exceptionally innovative, and it offers several mechanics that I could see being implemented into other legacy-style games.  And it also felt balanced: the catch up mechanics were decently strong, but the game also rewarded long-term planning.

On the whole, I’m impressed.  I think many groups are going to love The Rise of Queensdale, and the Brands have designed something that feels innovative and engaging.  Of the 20 individual games, I’d rate a handful a 6/10, but most of them I’d rate 7/10. Throw in the legacy aspect, however, and my final BGG rating was 7.5/10.

This entry was posted in Reviews and tagged Alea, board games, Gen Con 2018, Inka & Markus Brand, Inka Brand, It's Already Out in Germany, Legacy Games, Markus Brand, Ravensburger, reviews, The Rise of Queensdale. Bookmark the permalink.