Thanos Rising: Avengers Infinity War is a new mass market game from USAopoly, obviously tied into the blockbuster movie release from earlier this Spring.  In this cooperative game, player work together to recruit superheroes and defeat Thanos before he is able to power the Infinity Gauntlet and destroy the universe or whatever else dastardly the jeweled Power Glove will do.

Half of the table will be taken up by the Infinity Gauntlet – and the six Infinity stones that will power it.  Each of these stones sits upon a disc filled with cubes. When all the spaces on the card are filled with cubes, that particular Infinity Stone is placed on in the Gauntlet.   This is one of the ways to lose the game (and destroy the universe).

The other side of the table has a nonagon, split into 3 regions, with a huge Thanos figurine in the center.  Each of these regions has three cards dealt to it – these cards can either be Heroes (waiting to be recruited) or Villians (which will attack you).

Each player gets/chooses a Team Base – this provides you with a starting hero, say Captain America or Gamora, as well as a unique special power which goes with your team.  Once the starting heroes are removed from the deck and placed near their respective home bases, the rest of the deck is shuffled, and nine cards are laid out around the nonagon, one card per side. 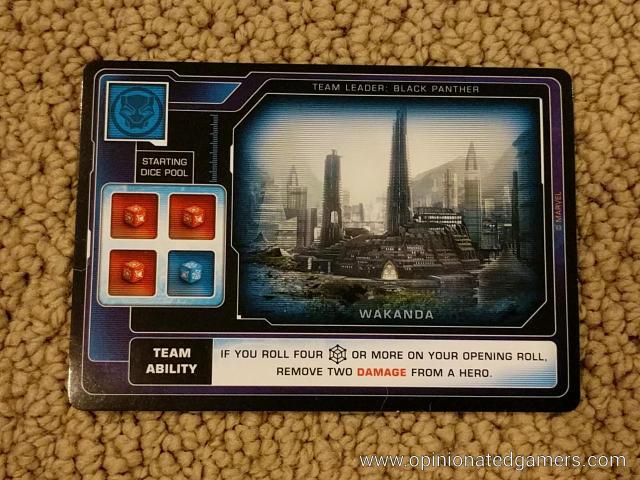 On a turn, the active player does all of his phases, but as this is a cooperative game, all the players are encouraged to discuss what strategy should be employed on that turn.  The active player first places his colored token in one of the three sectors of the card ring. This determines the cards (heroes or villains) that the active player will be able to influence this turn.

Then, the Infinity Stone die and the Thanos Die are rolled.  The Infinity Stone die will give you a color, and a cube is added to the matching Infinity Stone disc on the board.  If all 5 spaces of a particular color are filled, Thanos has captured that stone, and it is placed in the Infinity Gauntlet.  The disc that used to collect cubes of that color is flipped over, and each color has a unique penalty which will now be applied each time that color is rolled.  The Thanos Die can rotate Thanos, or it could activate all villains NOT in Thanos’ current sector, or it could cause you to roll the infinity die again.

Once the dice are resolved, Thanos then gets a chance to attack; he attacks all heroes in the sector that he is facing.  This includes the active player if the active player’s token is also in that section. All hero cards in that sector take one point of damage (a damage cube is added to their card).  If a Hero card’s damage meter is completely full, that Hero dies, and the card is placed in a Hero discard pile. To reward those who are reading so closely, we’re having a giveaway for two copies of the game.  Contact us with the name of the shape used to place cards around in this game to enter. This happens for every hero card on the table in that sector, and if the player’s marker is in that sector, also to EVERY hero that is in front of the player!    Then, if that wasn’t enough… any villains that are present in Thanos’ sector also get to do their own attacks! Just follow the directions that are printed on each villain card.

Then, the hero gets a chance to fight back!  Starting with the four Power Dice shown on the Home Base card, and then adding in any other dice as allowed by actions on their collected Hero cards, the player rolls all his allocated dice.  There are four different colors of dice (red, blue, black, and green), and each color of die has a slightly different icon allocation. 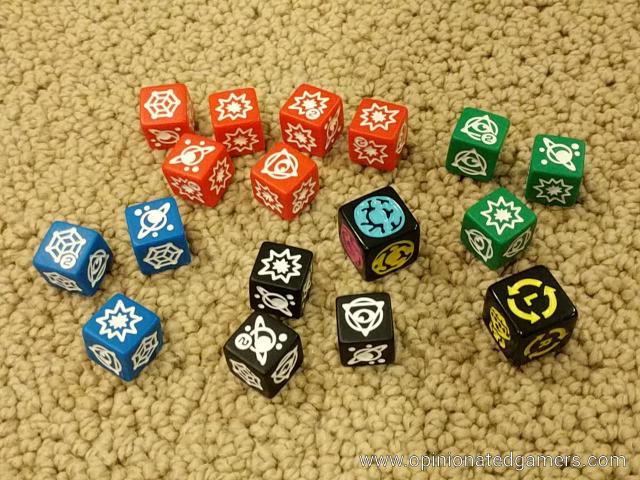 As long as you were able to allocate at least one die legally, and note that you can only add dice from a particular roll to a SINGLE card, you may roll all the remaining dice again.  Continue to do so until you have either placed all the dice or you are unable to legally assign a die. Then, you resolve all cards which have all their icons covered. Again, if it is a hero, you take that hero and add him to your stable of crime fighters at your base.  If it is a villain, you place a damage cube on that Villain AND you also get to draw a Bonus Token. These tokens are one-time special abilities that can provide special actions, additional dice or die icons, etc to be used in a later turn. The next player then goes through the same sequence of phases, and so on, until a game-end criteria is met. 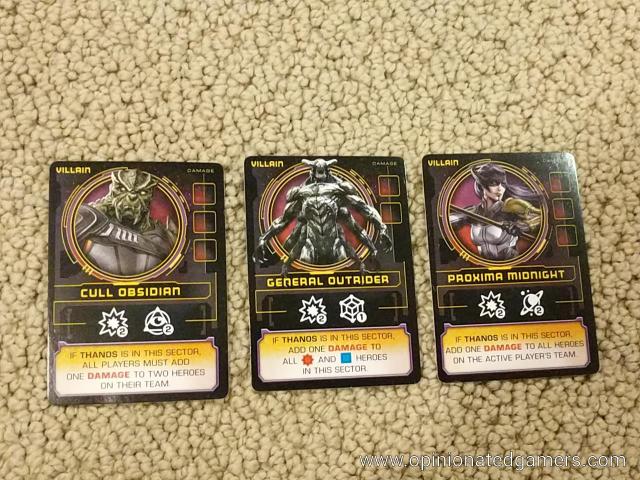 The game is immediately won if the players have defeated the requisite number of villain cards before Thanos is able to collect all six Infinity Stones.  In the basic game, you must defeat 7 Villains to win. This is the only way to win. There are however, multiple ways to lose. If Thanos gets all six Infinity Stones, you lose.  If Thanos and his villains defeat ten Hero cards, the team loses. Finally, if any one player loses all of his Hero cards in front of him, his base is defeated, and the team loses.

If this was too long for you to read, there is also a how to play video online. http://usaopoly.com/games/thanos-rising-avengers-infinity-war

You can also enter our game giveaway by telling us via email which hero card is shown at 7:47 in the video.

Thanos Rising is a nice entry level cooperative game.  There are not too many picky rules here, you can get started quickly and once you learn the different phases of the game, each turn moves along swiftly.  There is room on each round for the players to discuss what might be the best plan of action – usually deciding which Villain needs to be attacked or which Hero should be possibly recruited… This will determine what sector to place the player token into.  But, after that, it essentially all comes down to the dice.

For me, this is a nice balance in a co-op game.  Players definitely have a chance to discuss plans, but the dice simply cannot be quarterbacked.  (Though, if you have the ability to do so, let me know as I have a Las Vegas trip coming up, and I could use that skill at the craps table…).  The attacks can be quite unpredictable as the areas which attack you are determined by the roll of the dice as well. So, you just have to prepare yourself as best you can for what might be coming, and then roll with it…

There is a good sense of tension in the game as the two discard piles (Heroes and Villains) race towards the game ending count.  There will definitely be some turns where it makes more sense to try to add Heroes to your base in order to get their abilities, while other times, the team needs to really try to defeat a particular enemy who has an attack that is really hurting the team. 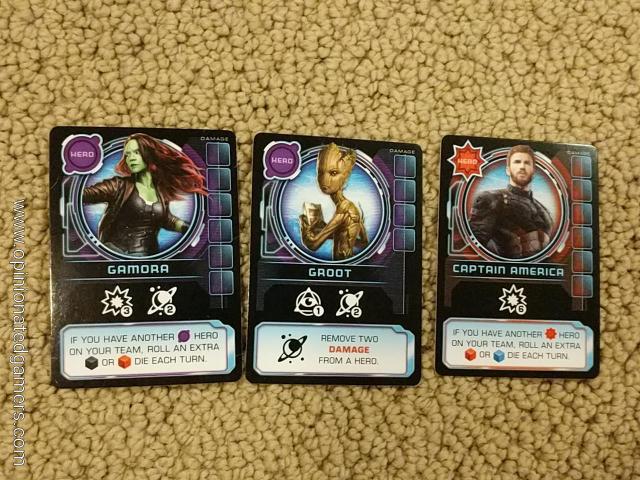 Components are good for the most part.  The Avengers art is nice, and the Infinity Gauntlet is always an eye catcher as is Thanos in the center of the table.  I do wish that it was a bit easier to rotate Thanos, ours seems to get caught on the inside of the deployment disc. Also, I question the placement of the turn order reminder on the back of your Team Base card.  It would have been much more useful to have a separate card (there are only 46 cards in the game as it is) – New players tend to always forget to look on the other side of the card for this. 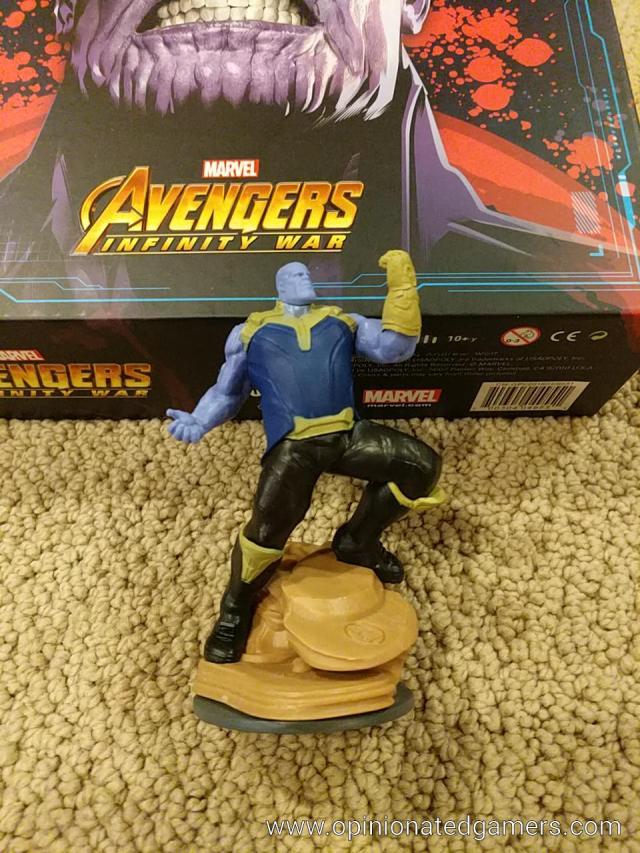 While I think the game works well, and is easy to pick up, it tends to stay around just a little bit longer than I’d like.  Our games are still coming in at just above an hour, and this is the sort of game that really feels like it should be 30-45 minutes.  If/When we play it again, I might see whether you can generate the same sort of tension by shortening all of the timers – maybe start with one cube on each Infinity Stone disc, reduce the number of heroes needed to lose to 7, and the number of villains to 5?  I’m not normally into house rules, but the actual rules tell you to modify any or all of these criteria to get the level of difficulty that you want!

This game won’t ever supplant Samurai Spirit or Ghost Fighting Treasure Hunters as the favorite in my group, but the accessibility of the game, as well as the well-known movie tie-in will likely keep this one around as a game I can pull off the shelf to introduce novice gamers to the world of co-ops.  You might have the chance to do the same if you can find either of the two ways to enter our giveaway for this game.  Entries accepted through Friday 18 May 2018.  Winners to be announced in the comments below.

THE GIVEAWAY IS CLOSED – CONGRATS TO OUR WINNERS: FRANK M. AND BRANDON J.

Dan Blum (1 play): I thought it worked well enough and had a reasonable amount of theme, but I agree with Dale that it just feels too long. We played on easy mode and still got kind of bored with it before the end of the game. However, as noted it should be easy enough to tune the game length so I’d say this is worth checking out if you’re a fan of co-ops and/or the MCU.