ONE OF US BECOMES AN EVIL GOD 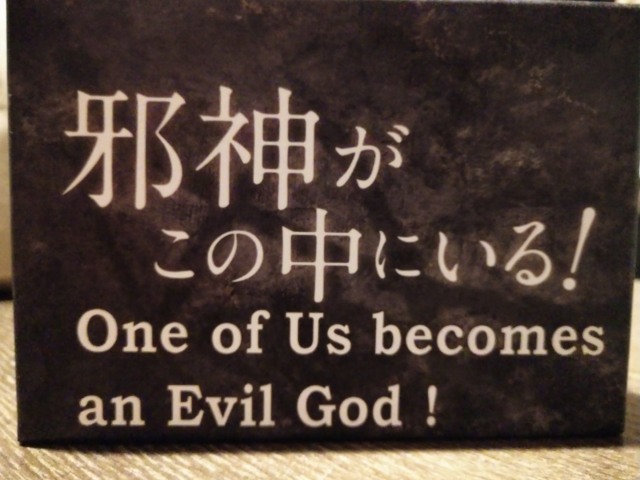 TIMES PLAYED: 3, with a copy I purchased

Part of the reason I play games is for the social aspect; it’s a way to connect with friends and family over a shared activity, and my enjoyment of a game may increase or decrease, depending on who I am playing it with. I am often not a fan of cooperative games, but I have a group of friends with whom I would play just about anything. We all have an affinity for fighting monsters, so when I saw One of Us Becomes an Evil God I was intrigued and picked it up specifically to play with them.

To start the game each player is dealt a Character card face up. There are 9 different cards in the game, and each character has a feature ability that is always in effect as well as a skill that can be used as described on the card. The card also has both a base strength and base insanity level. 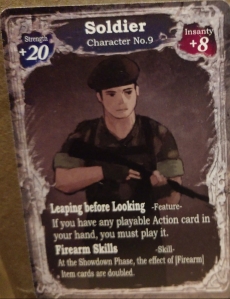 Each player is also dealt a face-down Insanity card. There are 11 cards with values ranging from 0 (not at all insane to 100 (completely insane). Players may look at their own card, but may not reveal theirs or look at anyone else’s card.

Each player is also dealt 3 Pre-Descent cards, which will be used to take actions. Once the cards are dealt the deck is divided in 3; a time flow card is shuffled into each third and then the cards are combined into one draw deck.  There is also an event deck.

There are four  types of cards:

Item cards are placed next to the character card of any one player. The card can be played face up or face down. Players may not look at cards that have been played face down; the effect of the cards will be revealed later in the game. Items generally have an effect on a players Strength or Insanity level.

If you draw a Time Flow Card, play stops and an event card is drawn and played.

After the third Time Flow Card is drawn all other players (aside from the one who drew the card) take another turn using only the cards already in their hand.

The game now enters the Evil God Revelation Phase. Players discard any remaining cards in their hand and reveal their insanity card as well as any other face down cards in front of them. Players total their insanity by adding any item or event cards to their face down insanity card.  The player with the highest insanity level becomes the Evil God; if there is a tie the player with the higher character card number is the Evil God unless all tied players have an insanity level of 100 or more, in which case they are all Evil Gods. All other players are still human.

The discard pile is shuffled and now becomes the Fate Deck.

The Evil God team adds up their insanity level and then flips over the top card of the Fate deck; if the first digit of the card’s Fate Point number matches the character number of any member of the Evil God team an additional 20 points is added. Players then consult the Evil God Descent Chart to see which Evil God is descending.

Now the Evil God team calculates their strength, based on the Evil God Card (their characters and equipment are no longer relevant), including the feature skill of the Evil God and any other applicable effects. . They draw cards a number of Fate cards equal to the number of players in the game minus 1, and add the Fate points from each card, with a 20 point bonus if the first digit of the Fate number matches the Evil God card.  This is the Evil God’s strength.

The human players then add up their strength by calculating the strength value of each Character card  plus any Item Cards. Each human player then draws one Fate card and adds the Fate points on those cards, with a 20 point bonus if the first digit of the Fate card  they drew matches their character number. The total number of all players is the Human Players strength.

The Team with the higher strength is the winner.

I want to like this game. I like card games, I like manipulating special abilities and I like Cthulu and his minions, but this game fell flat for me. To start with, the rules are not well-written, which makes the game hard to learn and hard to understand. Some of the problem  is due to the translation not being great; once you know how to play it can be taught much more easily.  However, the game has lots of fiddly rules that, even when you clearly understand them, can be confusing and seem to be there to make the game seem like it has more to it rather than for the benefit of the game or people playing it.  If you only have item cards you are playing them mostly randomly, because you don’t have enough information to know who might be on your team. Even if you do have some search cards, you only know about a small number of players, and what you know is pretty broad, so it doesn’t help much. At the end of the Pre-Descent phase random card draws will make or break each team, and then random card draws will decide who wins – it doesn’t have much to do with the skill of the players.

I do like the draw two cards and put one back mechanism, which both helps ensure you will have a card you’d actually like to play and might allow you to leave a card for the next player if you think it will be helpful for them. The artwork on the cards is good, and the cards are of good quality. The box is small and sturdy and holds the components well and stays closed when transported.

I am happy to have tried this game based on the theme, but I don’t think it is going to see a lot of play for me. I’d be willing to teach and play if others are interested, but it wouldn’t be something I’d suggest; it’s just too random with a facade of strategy for me.

2 Responses to ONE OF US BECOMES AN EVIL GOD