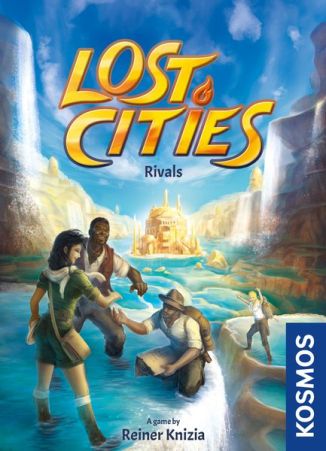 My family has several Lost Cities/Keltis fanatics, and I am myself a huge Reiner Knizia fan, so I was excited to try this spinoff.  I’ve been impressed, and Lost Cities: Rivals has become one of my favorite games from Gen Con 2018.

Back in 1999, famed designer Reiner Knizia released Lost Cities, a 2-player card game that went on to win the inaugural two-player International Gamers Award in 2000 and sell more than 180,000 copies.

Several years after Lost Cities was released, Knizia designed an offshoot called Lost Cities: The Board Game, which was picked up in the United States by Rio Grande.  German publisher Kosmos wanted a more abstracted game than LC:TBG, and to accommodate that request, Knizia designed the game known today as Keltis, which is distributed throughout most of the rest of the world.  Keltis would go on to win the 2008 Spiel des Jahres and sell more than 600,000 copies.  Keltis itself spawned numerous other games, including another card game (Keltis: Das Kartenspiel), a dice game (Keltis: Das Würfelspiel), and a travel game (Keltis: Der Weg der Steine Mitbringspiel), plus expansions.  If you’re looking for an overview of the series, I highly recommend Luke Hedgren’s article “The Evolution (Intelligent Design?) of Keltis”.  I also once wrote an expanded history of Keltis as part of our SdJ Re-Reviews series.

Recently, Lost Cities: The Board Game made its way to the German market, and both it and the original Lost Cities (which is now called Lost Cities – Das Duell) received a facelift.  Lost Cities: To Go hit the market simultaneously, and it has quite a bit in common with Keltis: Der Weg der Steine Mitbringspiel.

Each player begins the game with 2 of the starting wager cards, both showing face up.  The game comes with 36 coins, and those are divided evenly among the players. The numbered expedition cards and the wager cards are shuffled together, and then that deck is split into approximately four equal parts.  One of the four decks becomes the first draw deck.

On a player’s turn, he or she either (a) reveals a card from the current draw deck, placing it face up in the center of the table, or (b) starts an auction.  The first action is fairly straightforward, but that comprises most turns of the game.

If starting an auction, that player makes an opening bid, and then each subsequent player must make a higher bid or pass.  The auction proceeds around the table until all but one player has passed. That player pays his or her money to the middle of the table, taking any and all cards he or she wants and placing them on his or her expeditions (as explained below).  Then, the player may discard one card from the center. Finally, he or she flips up another card from the deck (or the next deck if necessary).

Each player can have one “expedition” of each color.  The cards from 2-5 each have one footprint, and the cards from 6-10 have two.  Players will earn victory points (called “fame points”) at the end of the game for having these cards.  But there’s a twist: cards must be played in ascending order. So if you play the 6 after the 2, you’re no longer able to play the 3, 4, or 5 of that expedition.  Because the lower-value cards have duplicate cards in the deck, a number can follow itself: for example, a 3 could be followed by another 3.

There are also wager cards, which can only be played at the start of an expedition.  These double, triple, or quadruple the fame points from your expeditions if you have 1, 2, or 3 of them, respectively.  Additionally, if a player has four or more numbered cards in a given expedition, they earn 8 victory points, though that bonus in unaffected by wager cards.

When one of the four decks is used, players divide the money in the middle equally, leaving any coins in the center that couldn’t be so divided.  This is the only way to get additional money in the game! Players then start using the next deck.

The game ends when the last card of the fourth deck is revealed.  At that point, players add up their points from their expeditions.  Each coin also counts as one point. (For the curious, unlike in Lost Cities, there is no penalty for starting an expedition in Lost Cities: Rivals.)  Highest score wins.

I first played Lost Cities: Rivals with W. Eric Martin and a couple of friends at Gen Con, and I immediately loved it.  Lost Cities is one of my most-played games of all time, and I’m also an auction game fanatic, so I was always going to enjoy this.  But gameplay has exceeded my expectations, and I could see this becoming a personal favorite.

As a preliminary matter, for fans of Lost Cities, I must note that this doesn’t really feel like that classic, which is a game defined — at least to me — by hand management.  Sure, both are card games where you’re pursuing expeditions, and in both cards must be played in ascending order.

But the similarities largely end there.  As I said in the intro, Knizia’s latest creation is primarily a mix between three of his classics: the ascending card play from the original Lost Cities, the auctions from Traumfabrik, and the press-your-luck mechanic of Ra.  Rivals is markedly different from its predecessors in the Keltis/Lost Cities family because is a game defined by its auctions.

From my vantage point, Knizia has always been at his best in his auction games, and he shows his cleverness here.  The bidding in Rivals is fascinating for a couple of different reasons.  First, while the value of cards is somewhat obvious towards the end of the game, that isn’t generally true at the start of the game, giving Rivals a bit of a press-your-luck feeling towards the start, with gradual clarity as the game goes on.  Second, I’ve been intrigued with the zero-sum auction mechanic of Traumfabrik, and it was cool to see Knizia return to it here.  It makes for an interesting calculus as each draw deck dwindles: you can spend coins, knowing you’ll get part of them back, or you try to build a bigger financial war chest than your opponents.  The latter strategy rarely works, but it is still fun to try.

The auctions are the star of the show, but the press-your-luck aspect of the game is nearly as fascinating.  If you win an auction, you can take any and all cards you want from the center, plus discard one. Flipping additional cards may sweeten the pot for an auction you intend to win anyway, but you also run the risk of putting in cards your opponents need, which could just end up pricing you out of the auction.  If this center has cards you want but your opponents don’t, the safest strategy is to just start the auction, but if the opposite is true, it might be better to keep flipping.

My biggest complaint about the game is the card artwork, which is attractive but not entirely functional.  There are five colors in the game, but the colors on individual cards vary from each other, sometimes leading the greens to look more like the blues, for instance.  Each card has a symbol to denote its suit, which helps, but the coloring on some of the cards was an odd choice.

The rulebook was well-written, and gameplay is decently easy to understand.  I’ve been able to teach players Rivals in under 5 minutes.  Familiarity with Keltis/Lost Cities isn’t necessary, and in fact, I’ve had two friends that struggled to come to grips with the fact that (a) unlike in Lost Cities, there isn’t really a risk to starting an expedition and (b) unlike in Keltis, cards must be played only in ascending order.  Our games are taking around 25-30 minutes, and I find that the games plays best with four players.

Will this replace Lost Cities?  No, and in fact, I don’t even know that this is as good of a game as that best-selling classic.  But on its own, Rivals is a fantastic game, especially if you’re intrigued by auctions.  And given the low price point the publisher has set, this is one I enthusiastically recommend checking out.  So far, this is one of my favorites from Gen Con 2018.