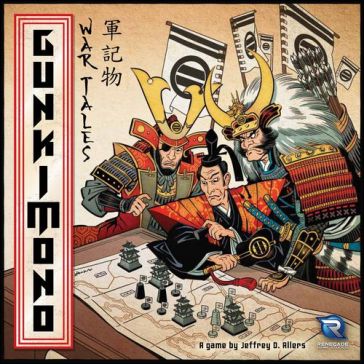 Gunkimono is a tile placement game in which players take on the role of Japanese daimyo, plotting their military advances across the countryside.  The game was originally farming themed and named Heartland, but Renegade Game Studios re-themed and re-released it at Gen Con this year to a fair amount of enthusiasm.

Gunkimono is a game with enough depth and strategy for gamers, yet it is also approachable enough for non-gamers.  Add in the fact that it works with with a range of player counts, and this tile placement game is an excellent addition to many game collections.

On a player’s turn, he or she simply takes a tile from his hand and places it out on the gameboard.  At the start of the game, a player has eight tiles in his or her hand: 3 “large army” tiles consisting of two different colors on two squares, and 5 “small army” tiles of a single square, one of each color in the game.

If a player plays a large army tile, he’ll draw a new one (from a face up display or off the top of a stack) at the end of his turn, but the small army tiles do not replenish.

As gameplay advances, tiles will be placed over each other, and the game board will rise into three dimensions, with tiles sitting on several different levels.  A tile can be placed on the gameboard as long as the following rules are followed: (1) a square cannot be placed over a space of its same color, and (2) both squares of a large tile have to sit on the same level.  A player may, optionally, place one of his small army tiles facedown to level a space if that allows him to comply with the same-level rule. 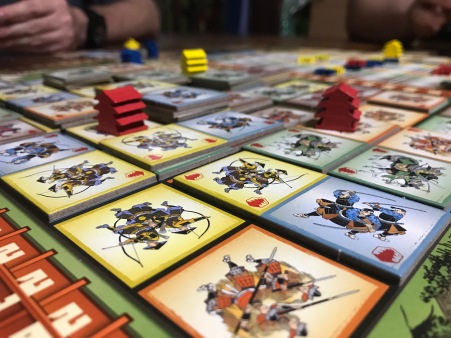 After a tile is placed, a player scores points for each square.  Players can score either victory points or honor points.

Victory points are all that count for end-game scoring.

Honor points earn you in-game bonuses.  Getting all 5 of your markers to pre-set levels gives you a stronghold.  You can place your stronghold piece on the board, in any place of your choosing, and from then on in the game, you’ll get as many points as are in your stronghold’s group as the end of your turn.

However, adding a stronghold changes gameplay in a few ways.  First, that space can no longer be built on. Second, you do not score victory points any longer for placing into the grouping containing a stronghold (whether it is yours or another player’s), though you may still take honor points.

At the end of an honor track there are victory point bonuses: as a player reaches the final space, he or she takes a tile showing how many bonus points he or she gets.

The game ends when the end-of-game tile is revealed.  There are equal turns. At that point, the player with the most victory points wins!

I was a fan of Heartland, so I was naturally excited to try Gunkimono.  The farming theme of Heartland had its charms — especially for those of us from rural communities — but the war theme of Gunkimono lines up nicely with the game’s mechanics.  Plus, Renegade did a fantastic job with the production value here, and Gunkimono is eye-popping as the tiles begin to emerge from the table.

The game abounds with meaningful decisions.  This isn’t just about where you place your tiles, but when you place them and how you choose to score them.  At the start of the game, it is tempting to focus solely on the honor track, as getting your strongholds out can pay valuable dividends.  But doing so isn’t necessarily worth it if you’re giving up significant victory points in favor of those honor points.

More importantly, even if you do manage to get your stronghold on a good space, other players will likely cut it off, reducing the appeal of your hard-earned prize.  For example, I’ve built my stronghold into a territory earning almost a dozen points, only to have it earning just 2-3 points a couple of rounds later as other players went on offensive.  In that regard, Gunkimono is both highly interactive and delightfully cutthroat.

As alluded to above, at first glance, it seems that Gunkimono would be mostly about where you place your tile, but I’ve come to think the game is all about timing: in my experience, the game is won or lost based on when you build your strongholds, how long you hold them, and how well you take advantage of large groupings that are forming.  It is a game where planning is rewarded, yet the thinking required is not the sort that drives analysis paralysis.

Having three “large army” tiles in hand — plus the five single tiles — really reduces the luck factor, especially when combined with the ability to pick a tile from the open display.  In my games, the best player has won Gunkimono.

The game works well at all player counts, though I think the sweet spot is probably 3-4 players.  Our games have been taking 45-60 minutes to play, though more experienced groups would probably be able to play a bit more quickly.  The game is easy to teach, and I think the rules could be explained in 3-5 minutes.

I love Gunkimono, and I think this is one of the best tile placement games I’ve played.  As I’ve complained about before, tile placement is a genre littered with mediocre games that can be a bit dry.  But with Gunkimono, gameplay is always tense and engaging.   This game, along with Citrus, is why I consider Jeff Allers to be a master of the tile placement genre.