Well, tonight we got in some early gaming (and a wonderful dinner at Frank Kulkmann’s house). 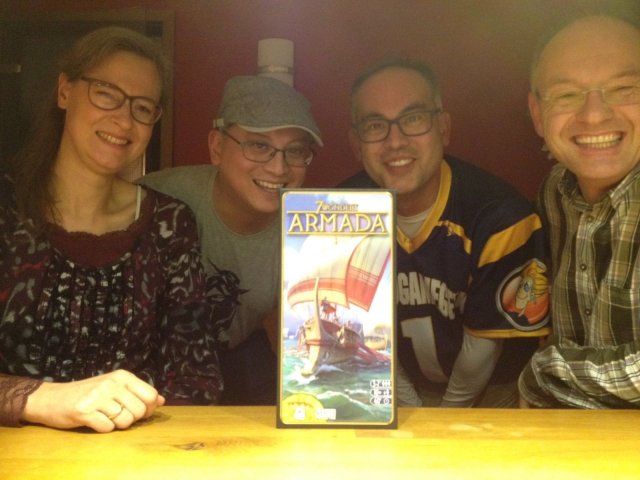 If you have not seen Frank’s website, you should go there now. He has up to the date information on spiel, and perhaps has the best coverage in real time of the event.

Here he is taking a demo meeting on Tuesday afternoon!

But back to the games – 7 wonders armada was on our table. This is a new expansion to the well-known game. We played it without any other expansions so that we could concentrate on the new things in Armada

There are a few changes here. First there is a board which has four tracks on it. You each cadetship in the matching colours that starts at the bottom. Each time during the game if you draft and play a card which matches the colour of the track, and you pay the cost for the step on the track, you can move your ship forward.

The red track gives you naval power points. Naval power is a second war consideration at the end of each round, this time for against all players in the game not just your left hand and right-hand opponent. The yellow track gives you gold, the blue track gives you victory points, and the green track gives you the opportunity to draw a Green Island card every other step.

The green cards appear to be quite powerful with some of them giving some resources or Sciences, some give advantages on moving on the track, others giving exceedingly strong army bonuses.

There are also a few new Armada cards which are shuffled into play, ensuring that you have the chance to see at least a few cards in each game which deal with the tracks on the new board.

We enjoyed our first play, though it is unclear at this time how much this increases the influence of conflict in the game. Now, you have two different words to win, and generally playing red cards to increase your sword army and also gives you the opportunity to move along the track on the board to gain naval power.

By my calculations, in a 4 player game if you win all of your land and naval battles, you can score 42 points. In addition to this all of your opponents will be scoring negative points for the battles that they lose.

Overall, a very interesting first play, and one which I think will breathe new life into 7 wonders for me and my group.

At the other opinionated gamers table tonight, the new game from lookout games was being played, Neom.

This is an interesting tile laying game which appeared to be taken fairly well for the first game. In the somewhat dark conditions of the hotel lobby, and with some unfamiliarity with the tiles, it did seem like some of the term stuck a little bit longer as many of the tiles look quite similar. However I think with more experience with the game and the tiles, as well as better lighting, this would not be an issue at home.

This game was reported to be quite some of the seven wonders in the sense that the tiles are simultaneously drafted in then play in order to build your city.

One advantage of the game appears to be that gameplay will be different with each play as players draft 3 Special cornerstone Tiles which change the values of things each game. You can play them in the course of the three round game, but you may never have more than the number of the current round.

The rules have explanations for each of the 150 tiles in the game, and sure in a first game you will likely need to refer to this as you are learning the tiles. But from what I’ve seen, they should only happen in the first game or two.

I am definitely looking forward to my chance at this city builder.

Dale Yu is the Editor of the Opinionated Gamers. He can occasionally be found working as a volunteer administrator for BoardGameGeek, and he previously wrote for BoardGame News.
View all posts by Dale Yu →
This entry was posted in Convention Report, Essen 2018. Bookmark the permalink.