Readers of this blog will know that I’m a sucker for Lookout Games. This company has always hit my sweetspot, and rarely a year goes by without at least one of their games becoming a keeper for me. (Though, in the spirit of full disclosure, I have also done some volunteer work for Lookout, most notably on Agricola – as well as other partnerships with the man who used to helm the Lookout ship prior to it becoming part of Asmodee, Hanno Girke).

This year, two games have specifically caught my eye – the first is Expedition to Newdale. While at first glance, this doesn’t necessarily look at my sort of game – because it’s advertised as a campaign style game; the theme of the game, the track record of the publisher and designer, and the reported ability to play the chapters as standalone games all have made me look at this one closely.

Each game represents one chapter. You can play the chapters in sequence—as a campaign—or on their own. Various maps with different events, game elements, objectives, and actions challenge you to adapt your strategy to the given conditions and use them to your advantage.

The game is set in the world of Oh My Goods! (i.e. the kindgom of Longsdale) – and they make it clear that you don’t really need to know the story from previous games to play this one.

At the beginning of the game you have your personal board, a coal mine as your start building and 5 hand cards. Depending on which chapter you are playing, the appropriate game board sits in the middle of the table.

A view of some of the different boards

Each round has 5 phases – there are 7 rounds in the game.  And since we’re listing stuff, there are 8 games (chapters) in the box.  Each game is supposed to take maybe 90 minutes.  So there is about 12 hours of game in the box, where you will play 56 rounds or 280 phases – in 720 minutes, or 2.57 minutes/phase, which in a 4p setup means that you’re going to do a phase yourself about every 38.57 seconds or so.  Sounds like play will go rapidly?!

So does that really help me know how it’s going to play?  Nah, not really.  But, I’m excited to read that because the components are not destroyed or changed permanently, each chapter can be played and replayed at will.  Thanks to an easy table in the rule book you will always know which cards, game boards, etc. are needed.  And from the description of the different scenarios as well as the different boards, it really looks like you could think of Expedition to Newdale as really being 8 games in a single box! In any event, I’m really looking forward to seeing what this one has to offer.  In the past, my group has shied away from legacy games because we tend not to have the time to commit 40 hours to a game nor the intestinal fortitude to play the same game 20+ times in a row… However, the idea here seems to be less legacy-like and more campaign style, with the advantage that each chunk is small and there appears to be more variation between the different chapters.  (I mean, I can’t wait to figure out what the sailor cards do – and it appears they’re only used in the 8th chapter!)  I would give you more details, as the chronicle rule book outlines all the different setup scenarios, but i don’t want to spoil my discovery of the game – so I haven’t read that rule book yet.Given my positive Lookout track record, I anxiously await my chance to play this one.  Oh, and this quote from the designer has caught my eye:

If you like Oh My Goods(OMG), you will love Newdale. If you don’t like OMG, you should still take a look at it as it is more accessible, has less luck, “better/more” material than just cards, great maps by Klemens Franz etc. So core mechanic has similarities, but in Newdale your workers can also do other stuff than only work in your own buildings. So it is a worker placement and engine building game with several maps, which all tell a story. …but I’m optimistic the game will appeal to a wider audience than OMG. 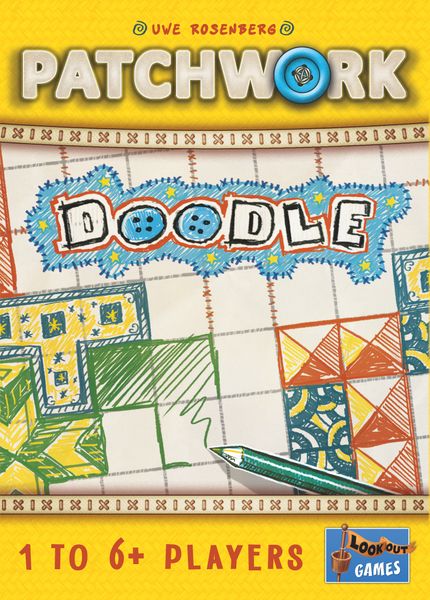 The other Lookout game that I am awaiting is Patchwork Doodle. I have been dreaming of this one since last year when I was able to take a picture of an early prototype banner – with Hanno looking ever so regal in the foreground: 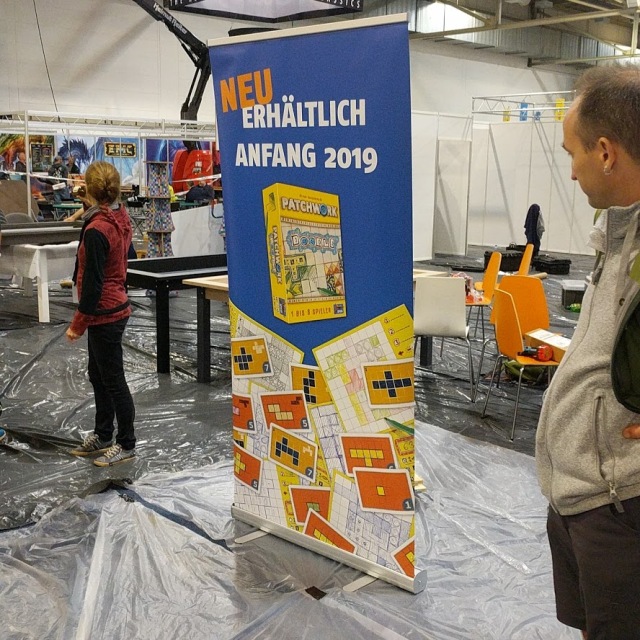 For now, I don’t think i can sum things up than fellow OG writer Eric Martin already has:

Patchwork Doodle is a roll-and-write version of Patchwork, with each player having their own 9×9 grid to fill in over the course of the game. Each player sets up by drawing a unique polyomino card from the starting deck, then drawing that on their sheet.

In each round, players lay out a number of polyomino cards in a circle, then place the rabbit between two cards. On a turn, someone rolls the die, moves the rabbit forward, then removes the card indicated by the rabbit. Each player must draw the polyomino indicated on this card in their grid. Once a certain number of cards have been played, the round ends, players score points, then you lay out more cards for the next round.

Each player has four special actions available to them during the game: You can choose to draw the card before or after the chosen card, you can cut a polyomino into two pieces before adding one piece to your grid, you can fill in a 1×1 space in your grid, and you can do one of the above actions a second time. When you take one of these actions, you mark it off as each can be used only once (except for the one you use a second time, if you know what I mean). You lose a point for each space that you don’t cover, so try to pack everything in as tightly as possible!

Patchwork has been a favorite of mine since it came out, one of the few 2p games to manage to remain in my game collection.  Patchwork Doodle gives me a great chance to expand the reach of this game, as it can handle up to 6 players.  It also has a solo game for when I’m all alone.

I’ve read the rules, and it looks simple enough.  A set of 8 patch cards is laid in a circle with a pawn between two cards.  A die is rolled, and the pawn moves to a card – which all players draw on their board.  Discard the used card, repeat.  After 6 turns, there is a scoring – which sounds convoluted now, but I’m sure it will be easier to deal with IRL.  Look at any area of completely filled in squares and choose any rectangle. Then, in that rectangle, find the largest square.  Score the square of that square’s side length.  Then, for any additional row or column that you can extend the square, you score an additional point… 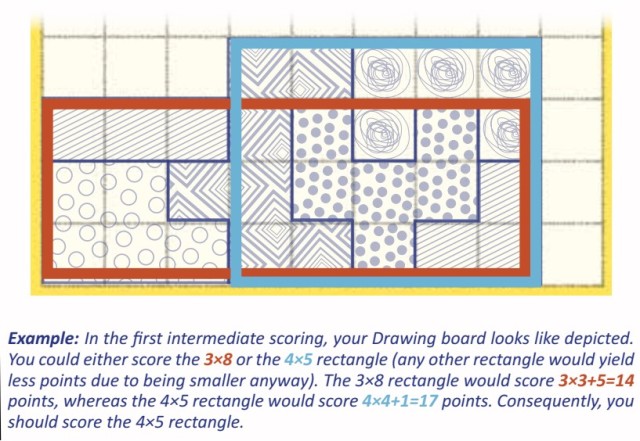 There, that should make more sense now.  That ends the first round.  You’ll play three total.  Take the two remaining cards and place them in front of the pawn, then draw 6 more cards to complete the circle.  And then do it again for another 6 cards. Then score again.  Then draw 6 more cards, do it again… However, at the final turn, rather than rolling the die, each player can simply choose any of the 3 remaining cards to draw for the last turn.

The only other thing to mention is the special actions.  One lets you draw a single square in. One lets you use imaginary scissors to make a single cut on the shape of the round, and then you can use either of the two pieces left after the cut.  One lets you draw the shape to the left or right of the one chosen by the die roll.  Finally, the last one lets you do any of the above three actions again.

You have already scored for your chosen rectangle at the end of each of the three rounds. the endgame scoring (or should I say penalty assessment) is to subtract 1 VP from your total for each unfilled space on your 9×9 grid at the end of the game.

The game sounds easy peasy, and it sounds eminently shrinkable, so I’m already making mental space in my travel kit for this one!

Now, I am awaiting to see how James Nathan will manage to mash this one up. Here is a tweet where he and I are playing his invention of Patchboleo…

Dale Yu is the Editor of the Opinionated Gamers. He can occasionally be found working as a volunteer administrator for BoardGameGeek, and he previously wrote for BoardGame News.
View all posts by Dale Yu →
This entry was posted in Essen 2019, Preview. Bookmark the permalink.