Yes, there is a lot of movement in the halls today: it’s Saturday.

At 9.06 we were at the Messe, but all the Magnificent‘s tables have been already token. We decided for Dice Settlers, which it reveled pretty interested.

Managing your dice, you have multiple usages, including developing technologies cards. Dices differ in colors and faces, which indicate different actions.

At the end, you sum up the point got during the game, and the points for territories and technologies.

The game is undoubtedly well done, and really funny. 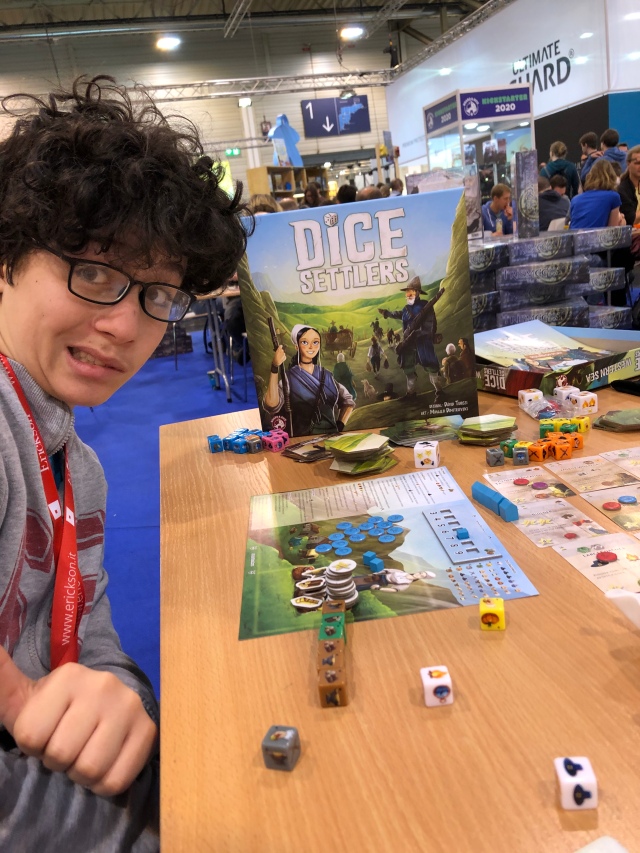 After the game, I met my old friend Timo Multamaki and we tried Dwarf, a new game from his company, “Dragon Dawn Production”. The boardgame will be soon launched on Kickstarter. 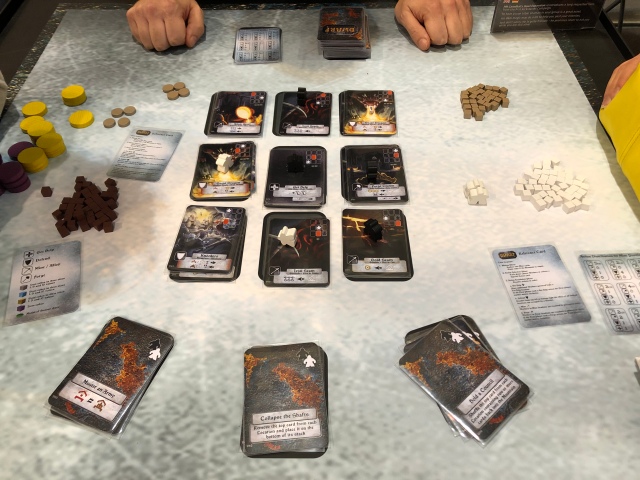 It’s a 2-3 players-worker-placement-card-game, about dwarves mining, fighting and crafting artifacts. The board is a 3X3 grid of cards. Placing on mining cards you can get iron, steel or gold; on crafting cards you use resources to craft artifacts. Instead, Monsters cards have always to be occupied, otherwise they negatively affect all the players. Fighting monsters rewards you with glory, which can be used to activate special events cards.

The game ends when a player crafts four artifacts, and he wins the game. Otherwise, if the deck ends, the player who owns the majority (two out of three) among iron, steel and gold, wins.

How the map evolves, is what makes this game unique. At the end of each round, you reveal two new cards, which replace other two active ones.

Few rules for a nice 2-3 players game. With two decks it can host up to 5.

While I had a meeting at the BGG stand, my kids got the chance to eat and try some quick party games.

Looking for a table, we ended up at Ravensburger. We played Carpe Diem, not a new release, but surely a solid game.

Wandering through the halls, we were so lucky to meet a ‘real’ unicorn. We couldn’t help, but take a picture with him. Caterina and Francesco got also the chance to hug him. 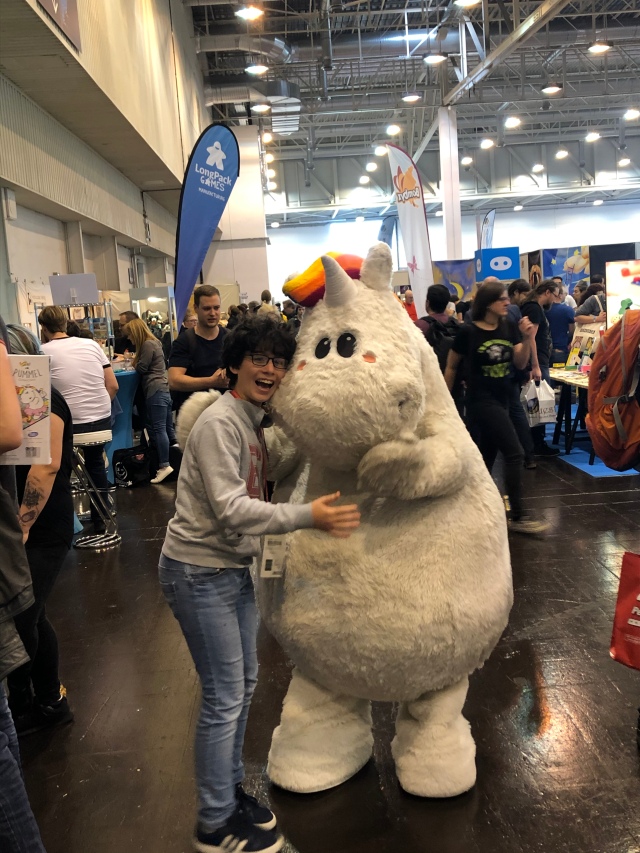 The Saturday was quickly coming to an end. We played Plunderbund, a fantasy euro game that didn’t touch us too much. It was a deck-building engine, in an area control game. There were too few possibilities of personalizing your strategy, for making the game really interesting. After a few round, we realize we were doing the same actions over and over again.

We weren’t really satisfied by it.

Our hourglasses were almost empty, but there was still time for another game, or two. We picked Bloom City, a nice tile-placement game, where you have to build your city. Different tiles score in different ways, like Quadropolis. In order to get higher points you need to plan your strategy well. Every turn you play a tile, the placement determinates from which pile you draw.

It was a nice filler. 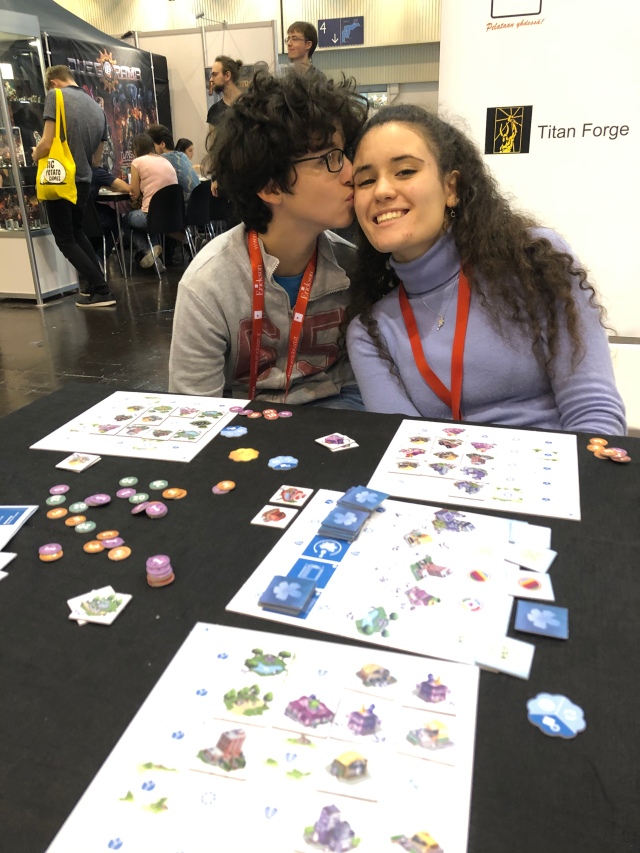 Our last game in the “Essen 2019 Experience” was Seize the Bean, a resource-management game, where you run a coffee in Berlin, trying to get the best reviews from the customers. 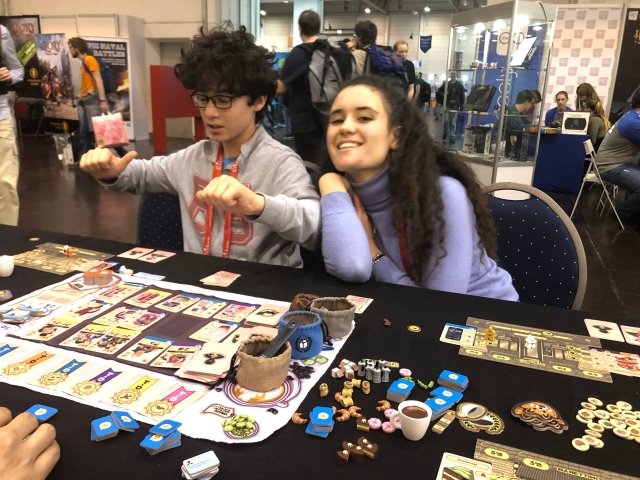 Each turn you have to fulfill customers requests and, in the same time, you improve your coffee shop, in order to serve the more costumers.

We do enjoyed it and we’re surely going to preorder it!

Essen 2019 is over for us. Before leaving the Messe, we made a stop at Cranio Creations‘ booth to celebrate with them their 10th anniversary. It was a good moment for saying hello to old friends and wishing many years of successes (and eating Italian Parmigiano and Salami). 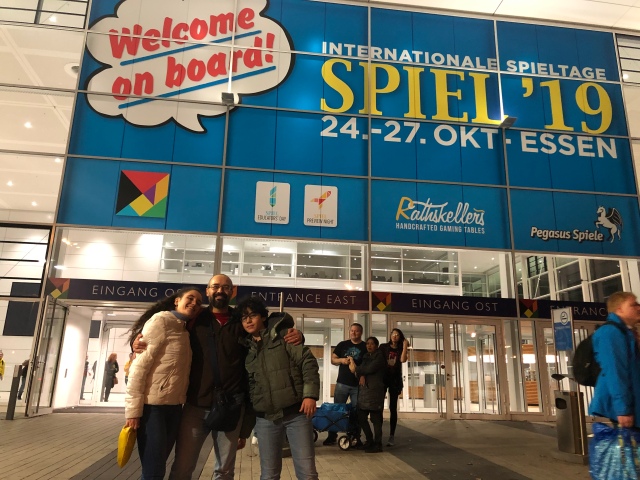 Unicorn meeting and hug: Francesco 10, Caterina out of the rank!!

Andrea "Liga" Ligabue is a game expert contributing to many games related international projects including Gamers Alliance Report, WIN, ILSA Magazine and Boardgamenews. Member of the International Gamers Awards Committee is coordinator of Play - The Games Festival and founder of the project Ludoteca Ideale.
View all posts by Andrea "Liga" Ligabue →
This entry was posted in Reviews. Bookmark the permalink.