Trekking the National Parks was a successful game first released in 2014.  I actually did not get a chance to play it when it first came out, but I became interested in it after playing its successor, Trekking the World – a game we reviewed last year…  In this first game, players travel around the United States, visiting different parks, collecting stones and seeing some of the different landscapes from the varied parks.  And to be clear, I have a copy of the “Second Edition” of the game which appears to be substantially different from the original Trekking the National Parks.  It has a fair amount of critical acclaim; my second edition box proudly displays the Mensa Select logo on it – no small feat for a game that started out as an independent release.

The game is played on a stylized map of the US – on which 45 different parks are found (6 major and 39 minor).  3 major parks are chosen at random to be included in each game, and these three along with all the minor parks get a randomly chosen colored stone placed on their location.  A deck of minor Park cards is shuffled and three cards are placed face up in a tableau.  The three cards for the major parks chosen are also face up in the display.  Each player starts with a hand of 2 trek cards, these are in six different colored suits, and the cards can have a number from 1-4 on them.  The rest of the Trek deck is placed near the board, and a display of 5 cards is placed face up next to it.  Each player puts their meeple in the starting area (which is roughly the size of Illinois), and takes their three colored campsites.

Turns are taken clockwise around the table.  On a turn, the active player takes two actions from amongst four different options: Draw a Trek Card, Claim a Park Card, Occupy a Major Park or Move.  They can be done in any order, and the same action can be done twice in a turn. 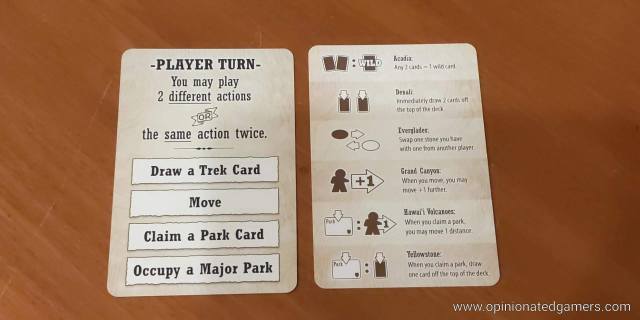 Draw a Trek card – take one of the 5 face up trek cards or the top of the deck. Replenish the display if needed.  If four of the cards are the same suit (color), the whole display is discarded and a new set of five cards is placed face up.  You may never have more than 12 cards at the end of your turn.  If you exceed the limit, discard down to 12 cards before ending your turn. 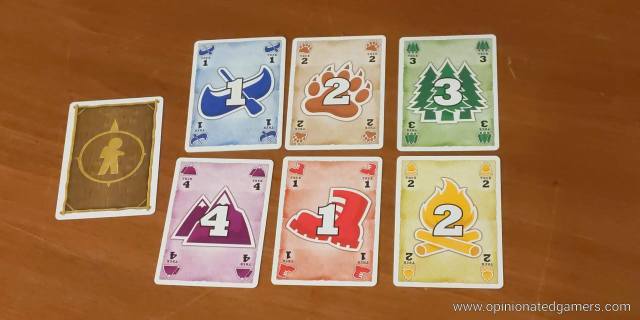 Move – Move your trekker along the paths on the board.  You state your destination and the paths you intend to travel, then you discard Trek cards from your hand whose numbers sum up to the EXACT number of spaces you wish to move. You may not move through another player (except on the start space), but if you end your movement on the space where another player is, you take their place and put the original trekker back on the start space.  There is no limit to the distance you can travel nor the number of cards that you play – the spaces on the board simply have to exactly match the sum of the numbers on the cards played.  If you land on an empty, previously unvisited space – you pick up the stone from that space where you ended movement.

Claim a Park – there are always three face up Park cards next to the board.  You can claim one of them if your trekker is on that location and you can discard Trek Cards matching the colored icons on that Park card.  If so, take the park card, place it next to you, and you will score the shown number of victory points at the end of the game.  Replenish the display to have 3 face up Park cards. 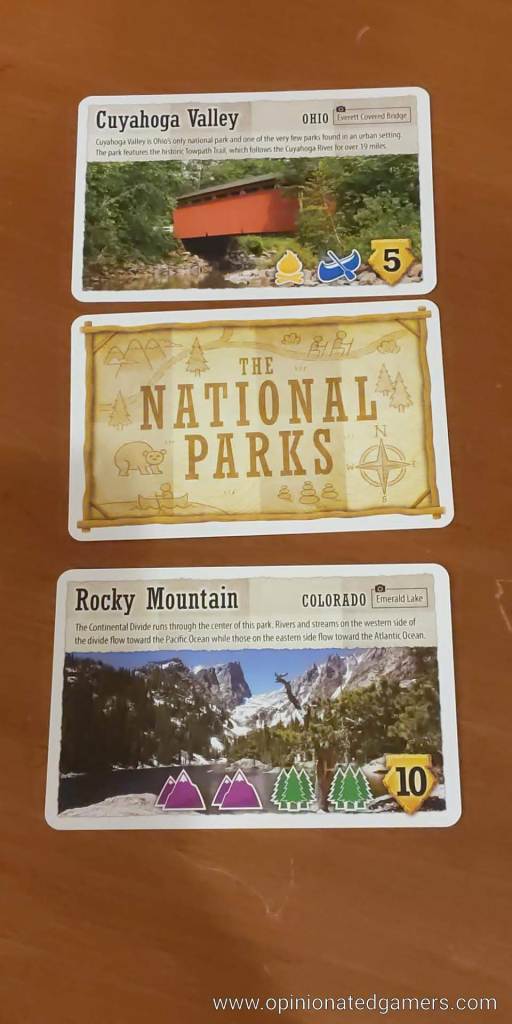 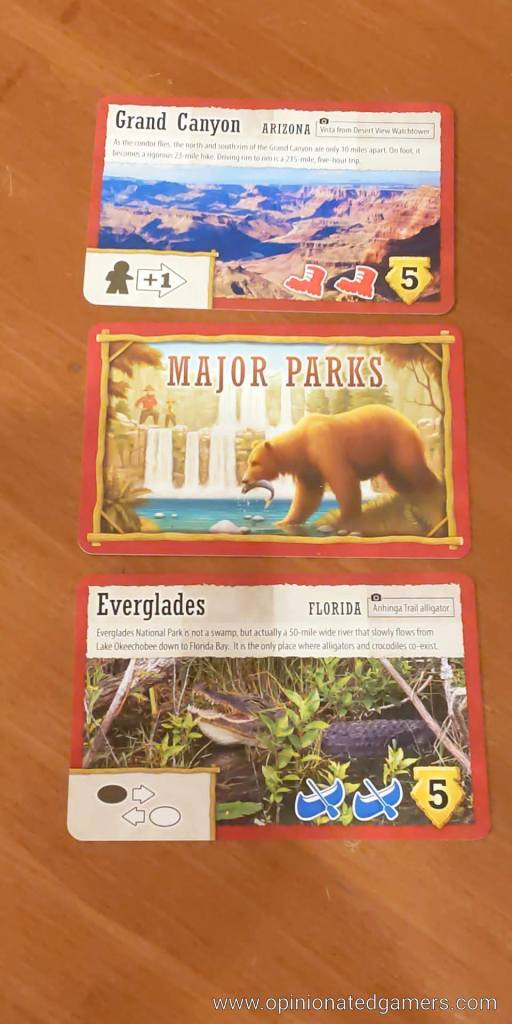 The game continues around the table until the game end is triggered – either by the last stone being taken from the board OR whenever any player collects their 5th regular park card.  When this happens, the game is played to the end of the current round – so that all players have had the same number of turns.   The game then moves to scoring.  There are 4 ways to score points:

Trekking the National Parks is a nicely themed game which has let me do a little bit of traveling during the coronavirus pandemic – when otherwise, I’ve been mostly stuck in my hometown.  Each of the Park cards has some beautiful photography on it as well as a short description of the park.  I’ve definitely learned a little bit of some places I’d never really thought about before.

The map is a little squished – mostly because there are so few national parks in the East of the country – but the layout works well for giving you a bunch of routes between parks.  Sure, the link between Alaska and American Samoa seems a bit long to be a single link, but hey, it’s a boardgame – so deal with it.

The actions on each turn are quite simple, and generally people are either gathering cards to do stuff, or spending cards to move around or to claim Park cards.  It’s quite easy to learn, and even a non-gamer should pick up the rules in just a few minutes.

There is a nice balance between trying to score points from the Park cards as well as moving around the board efficiently to pick up stones.  The Most Stones bonus can not be ignored as they can provide a significant portion of a winning score!

I am not sure, but it seems like there may be a weird turn order preference to the players earlier in turn order.  Everyone starts at the same place, and while there are 5 routes out of the start zone, so that each player could take a different route out – the preponderance of sites to the west make two of the routes significantly better than the others.  There is not much the 5th player in turn order can do other than follow someone out and then bop them back to the start space by landing on them.

Overall, the tenor of the game is light, and it feels like it is positioned to appeal to the non-gamer or casual gamer.  That being said, there are two rules that feel out of place for a light family oriented game. The first is the rule that allows you to end your movement on another trekker and then send them back to start.  It’s un-necessarily cut throat and damaging to their strategy.  Second is the weird tie rule for most stones scoring.  It is really unclear why a tie for first would disqualify both of those players of a bonus while still allowing the next player in rank order to possibly score the second most card.  Neither of these rules fits in with a family level game, and both leave a bad taste in my mouth.

Having played both this version as well as Trekking the World, I’d be hard pressed to choose this one gameplay-wise over Trekking the World for the two rules noted above.  They are unnecessarily harsh, and I would be unlikely to pull out a game for novices that includes this sort of mechanism.  Sure, I could house rule them, or maybe apply the rules from Trekking the World to this one – but that’s not how the rules are in the box, and I’m generally not in the habit of trying to develop games like that.   For nights where we’d rather simulate domestic travel instead of world travel, this could be a good choice… Or, we might combine this with Parks to have a fully themed night around the National Park system.  A solid choice for casual gamers and families for sure.