I have a lot of games. A lot of games that are on my shelves, or on my table being played, that I have told myself that I want to review at some point. For one reason or another, this doesn’t always happen. My goal here on The Opinionated Gamers is that I want to get about one review out per week, but I’d like to write about more games. So I’m taking a page out of Patrick Brennan’s playbook, and we’re going to start writing about games in threes, insnapshot form. This should be a good way for readers to get to know me and my gaming tastes a bit better, and also another way for me to talk about games that I maybe don’t really want to dedicate two thousand words to. Welcome to Three Games.

July 2020 was kind of one of those average months gaming wise. July is the time of year that we usually get the bug to do things out in the world. Add on top of that Covid-19 and I was honestly surprised that we even played seventeen different games, thirty times. My oldest daughter and I put the finishing touches on getting the old Jeep street legal and started plotting out the next steps, suspension work and some welding, and managed to play some old favorites in between. Honestly, we only learned three new games in July, and those three games — Sonora (Awful), O Zoo le Mio (okay) and Here Comes the Dog (ehhhhh, undecided) — only accounted for three plays. 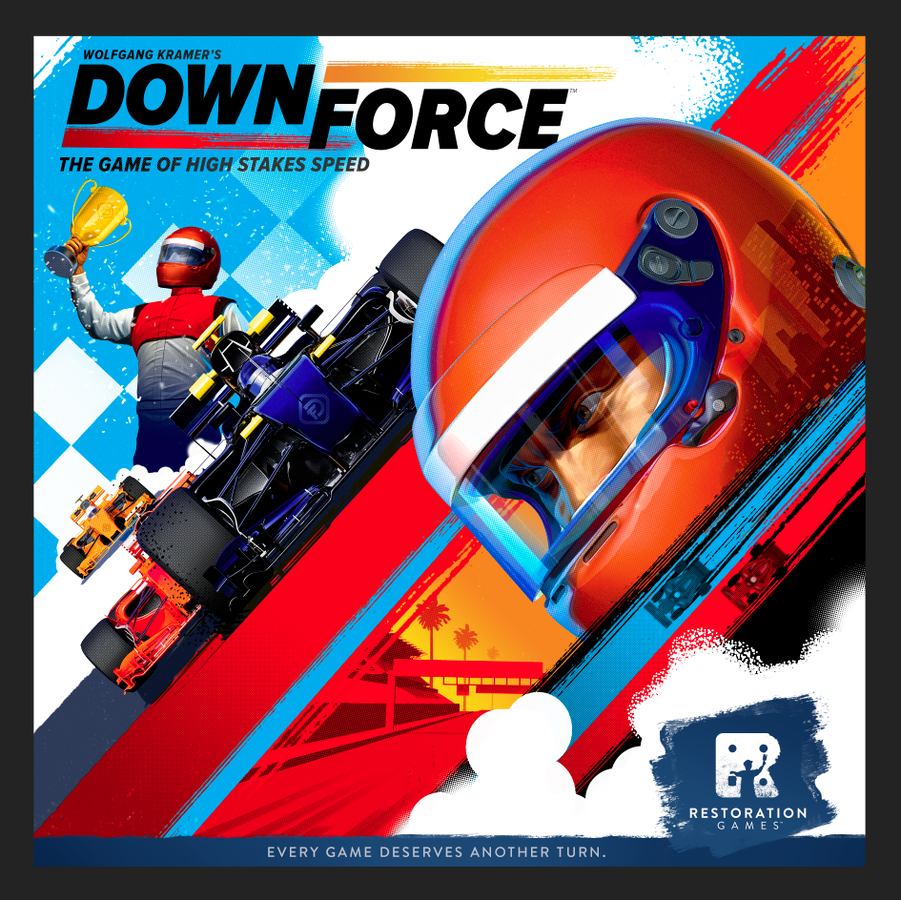 So, Downforce led the way with seven plays, sadly though, all of them were online. Not that the online implementation on www.boardgamearena.com is bad, I just honestly love the look of Downforce on the table, and the kids like it, but my wife hates it — it’s a racing game with an auction, not her cup of tea. The one issue I have with playing online is that everyone goes cheap on auctions, to the point where spending $4m feels like overspending. This is the exact opposite of my groups at the table where bidding can be really aggressive. Funny thing is, scores even out, spending less doesn’t equal scoring more at the end as the average scores have been pretty much exactly the same across the board on the table vs online. I also love that online has all of the maps right out of the gate. I need more racing games in my life, I have Rallyman sitting here staring at me, just waiting to get played, but without an open group to play with, my wife generally nixes them, even Camel Cup. Anyway, my full review is on The OG, if you want to know more of my thoughts, check it out. Now, to just get my hands on one of my last “Grail” games, Daytona 500, or the original Niki Lauda Formel 1.

Majesty For the Realm

In recent weeks, I’ve been watching games move into my 50 plays list, Azul, Carcassonne and Ginkgopolis have all moved into that level of play this year. Santorini is probably next in line, but right after that I have a feeling it’s going to be this wonderfully light, yet tense, tableau builder, Majesty For the Realm. This one is a favorite of my oldest daughter and we can sit and play a best of three series in about twenty minutes with just us. Review here on The OG from Simon can be found here. We didn’t enjoy Splendor as a family, so I went in for Majesty with a bit of trepidation. But lo and behold, we found a quick playing game that gives enough variety that I can still enjoy it after forty some odd plays. Your Realm has two different sides, A & B, each side plays a bit differently, so if you find yourself in a bit of a rut and find that players are playing the same way, switch things up and play the B sides, or mix it up even more and play a mixture of A & B. One funny thing about the game is that while it has wonderful coins that you collect as the game rolls on, it doesn’t have any fives, so you are constantly making change and that simple thing keeps you engaged and doing something at all times, if it wasn’t designed this way on purpose, I’d be shocked. Wonderful game that deserved far more support than it has received. I’d love to see some new Realm cards in the mix. 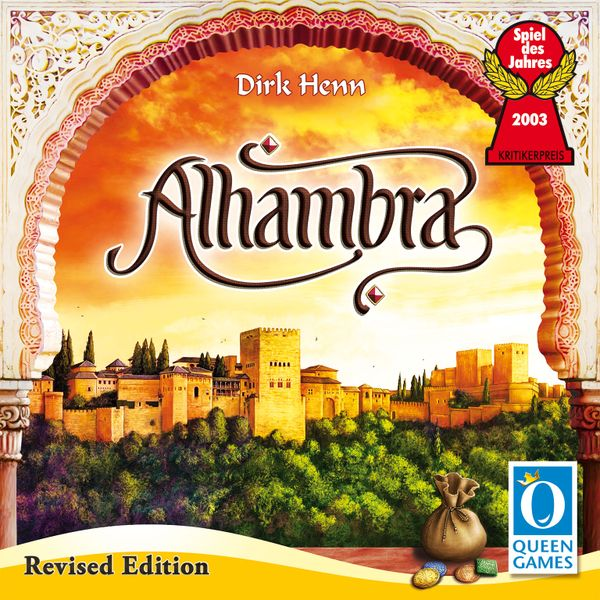 At the spurring of fellow OG’er Chris Wray, we broke out this oldie and, what we are finding out again, sorta goodie. I enjoy tile placement games, and Alhambra is definitely that, with you buying tiles trying to collect majorities and building them in your alhambra trying to also create a high scoring wall. It definitely has its moments, but ultimately, Alhambra, ends up playing like a slow slog at times. So much is dependent on what tiles are out there to buy, and if folks do not want those Arcades or tiles with three walls, they just sit there, folks pass on them in hopes that someone else will bite the bullet and clear out the market for everyone else. I’ve heard rumors that Alhambra is a better game, a more elegant game with expansions or modules, but we don’t have any of those in our old box, so I am skeptical at best. But, truth is, I must not dislike it too much since it is at number 11 on my all time plays list at 29 plays. Chris has the re-review up on The OG.

I don’t know if I said this last month or not, if only there was a way to go back and look, but I am enjoying playing games that we know, games that we enjoy, games that deserve multiple plays before going onto shelves to be forgotten, but I do miss the learning, the discovery of new games. Right now, I am feeling it more than normal as I sit here and realize, we basically missed Gen Con. July and October are peak rule book reading time for me as I prepare for the big conventions, but I didn’t read a single one. Sure there was a Gen Con Online, but I don’t really recall anything being all that exciting that had everyone talking. FFG had their typical In Flight with a bunch of stuff and a tease, but other than FFG, I just didn’t see publishers buy in the way we had hoped they would. Maybe Essen Online will be different, I am hopeful. Stay safe friends.