A couple years ago, if you had talked to anyone who played games with me and asked them my favorite publisher, they would have easily been able to answer. It was Renegade Games. I love the Clank! Universe and the twist it turned on deck-building games, I loved the stand along titles as well, they all fit almost perfectly into that family style gaming that I love. Somewhere along the line, Renegade took a turn, while still churning out fantastic Clank! Material, the other side of the coin began to slip for me with some questionable releases. I still think that Renegade is a fantastic gaming company, they just haven’t been aligning with me as of late. I jumped at the chance to hang out and checkout Renegade’s Fall Digital Convention, as I had high hopes for a couple of their newer games and I had hoped that there may be signs of me falling in love with their games all over again. Over the weekend, the Renegade Games team hosted demo, after demo over on Tabletopia, along with having panels and media presentations. They tried, much like Capstone Games did, to make this feel like an actual convention, you just didn’t have to fight past the guy with the wagon and overstuffed backpacks.

So the big news heading into this digital convention was that Renegade Games and Hasbro games had extended the license that they had to produce the Power Rangers miniatures game. This news showed up nowhere more prevalently than in the Role Playing news.This license extension not only allows Renegade Games the rights to more Power Rangers stuff, but also adds in GI Joe, My Little Pony and Transformers and Renegade is hitting the ground running by creating RPGs for each of those universes, with the Power Rangers first up in the rotation. These RPGs are going to be built on the 5E engine, reason being that basically everyone knows that engine already. Character creation is easy in 5E and character creation is something that Renegade’s RPG team takes seriously. Also, 5E is kind of an all encompassing RPG system, it allows for all styles of play to work. The books are going to come out as a Rules Guide/Campaign setting with some sample adventures, followed up by lots of supplemental support. The Power Rangers RPG is currently being worked on with writers Elisa Teague from Renegade Games leading the way. Bryan Steel and TJ Storm are also working on bringing the Power Rangers RPG to life, shooting for the first half of 2021. One thing that the folks in the panel wanted to make sure that folks know, if you know one of the RPGs, you’ll be able to play the rest.

Along with the news about the IP RPGs on the way, Renegade also has a new Kids on Bikes on the way and more Wardlings possibly being worked on as well. I didn’t hear a whole lot about Overlight in this panel, but it is possible that I missed it, as they were throwing an awful lot of information out during the last few minutes.

Saturday morning I dedicated to demoing two of the games that had garnered the most excitement leading into Renegade’s Fall Digital Convention and first up was the Power Rangers Deck Building Game. 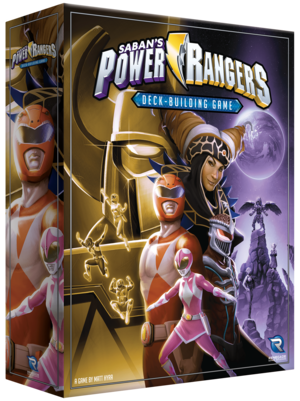 Penned by Matt Hyra, of Cerebus Engine fame over at Cryptozoic, you may have some preconceived ideas about what the new Power Rangers Deck Building Game is going to look like and feel like. Some of those ideas are probably correct, but some are not. PRDBG is a vs deck building game, we played it as two vs two. Forgive me for not knowing my Power Rangers lore, but it was the Rangers versus the bad guys. The game has some interesting twists to go along with the normal buying of cards to put into your hand. As a team you can bank energy and most of your bigger attacks need this energy to be used, so both players will be banking and using energy from the same pool. Your persona can equip items to him based on color of cards, some items may or may not be available for your personal persona. Then use these cards using energy for attacks once per round, should you be able to afford it. The object of the game is of course to get your opponent down to zero health. We didn’t get to finish our game, as is the way with demos there are time limitations but from what we played, I enjoyed the game quite a bit. It’s definitely a step up from anything else that I have played from Matt Hyra as far as complexity, there is a lot going on to keep track of, and a lot going on that you have to do. It will be interesting to see, when I get to play it on the table, how the game translates there. I had some difficulties understanding some of the things I could do and I kind of figure that has a bit to do with learning online. What we should take away though is that I am indeed interested in playing it some more. 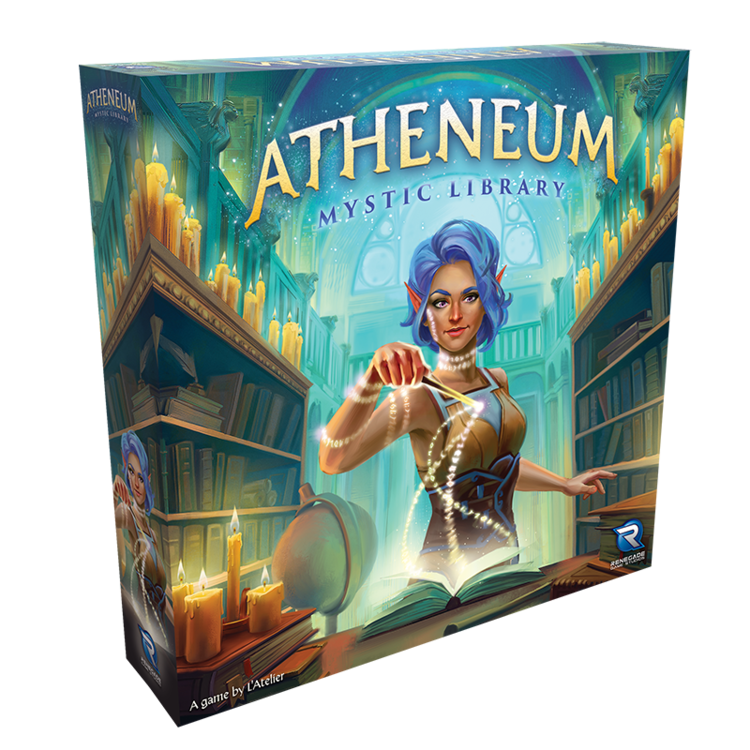 Right after the demo of PRDBG I had another demo, this time for something that at first glance really reminded me of the games that I loved from Renegade that had come out two or three years ago. A lighter weight family game, with some wonderful art, whimsical components and an ease of entry that makes these games easy to play with others. That was Atheneum. In Atheneum we are taking care of a library, trying to put the books in order over night for the next day. Players will be rewarded for completing patterns with the books and at the end of the game for completing shelves, having matching books of their color adjacent to themselves and for candles that have been placed on top of the bookshelves. It’s a bit familiar to a previous Renegade title, at least thematically, but play wise this one plays a lot differently. It’s a drafting game, where each player over the course of a game is going to get to play ten total cards. Choose a card from you hand and pass the hand left in the first round and right in the second round. The card you play in front of you will give you something and each neighbor something, usually books in the first round. You collectall of your books and try to complete patterns that are shown in the offering, this moves after each turn. In order to claim a pattern, you have to have wands to spend, so you have to collect wands as well. The second round focuses more on the maneuvering of books to make patterns rather than gaining so many new ones. It worked really well, even though I did absolutely awful at the game. For all of it’s lightweight feel, this is a pretty good puzzle to try to crack and you have to plan carefully how you are going to crack it. For a fun touch, each book that you shelve in the game has a unique name, it’s just a nice lighthearted touch, it serves no in game purpose. I can’t wait to see the physical components and get to play Atheneum on the table with my family. I think Renegade has another really good original game on their hands.

Final thing of the weekend that I took part in was what they called their Big News Shakedown. It promised to be all the news about Renegade Games outside of those RPGs. First big announcement and the announcement that took up most of the press conference was that all four of the aforementioned licenses were going to be getting deck building games. After playing the PRDBG I could definitely see this one coming. Hopefully they are all unique enough to warrant the development time involved. Other news was that Renegade Games was going to be producing some more puzzles. They recently partnered with EC Comics to create some new puzzles based on their wonderful comic covers from the 1950s. More Power Ranger Heroes of the Grid is incoming, in fact it should be up for pre-order on the Renegade webpage already. Lastly there is a Kids on Brooms based two player card game coming called, Duel of Wands. Players compete in a wand duel in a best of three series, the loser of each round gets to upgrade some cards in their deck before the next round. This one can also be integrated into your Kids on Brooms campaign. That’s it, I had hoped for some more news on some original Renegade titles outside of existing IPs, but nothing was really talked about on that front.

All in all, Renegade Games Fall Con 2020 was an interesting experience, the press meetings were well done and organized, although someone needs to get more reliable broadband up to Montana for Sara. For now, this is going to be how conventions are going to be held and I think that folks keep improving the system each time a new one is held. Much like the Capstone event that I attended, Renegade put together a public Discord channel for folks to build community and get together to play games, with the entire Renegade library up on Tabletopia for folks to use. These style of events are a great way for publishers to get their name to the forefront, without fighting the battle of being seen in the sea of humanity that is a bigger, face to face convention, so even when we get back to some sense of normalcy, I have a feeling these events will keep popping up, and I’ll keep attending as I can.