On August 15th and 16th of 2020, the year of the pandemic, I had the pleasure of attending Camp Capstone, an online convention hosted by Capstone Games. I had attempted to take some time and attend GenCon Online, but there was just too much going on and it didn’t really make all that much sense to me, so I ended up watching a couple Twitch streams and calling it good. When I saw Camp Capstone soon after I figured it would be the same and I wouldn’t end up having that good of a time and just be frustrated with it. Turns out, I was completely incorrect.

So, how does one organize and run an online convention? I don’t know, I didn’t have anything to do with that , but I was on the Discord server set up by the fine folks at Capstone and Chris Whitpan, who hosts Wheel Tapping, a podcast all about 18xx games. Then you put together a schedule that keeps folks tuning into the Youtube channel for designer interviews, development talk and even some surprise reveals. They had set up the Discord server a couple weeks ahead of Camp Capstone, so the folks in there early had already started making it feel like a community with quite a bit of chatter.

The schedule put forward by Capstone featured game plays of their games over on the Youtube channel. Plays of Ride the Rails, Curious Cargo, Renature and New York Zoo. Interviews with designer, Andreas Odenhal of Cooper Island fame, artist Ian O’Toole who has done the wonderful graphic design and art on the Iron Rail series of games, and the head of Capstone Games, Clay Ross. There was even a surprise interview at the end of the weekend, Alexander Pfister after the announcement of his new title, CloudAge.

The heart of the convention though were all the demos that were being run during the entirety of the show. All weekend there were demo runners highlighting all of the Capstone titles trying to build up excitement for the upcoming releases and even a couple that have already been released. This was all coordinated via tickets. Ahead of time you “bought” tickets for a time to take part in a demo, but there was always a waitlist to get in in case folks didn’t show up and often those waitlist participants got into games relatively quickly. The games were all played on Tabletopia and Tabletop Simulator and minus the normal online gaming hiccups, the games were demoed by competent, fun demo runners who also had the joy of being tech support when folks couldn’t get signed in to the server or when they moved their player boards when they became unlocked.

I participated in three games this way. The first being Ride the Rails, which I won’t talk about because I’ve already reviewed it on this very site. My opinion on it has not changed, although I do think that I enjoy the France/Germany map a bit more than the U.S. map. During the weekend we also learned the next Iron Rails title is going to be Iberian Gauge, another Tom Russell design to go with the first release from the series, Irish Gauge.

Some quick thoughts on the other two titles, which I have pre-ordered, so that should give you some idea of how much I enjoyed them. 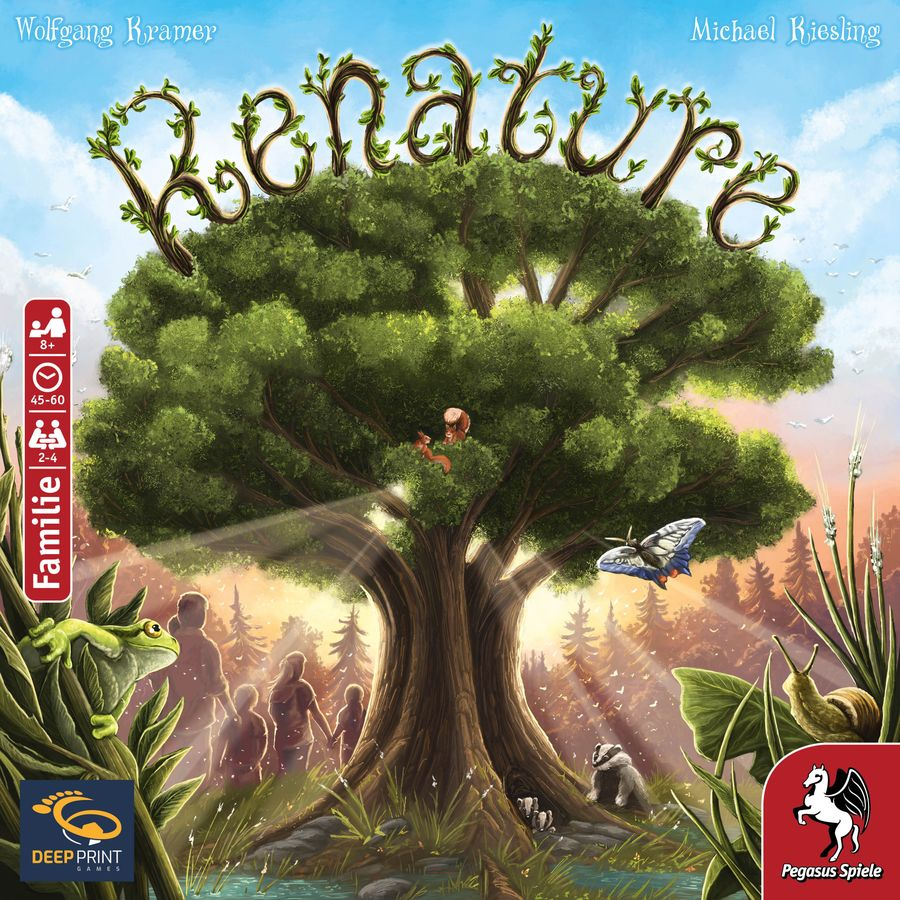 Renature is the new title from famed design duo, Wolfgang Kramer and Michael Kiesling. Initial impression, Renature kind of felt like a love child of Mexica with some Tigris & Euphrates thrown in. Renature is a simple to learn area majority game where you and your competitors are trying to restore nature in an over polluted land. The games central draw will be the wooden dominoes that are played on the board. Each domino has two animals on it and when played to the board they must match one side to another previously placed domino on the board, except at the start, there are four starting areas where you can place any domino you would like. After placing a domino, you may place a plant in an adjacent empty brown area. Plants come in four varieties and range in size with the smallest being worth one point towards the area majority and the largest being four. When a piece of brown land is completely surrounded, or unable to be completely surrounded, that area is scored with the person closing it taking a bonus tile and the players with the most points and the second most from plants in that enclosed area receiving points. Once those plants are on the board, you do not get them back, unless you take some cloud actions, which are bonus actions that you can take to kind of bend and break the rules. What I learned from my one play so far is that you definitely need to use those actions wisely. Game ends when all the domino tiles have been used and the winner is the player with the most points. Minus a few specifics, you could sit down and play Renature with those rules. It’s going to be one of those simple to play, but difficult to play well type of games that I absolutely adore. Plus the table presence is going to be phenomenal with everything, minus the rule book and board being wooden, even the dominos. I’ll definitely have a full review of Renature after my copy arrives and I get to play it with my family. 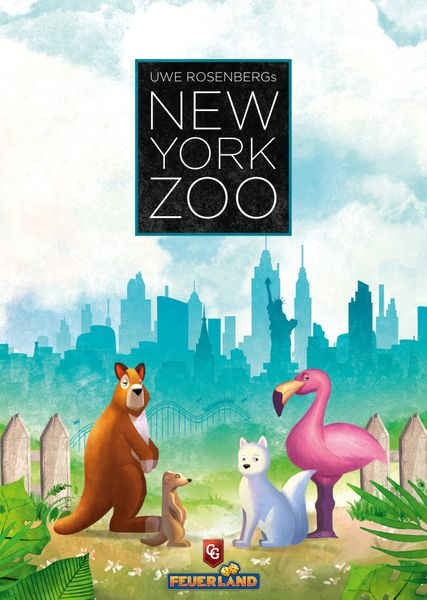 The other title I had the privilege of playing was New York Zoo. New York Zoo is Uwe Rosenberg’s newest polyomino game. This one to me feels like he has taken all of his previous polyomino games and kind of mashed them together and added to it some animal breeding and made the game a race to fill your zoo. The central focal point for New York Zoo is the main action board. On that board will be polyomino tiles to place on your zoos, along with spots for breeding of each of the different animals and spots to gain animals. On a players turn they are going to move a marker a number of spaces of their choice, based on player count (2 or 4 players can move 1 to 4 spaces and 3 or 5 players can move 1 to 3 spaces). Players then take the action of the space they stop on, you can only stop on polyomino spaces or animal spaces, you cannot stop on breeding spaces but they do count towards your movement. After players have taken their action, if they passed a breeding space those animals will breed for each zookeeper who qualifies. Each polyomino can only hold one breed of animal and if you have two or more of that breed you will place a new one on that polyomino until you fill it. When you fill a polyomino you then get to add an attraction to your park, these attractions are ways to fill areas of your park, they range in size from a simple 1×1 to what I believe was a 2×4. New York Zoo is going to be another game that will have a table presence to draw everyone in with the 120ish wooden animals all over everyone’s zoo. It’s also another game that is going to be super easy to teach and learn, but difficult to play well. This one has been pre-ordered as well.

I was a bit saddened that I didn’t get to demo another game that I have pre-ordered from Capstone, Curious Cargo, but I just didn’t have the time. Between events and demos I was still working around the house, doing yard work and even making dinner. Honestly, the only thing that was missing from the event was me carrying entirely too many games into the house when I returned.

I am really glad to see Clay and Capstone continuing to bring over some of these wonderful family style games, as well as the heavier Euro games that they made their name with, along with doing some development work on their own titles. Capstone is building up quite a lineup of games for just about every gamer, they also really know how to throw an online convention.