“Fencing. Fighting. Revenge. Giants. Monsters. Chases. Escapes. True Love. Miracles”.  So, if you’ve seen the movie, you’ll know what I’m talking about.  And I’m assuming that all of these things will be in this board game, just like it was in the movie, just like it was in the book by S. Morgenstern. I’ll leave it up to you to figure out if anyone will ever be “mostly dead” though.

In this “Adventure Book” game, the players will play through six chapters of the Princess Bride story.  Well, they will try to play through the story – because that pesky sick grandson will continually interrupt.  Regardless, the players work together as a team to advance through the story.  Each chapter will can be played independently, but with a suggested time of 15 minutes per chapter, the whole game should take about the same time as the movie itself – which is 98 minutes, as I am sure you know…

Each chapter has a double page layout in the “book” which is placed on the table.  Each story has a bunch of numbered locations on it which are connected by paths.  Specific rules for the chapter are on the left and the challenges for the particular chapter are found on the right.  The challenges are important because each of them must be completed before the team can move onto the next chapter. 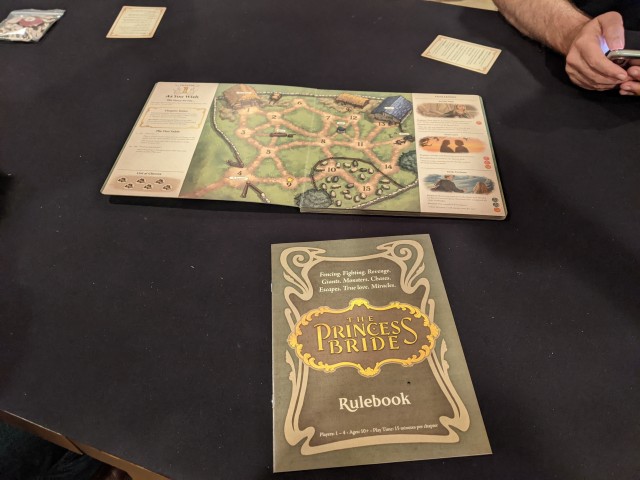 At the start of each chapter, the Story Deck, the Special Deck and the Plot deck are each shuffled separately and placed next to the board.  Furthermore, each chapter in the game has specific setup requirements that will cause you to grab different things from the box; usually different character figurines and what location they start at.  Each player is dealt a hand of 4 Story cards to start.

Play goes clockwise around the table with the active player taking a 5-phase turn before play moves on.

1] Move – move one or two characters up to two spaces between them.

2] Storytelling – plenty of options here, can be done in any order – all but the last choice can be done multiple times: 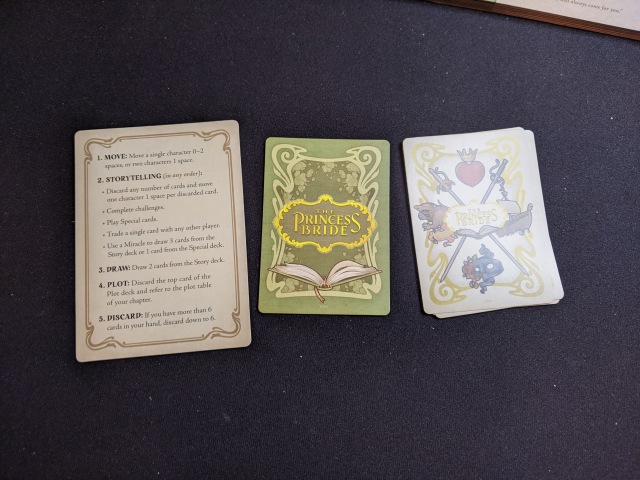 4] Plot – Look at the top card of the Plot deck and then refer to the Plot chart on the left of the board and do whatever it says to do.  Discard the Plot card.

5] Discard – Discard down to six cards in your hand if you had more.  The next player can start their turn 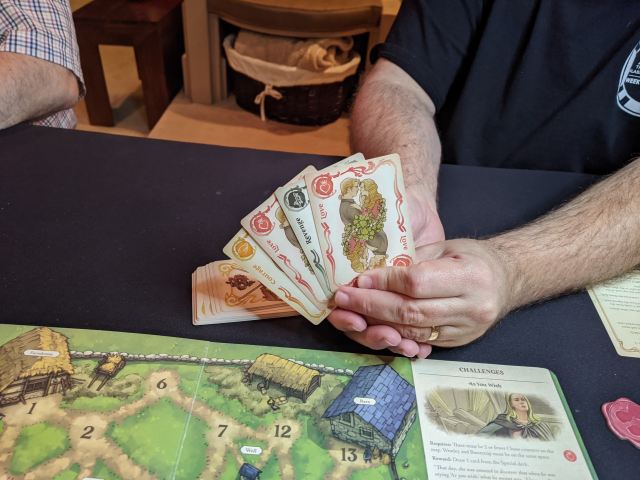 Play continues until the team has completed all the challenges for a particular chapter. When this happens, all players discard their hands and the game progresses to the next page of the book, and the specific setup for the next chapter is done.  However, if the team needs to draw a Plot card and they can’t – the story is interrupted by the Grandson.  The first time this happens, the Replay counter is flipped over.  The second time this happens, the team loses the game.

There are rules for bookmarking the game if you stop in the middle, but who wants to stop this great story in the middle? We have yet to do so, so I really haven’t looked at the save rules in depth. But I know they’re there…

The Princess Bride Adventure Book Game is going to be a great introductory cooperative game.  With the license tie-in, it will be prominently displayed at mass market stores, and I’m sure people will be yelling out “Inconceivable!” when they recognize the cover art.  While veteran gamers will surely know about it and be interested in the game due to the Ravensburger blue corner on the box, I am guessing the majority of people who buy this will be non-gamers who love the movie or are looking for that special Christmas present for a big fan. I think that the game does a pretty good job of trying to deliver something to both groups.

The “board” is a big cardboard book – think of the sort of books that 3-year-old read, but larger!  On each of the six double page spreads, you see one of the scenes from the movie.  The game is definitely true to the movie script, and this is both a strength and a weakness.  For casual gamers, having the game exactly follow the plot of the movie is really good.  Even if the skill at playing the game isn’t great, the group should always know where the story wants to go… and, of course, the rules make it pretty clear where each scenario is supposed to go.  The downside of this story rigidity is that it leads to game rigidity – there is not a lot of exploration of game space in the game.  Once you’ve played the scenes, the game arc isn’t going to change on the next play through… Everyone starts in the same place, the goals remain the same, and the end conditions remain the same. 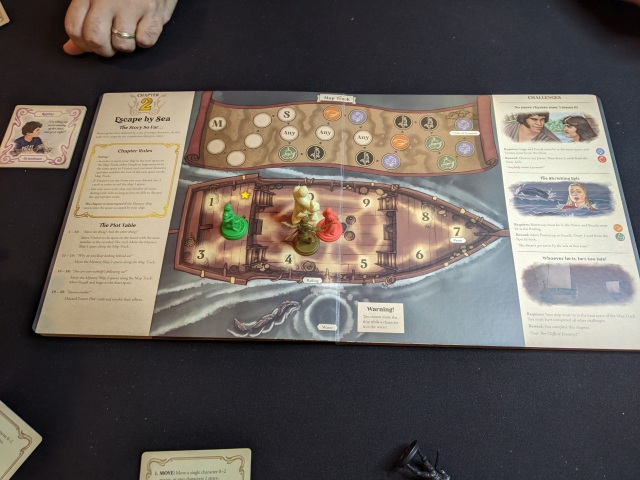 The game does play as quickly as advertised, with some scenarios taking as much time to set up and read the rules as playing through the prescribed path.  We played with 4 players, and we had a very easy time through the game.  I think that this is likely due to fact that we had four hands of cards to trade amongst; and this made it pretty easy to find the card that you wanted on any given turn.  Yes, I know that you’re limited to only one trade per turn, but in a 4p game, you have 12 cards to choose from in your teammates’ hands while in a 2p game, you would only have 4 other cards to choose from.    There is no other rule (at least that we could find) that scales for player count.  I have since tried the first two scenarios as a 2p game and it was definitely more challenging gamewise at that count.  There is also no way to modify the difficulty level of the game.

But, all that aside, let me not gloss over the fact that the game is fun.  Despite some of the shortcomings for veteran gamers, we had the movie soundtrack playing in the background and we were all having fun, trading cards, reciting quotes from the movie, etc.  Our four player game took about 75 minutes from start to finish, and we easily finished each of the six scenarios on the first try.

The Princess Bride Adventure Book Game will be a great way to introduce the idea of the cooperative game to non-gamers.  Earlier this year, I had tried to do this with Pandemic, and man, that game is just too hard for newbies.  I have had better success with Pandemic Hot Zone North America.  In both cases, due to the obvious tie-in with 2020, the theme was what attracted people to trying it.   I think I would have similar success with the theme here, as many of my friends are in the right age cohort to know and love this movie  – and so they will surely be interested in trying out the game because of it.   I suspect that this game will be a hit over the holiday season as it is prime material for gift giving occasions.

For my real gaming group, this was an enjoyable experience, but one that was probably too easy and too linear for repeat plays.  I have found that the game could be tighter with only 2 players, but my regular group has more than that, so this player count doesn’t come up as often.  That being said, the familiar story from the movie may even override those concerns because just about anything related with The Princess Bride brings a smile to my face.