Dale Yu: Review of Umbra Via

In Umbra Via, players compete to control and complete the most cunning paths in a hidden garden.  Each player has their own planning area hidden behind a screen, they also get a bag matching their player colors to keep their flowers in.  Each player placed their soul tile near the board and then places 11 of their soul flowers (in their color) on their tile.  The first person to empty their Soul Tile and then collect it will win the game.

The main board, showing a 4×4 grid is placed in the center of the table.  Paths will be created on the board as tiles are laid upon it.  A path is considered open if there is still a possibility for it to be extended legally.  A path is closed off when other tiles or the edge of the board prevent any further expansion. The Altar board is placed nearby with its four areas marked I, II, III, IV.   There is a small tiebreaker area at the right edge of this board; each player puts one of their energy flowers in this area and they are randomized to set the starting Tiebreaker order.  The Path tiles are shuffled and placed in a facedown stack next to the Altar board.

The game is played over a number of rounds, each with three phases: Setup, Bidding, and Placement.  In setup, reveal 4 Path tiles and place them on the four spaces of the Altar board.  Do not rotate the tiles from whatever orientation they are randomly revealed in. 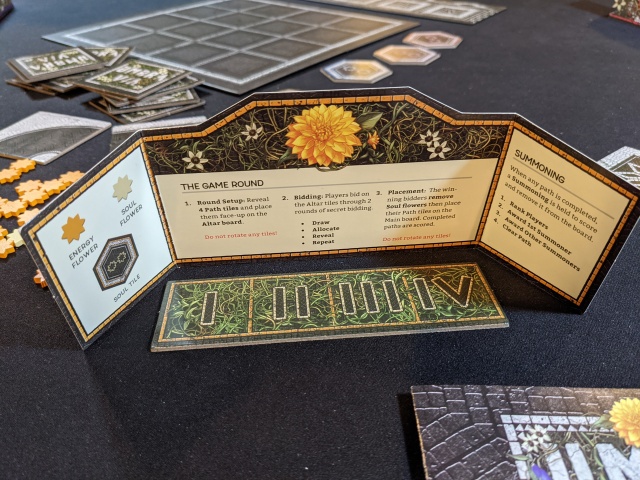 The Bidding phase is a little complicated.  There are two rounds of blind bidding, each following the same pattern.  Each player has a planning board behind their screen with four spaces matching those seen on the Altar board.  In each round, players draw 3 flowers from their bag and then allocate them to the four possible bidding spaces.  Energy flowers (the brighter ones) are worth 1, and the Soul Flowers (more pastel in color) are worth 2.  All of the drawn flowers must be bid.  Once the first round of bidding is secretly done, the bids are revealed, and the bids are moved onto the corresponding spaces of the Altar board.  The whole process is repeated exactly in the second round. 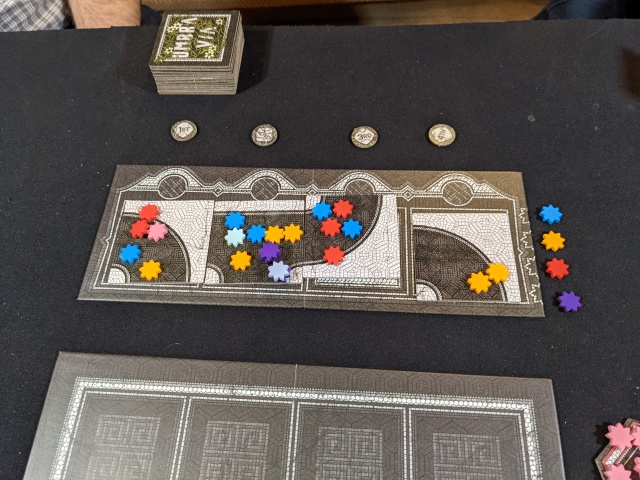 Then in the Placement phase, the tiles are placed on the board.  First, any tiles which have no bids are simply discarded.  Then, the order of placement is determined, with the tiles having the fewest flowers on them being placed earlier (there are a set of markers to help you remember the order).  If there is a tie for number of flowers, the tile on the left (lower roman numeral) will be placed earlier.   Now, in placement order, see who is the “winner” of the tile; that is, the player with the highest value bid on that tile.  If there is a tie, it is won by the player whose marker is highest on the tiebreaker track.  That player then moves their marker to the very bottom of the track.  Any soul flowers on the tiles are removed and then tile and all remaining Energy tokens on it are placed on the board by the winner.  The tile must remain in the same orientation that it was in on the Altar board.  If there are tiles on the board, the new tile must be placed orthogonally adjacent to a previously placed tile; if no tiles are on the board, it is placed in one of the four central squares.  It is not required to match the paths of neighboring tiles.  Once the tile is placed, check to see if there are any closed paths on the board as a result of the tile placement (Again, this means that there is no further possibility for expansion of that path).

When a path is completed, there is a Summoning to score the path and remove it from the board.  The player(s) who have the most flowers on the path now get to take 1 Soul Flower per tile in the path from their Soul tile on the table and then move them to their bag.  The player(s) with the next most flowers now get half of the Soul Flowers (rounded down) into their bag, and so on.  The tiles that formed the path are removed from the board and placed in the discard pile. All of the Energy flowers on the path are returned to their respective owner’s bags. 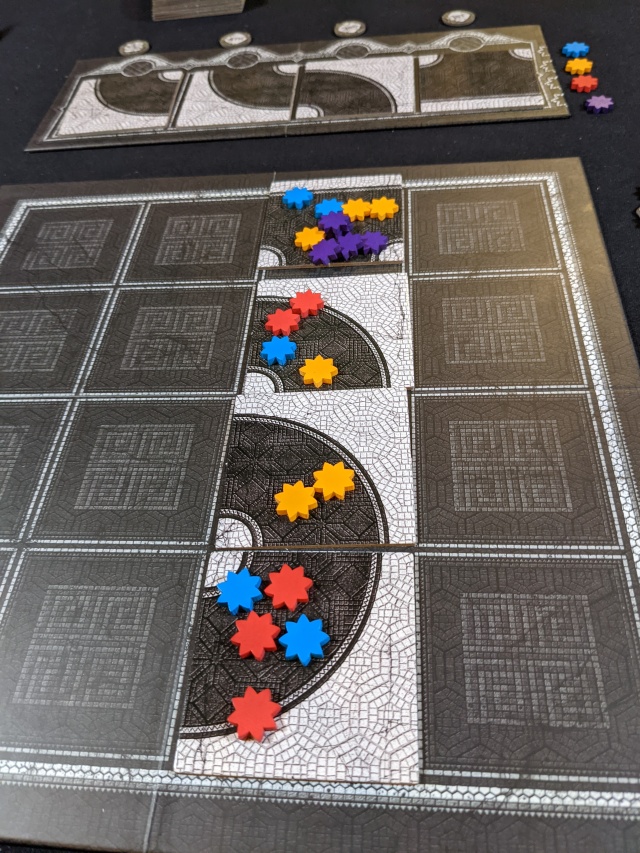 If multiple paths are closed from the same tile play, they are resolved in the order of the placing player; and all closed paths will be scored, even if the removal of a previously scored path “reopens” the other path.

This continues until all of the tiles in round have been placed and all possible closed paths have been scored.  Then a new round begins going through the same three phases.

The game ends immediately when someone collects their Soul Tile.  This tile is worth 2 Soul Flowers, and can only be collected if you are ranked first on the path just completed.  Note that the path must be at least two tiles long or else you would not be able to collect it.  If two players simultaneously collect their Soul Tiles, the game ends in a tie between those players.

There are also three special tiles which can be shuffled into the deck, but they are not recommended for beginners.  Each of these tiles has a special rule-breaking action associated with it, and these tiles can add to the strategy of the game as players have extra things to consider in their bidding.

Umbra Via gives players an interesting combination of game mechanisms to deal with… The blind bidding bit is often not my thing, but the two-staged bidding here is actually quite interesting. Sure each of the two bidding rounds is blind – but the overall process is not blind.  In fact, there is plenty of room for bluffing and maneuvering with the first bid, and the whole process is somewhat uncertain due to the random draw of flowers from your bag.  More than once, my plans have been thwarted by drawing two or three soul flowers – which will help me win a bid but do not help me place flowers on the board!

The other interesting thing about the bidding is the way in which the strength of the bids affects the playing order of the tiles. There are times you want a specific tile, and there are times that you want to play first to take advantage of a specific board setup – and it’s really hard to get both to happen.  There is a clever back and forth pressure where you try to bid enough on a tile to win it while not bidding so much as to lose your tile placing priority!

Thus far, I am still on the fence whether it’s better to try to win short one-tile segments on the board or try to get a much larger payoff in a longer tile stretch (where you can even get a pretty good return on investment for coming in second place).  I have seen both strategies work fairly well.  In addition, the way the game is set up, there is a little bit of a catch-up mechanism in the addition of soul flowers to your bag as you go.  While it seems like having more soul flowers would be good to have as they are worth double in the bidding – they inhibit you from placing markers down in the area-control part of the game, and as a result, the other players tend to catch up.

Thus far, in every game that I’ve played, the end-game state ended in a situation where all or nearly all of the players were working on the final tile at the same time.  In one way, it’s great for a game where everyone is vying for the victory, but if it always ends up like this, then we should maybe just make that game for that single tile?  Of course, I still have a fairly low number of plays, and it may just be that my local groups play a super competitive Umbra Via game – but this is something that I’ll be watching out for with repeated plays.  The challenge at the end of the game is figuring out how to win a path of at least two tiles; we had a number of occasions where players would specifically block off tiles to close them prematurely so that another player would not be able to win the game.  And, then, of course, the next person would work to close off that newly made path to prevent THAT player from winning, and so on…

The artwork in the game is functional, but the contrast of the bright flowers on the mostly black/white toned tiles really is striking.  For some reason, I have some issues with figuring out which pastel soul flowers go with blue and violet – they just seem to be close together when I look at them, but I was the only one in the group with that issue.   And for the record, I did go here to do a screening – and I do not appear to have any issues with blue colorblindness https://www.colorlitelens.com/color-blind-test.html

Umbra Via provides a challenging game where you have to be good/lucky at both the bidding and area control aspects of the game.  Our games have been pretty close thus far, in part due to the catch-up mechanism built into the game.  It’s easy to learn, and it offers a lot of action in the 30-45 minute time frame.  A very good super filler, and one that I suspect we’ll play through the summer.