The EXIT series was one of the original puzzle-game franchises to hit the market when the escape room game craze took off a few years ago. To date, my family and I have been able to play all of the ones released here in the US, and this is a series that we continue to look forward to future installments. While there are many worthy competitors in the genre, the EXIT series is possibly the best known of the bunch – due in part to the initial set of games being awarded the 2017 Kennerspiel des Jahres award.

I received this EXIT adventure right around the start of June 2021, and it hit the table nearly immediately as my group was keen to play another one of these.  It had been awhile since our last experience with this franchise.   We did have to wait a week to make sure that everyone in our regular group was available because these escape room games (like all their other EXIT predecessors) can only be played once. Once you know the puzzle solutions, you really can’t play the game again. Additionally, the game may require you to destroy or deface some of the components, and that also makes it hard for someone else to play with a copy which has already been used.

In this game, crooked treasure hunters have broken into the office of your university’s archaeology department!  Your professor has disappeared without a trace – and so has a book with old records about a hidden temple.  You must act quickly and chase down the criminals.  Your pursuit will take you deep into a mysterious jungle on a small island.  You must find the professor in time and save the revered treasures of the temple before they fall into the hand of the devious robbers!

I will try to give my thoughts on this game, but beware – much of what I saw will be couched in generalities. As with all the other escape room game reviews, I will not spoil any of the secrets. Any details come from the box or the rules themselves.  Unlike almost all the earlier EXIT games (except The Catacombs of Horror), this game comes in medium format box, and all the puzzle material is contained within the box.

However, the rules specify that you will need some extra material – it recommends having paper, pens, and scissors handy. Unlike some of the other entries in the escape room game genre, this one is definitely more of a “legacy” style as the intent is that you will need to alter the components in some way in the process of solving the puzzles.

The format of the game VERY DIFFERENT from the previous EXIT games. In this one, the components are dominated by four bags of jigsaw puzzle pieces!  Because of this, the larger box is required.  However, you do not get any cards in this adventure – which is the usual format for the series.  Instead, you get a super thick book – this has the instructions in the front, and then written clues in the back. There are also a set of a dozen riddle brochures, each with a three symbol code on the front.  Also, interestingly, you must construct the solution wheel yourself – this usually comes preassembled.  The wheel itself is also a little different, there is a window in each of the wheels where a symbol can be seen, and then when you flip the wheel over, there is a small hole on the back with usually shows a red “X”. 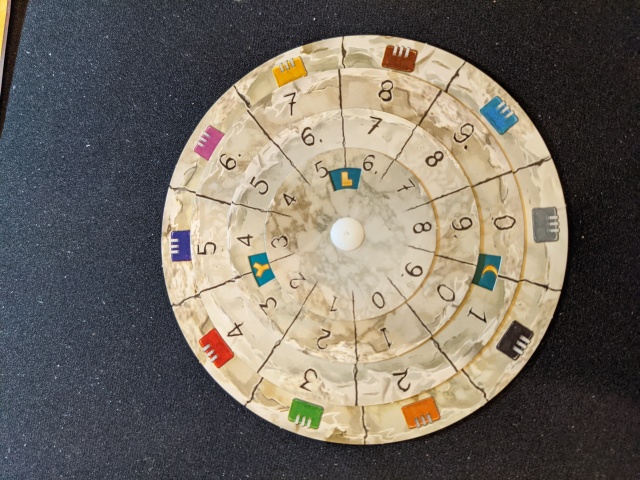 So, when you start this game, you have only the solution wheel, a single bag of puzzle pieces and a piece of parchment paper.  The first thing you’re going to have to do is assemble the jigsaw puzzle!

As usual, puzzles will be denoted by a black outline of a shape (such as a circle, a crescent moon or a cross). All of the puzzles have a three part solution – which might be letters, numbers, colors or shapes. It all depends what is on the solution wheel in the particular game. When you think that you have the right answer, you use the solution wheel to dial in the answer. The outermost ring has the ten puzzle shapes. You line up your three-part answer in a column under the appropriate shape, you then flip it over to see if you have a matching color lock on the back window as the puzzle you are currently solving.  If there is a match, you MAY have solved the puzzle correctly. Now, flip back to the front and look at the three gold colored symbols in the windows on the front – if you find a brown brochure with matching icons, you have solved the puzzle and you now open up that brown brochure.

The group wins the game when they get through all of the puzzles/brochures. If, at any point, you feel like you’re stuck, you can flip over the booklet and find the color coded page with the hints.  Be careful as multiple hints are printed on each page in the booklet!  Also, when reading the rules – don’t turn the page or you’ll give yourself a direct view of the final solution!?!

It has been a long time since I’ve had an issue with the components of an EXIT game, but I really dislike this booklet.  It’s not easy to prevent reading clues you don’t want to read, and seriously, the book needed on page to safely cover the final puzzle solution!

Once you have finished the game, you can give your performance a rating using a chart provided in the rules. Essentially, the best rating is for finishing the game in under a 2 hours and having used zero hint cards. Your rating decreases with more time spent and more clue cards used. There is a certificate on the last page of the rules which can be filled in if you want to keep track of your successes (or failures).  We made it through this game in about 98 minutes, and we did not require any clues.

The quality of the games remains high. Of all of the escape room/puzzle hunt games available, I still feel that the Kosmos EXIT games are my favorite. This latest series of games continues to confirm my belief that the Brands are at the top of the heap as far as this genre goes.  This one shows a bit of extra ingenuity as the format is so different from most of the predecessors in the series.

The puzzles are well constructed, and most of them are “fair” in the sense that you are given all the information that you need to solve them. Sure, there is a bit of lateral thinking involved in solving some of the puzzles, but there is generally enough clues given to you in the game material to at least allow you to make the mental leap (if you’re able to piece together the information correctly). We found this one to be pretty standard in difficulty, and we did not require any of the clues.  There is nothing tricky about the jigsaw puzzles- you just have to be able to put them together :)  The finish on them is a bit glossy, and this does make it a bit difficult to examine the illustrations on them until you figure out the correct lighting.

I thought that there were a number of puzzles in the previous games which were very inventive and innovative, and I’m happy to say that the quality in this set remains high without repeating puzzle types. There were one or two puzzles which had us stuck for a bit, but with a bit of discussion and pondering – we managed to make the breakthrough that we needed.  (Actually, it helped that we had done some of the games by Ravensburger which also employ jigsaw puzzles)  The variety of puzzle styles is also quite nice – ranging from visual to straight logic to everything else in between.  I also liked the jigsaw part of this game, it was a bit different than the usual mechanic, and it was a nice change.

The EXIT games all have a difficulty rating on the front of the box, and this one is a 3 out of 5, the lowest difficulty rating found on the EXIT games (there has yet to be a 1 out of 5). The increased length of time for the game here is mostly due to the time it takes to construct the jigsaw puzzles.  You will end up putting four of them together over the course of this adventure.   This jigsaw puzzles were the right size for two to three puzzlers, but it might get tight if you have more. 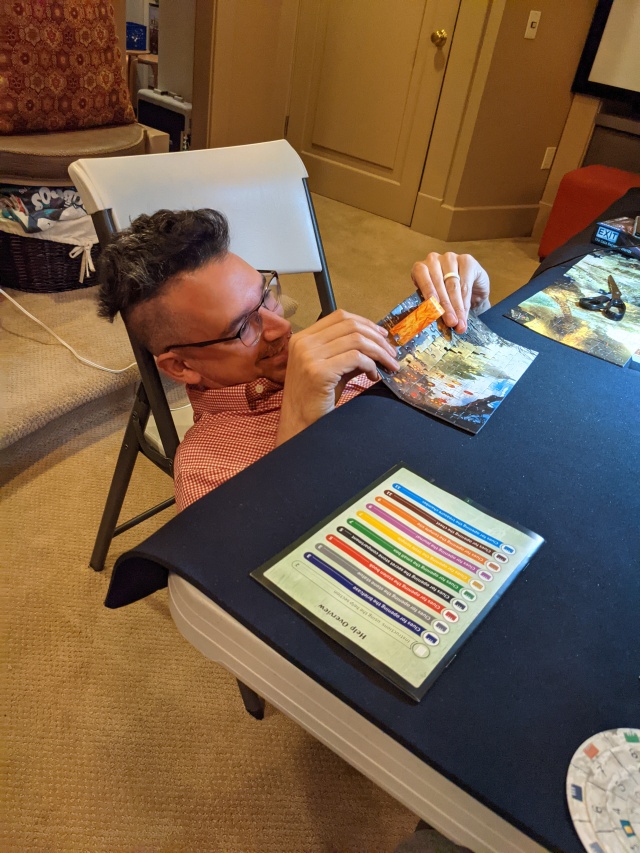 In the usual format, I like the way in which the answer cards are setup to prevent you from accidentally getting the answers. The booklet used in this version was not as good. As mentioned above, the booklet has multiple clues on a single page, and thoug h we didn’t need them in the course of play, after looking through the booklet, it was hard to not read extra things.

Unlike many of the games in the genre, these games are meant to be used only once. As the rules clearly tell you, you might need to alter the components (drawing, cutting, pasting, eating, etc.), and once you do that, it may be impossible to play that particular set again. I don’t have a problem with this at all. First, and foremost, allowing (or demanding) that you change the components opens up all sorts of possibilities with puzzle creation, and I think that the Brands have done an excellent job at this. The cost of this one is a bit higher due to the larger box and the extra jigsaw components.  But the current prices seem fair for an escape room game combined with four small jigsaw pulled.

An affiliate link: https://amzn.to/3wqqTBe  Check back often as they do occasionally go on sale!

Now that there are over seventeen EXIT games available – I think many of you will already know if you want to do these or not. If you haven’t played them yet, they can be found online fairly easily, and they are perfect for a little activity when you’re stuck at home. The amount of puzzling goodness is very high given the size constraints of the box, and I think that the overall experience of this series is the best of any of the escape room games I’ve played thus far.

Overall, my rating for the entire series is an enthusiastic I love it!

1 Response to Dale Yu: Review of The Sacred Temple