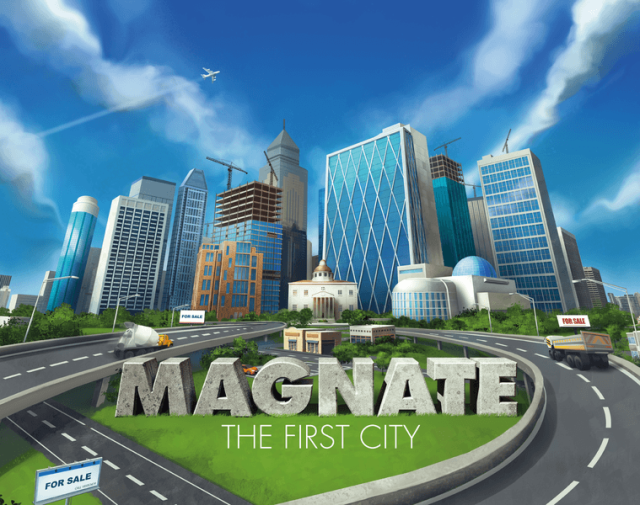 In Magnate, players run property companies and they strive to develop the city of Humbleburg where they are all based. As the story goes, the city council decided to cancel all zoning laws and every property company is trying their hardest to make as much money as they can before the property bubble bursts. 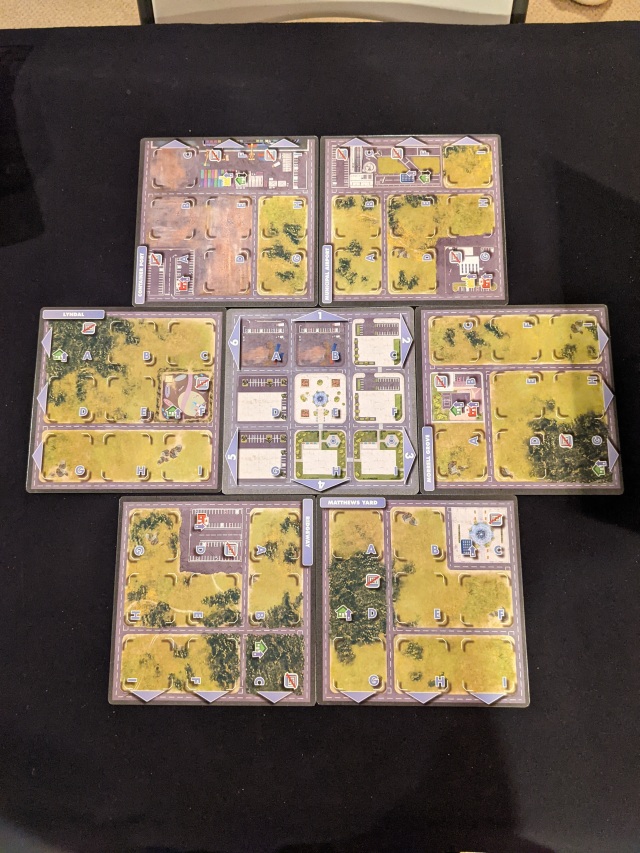 The property market board for the appropriate number of players is pulled out of the box, and the Crash marker and the land price marker are placed on their appropriate spots. The new tenant cards are shuffled to form a deck and the risk cards are also shuffled to form their own deck. Each player gets all of the markers of one particular company as well as a matching money wallet. Inside this wallet is their initial treasury of 2 million dollars. It is to be kept in the wallet so that it is secret from all players.

The game will be played over a number of rounds until the property Market crashes at which point the game ends. Each of the rounds have the same five phases, always played in the same order. 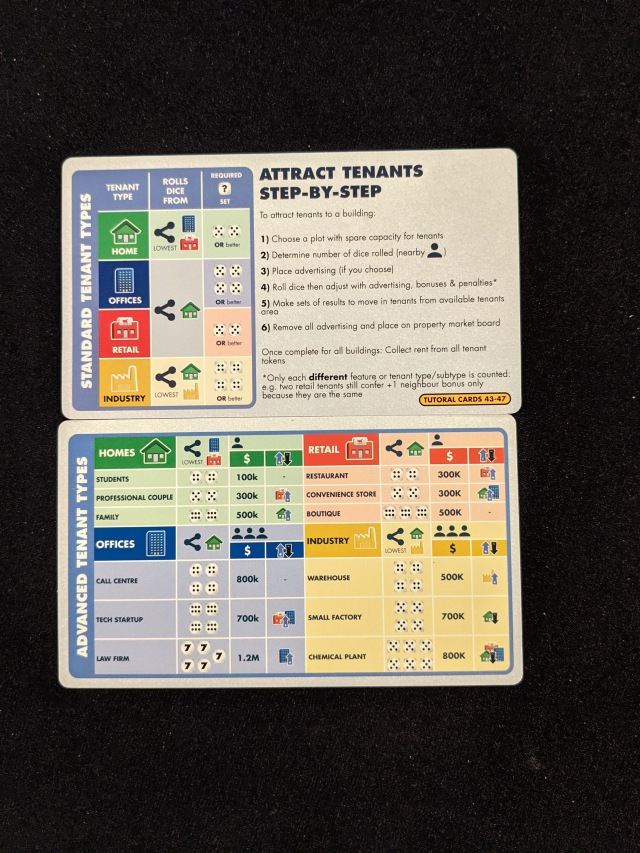 In this phase, players take turns to first try to attract tenants to their buildings which are not yet filled. Then they collect rent from said tenants. Though this is a gross simplification, in this phase, the active player will choose any of their properties which are not yet filled and roll dice to try to generate combinations which allow them to add new tenants to that property. The number of dice rolled is variable, mostly dependent on board conditions. These dice, when rolled, can then be altered by modifiers on the board (on nearby plots of land in the same neighborhood tile). Players can also use advertising markers to actively change dice to more favorable results. Once the rolled dice are modified, check the chart in the rulebook to see how many tenants you are able to add to this space (It differs based on the type of tenant you are trying to acquire). This process is then repeated for every unfilled property for that player. It is possible to skip rolling for any particular property if so desired. Once all of the buildings have been rolled for, the player can then collect rent. Simply look at the upper left corner of each tenant token on the board to see how much rent they pay. Total these numbers, take the money from the bank, and place this money in your secret money wallet. 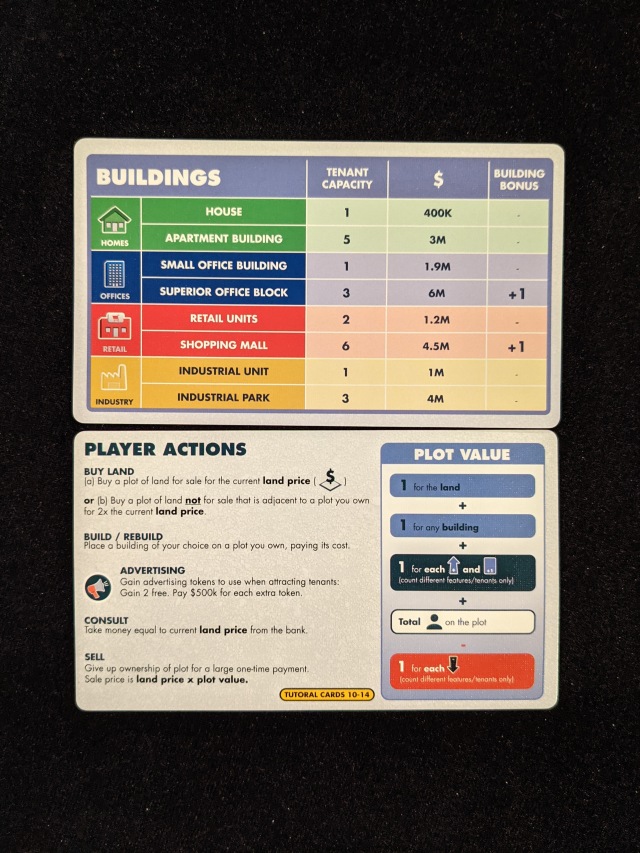 In this phase, the first player starts by taking an action. Then each player clockwise has a turn to take a single action of their own. This is repeated twice more until each player has had a chance to take three actions this turn. There is a player Aid card which hopefully summarizes your options. There are five different possible actions, and each can be repeated as often as you like. 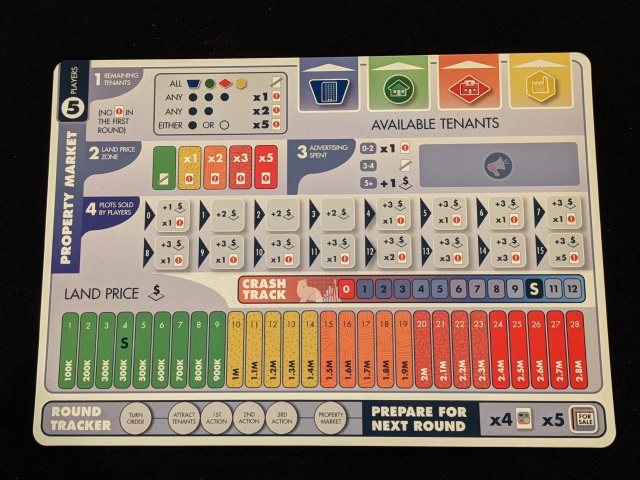 This phase has four distinct steps, all done on the Property Market board. To remind you of where to look, the property Market board is helpfully numbered for each phase.   Many of these phases caused you to draw risk cards. Any time you draw a risk card, look at the top section labeled “Crash Track”, and move the crash marker down a number of spaces to match what is seen on the card. If the crash marker reaches the left most space of the track, the crash will happen. Note that you still draw any further risk cards this round, you simply do not need to move the marker any further once it is all the way to the left.

Phase 5 – Prepare for the next round

If the market crashes, you first need to determine how big the crash will be. Take all of the risk cards drawn during the game and add up all the numbers on the bottom part of each card. Then moved the land price marker down this number of spaces. Now sell any remaining plots on the board using the new post-crash price. Players compare how much money they have in their wallets, and the player with the most money is the winner. There is no tiebreaker. 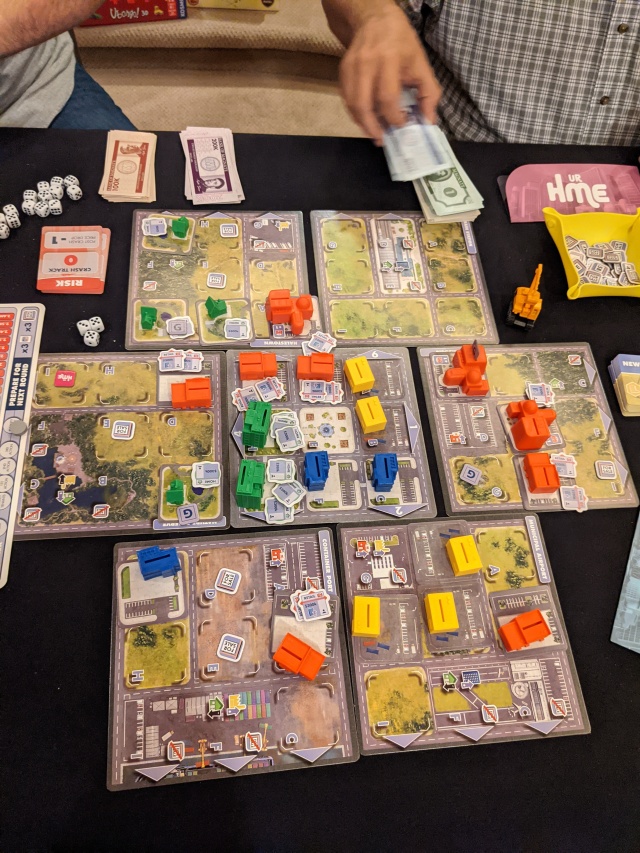 Well, when Magnate showed up in the Gaming Basement, I was blown away by how big the box was!  And then I remembered that this was born on Kickstarter, and once the lid is opened, you can quickly see that the box is filled with custom made vactrays and filled with dozens of molded plastic buildings and whatnot.  For the crowd that is interested in this level of componentry, it definitely fits in with other well produced games of recent years.

The game itself seems complex as you read the rulebook for the first time, but honestly, once you get into the swing of the game, it really flows pretty nicely, and the overall arc of the game is nicely done.  If you want, you could try playing the introductory game – there is a huge deck of cards which is only to be used for the very first game, and it really is more of a walkthrough – you don’t have to read the rules, you can simply open the deck, start on the first card, and then read and do what each card says.  By the time you get to the end of the deck, you’ve played your first game and you’ve theoretically learned all the rules along the way.  I looked at this deck, and I think it’s a decent idea, but our group voted against a likely 2.5 hour walkthrough game where the cards tell you want to do for the first turns and read the rules on our own and played the first game with regular setup.  But… if you were not comfortable reading a fairly detailed rulebook, this might be a really great way to jump in without having to do any homework prior to playing for the first time.

As you might expect from the rules review above, the crux of the game is figuring out when the real estate bubble is going to burst so that you can maximize your profits from the sales of your buildings (because, trust me, you’re gonna get about nothing from the post bubble prices).  The big money is made from selling off buildings right at the end when land prices are high – though getting some steady rent income is a great way to make sure that you have enough funds to continue buying up buildings and attracting tenants.  The timing of  the crash is dependent on the a lot of things, and it’s important to look at the main scoring board to see how many risk cards will likely be drawn each turn.  There is some variability on the amount of movement of the crash marker per risk card, but I would say the average is at least one space per card drawn…  Our games have been around 4 to 6 turns so far, so you don’t have a lot of time to build your buildings and then sell them off!

Early on, you just want to try to grab land and hopefully afford buildings to go on them.  You can try to choose your locations to take advantage of the enticements for certain tenants as well. While you can make a decent profit by plunking a building down on a plot and then selling it later when the land price increases – you really maximize the profit when you can also add in modifiers for tenants and their enticements, etc. 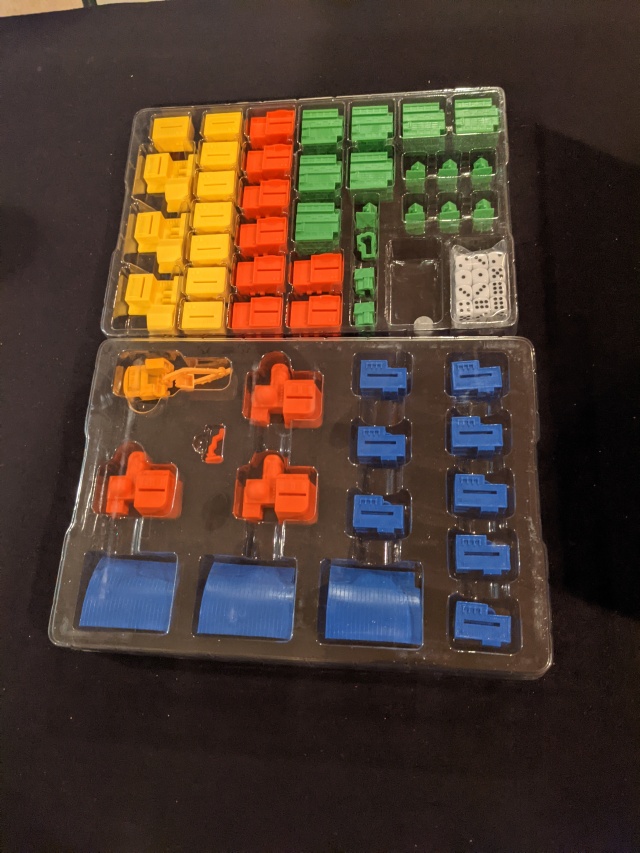 It definitely helps to have player aids.. Trying to figure out all of the modifiers on the selling price for land plots can be difficult / nearly impossible for those who are not mathematically inclined.  The chart on the back of the rules also makes it so you don’t have to pull out your phone calculator all the time.  Also trying to figure out how to modify the dice roll for tenants can be difficult, and it’s super helpful to have this all summarized in one card.  (If you are like us, and you choose not to use the starter game deck, be sure to wade thru this deck to pull out the two player aid cards per player that are found in the midst of that tutorial game!)

The one thing that I didn’t like about the game was the auction for turn order.  As it stands, the winner of the auction pays their money and then play goes clockwise from there.  There seem to be a number of occasions each game where the player who was willing to spend money but just not quite enough ended up last in turn order, and the guy who passed the whole time because he didn’t have any money ended up second just due to the clockwise play order.   It seems like it would be better if the auction determined the full order not just the first player – but, I maybe haven’t played it enough yet to know this for sure.

As I mentioned above, the quality of the component and overall production is really great, especially for a first time designer/company.  The game definitely has a good table presence with the big buildings, and it really does feel like you’re building a city as you see all the land plots go down and the buildings rise up around the city center.  The land plots could maybe have been a bit larger as there isn’t quite enough space to plunk a building down and then tenant chits and then still be able to see everything, but this is a minor quibble. 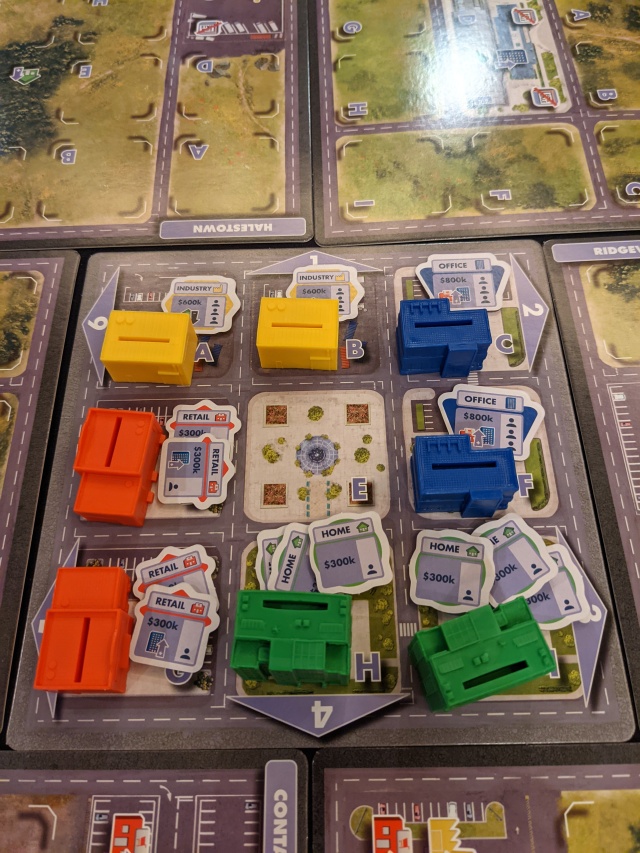 Magnate gives you a nice real estate speculation game with some interesting ways to profit from your work.  It’s a bit fiddlier than a typical Euro game, but the player aid cards help make it easy enough to digest.  The end can come surprisingly quick, and the penalties for missing the transition are huge – so much so that it’s pretty much impossible to win if you aren’t able to take advantage of the timing of the crash – but there are plenty of games that have a steep cliff as the endgame unfolds.  At least in this game, if you miss the crash, you don’t have long to suffer and the final scoring happens right after!  For those gamers who like city construction games as well as financial games, this may be a good fit for you!