Fujiyama is a delightful tile placement game, themed around building the most beautiful mountain through the 4 seasons and attracting wildlife over 9 turns.

Fujiyama is a tile placement game. Each player has their own player board and the boards have asymmetrical starting seasons and animal order.

The players each take 11 tiles and have 3 animals of each type. Each tile has 3 season pictures and 3 mountain spaces.  Season spaces are connected to make complete triangles of one season type to score. Mountain spaces hold animals.

To start the game each player draws three tiles. One to keep as a “trump” tile which they can use once during the game. In a multiplayer game the player will give the player on the right and left one of the remaining tiles. These tiles are placed on the other player’s board. Then the player will choose which of the received tiles to use on their turn.  This was a bit tricky getting used to giving all the tiles away and not being able to keep one to play!  When placing tiles players try to complete season triangles of the same season (color). triangles will score at the end of the game. Each season scores a bit differently for the icons. For example the spring season or pink scores for the number of blossoms present.

So players may think, why don’t I just give my neighboring tile the worst possible in regards to scoring? Well, here is where it gets a bit tricky again. If another player chooses to play the tile that you gave them, they must give you the animal on their board for that round. There are 3 animals: rabbits, squirrels and foxes. When you place a tile you may also place any animals that you have received that round onto one the gray flatland spaces of that tile (one animal per space). Flatland triangles score for differing animals at the end of the game. This makes a delicate balance of passing opponents a good tile, but not too good with the hopes of receiving an animal.

The game ends after 9 rounds. Then each season triangle is scored if the seasons do not match in the triangle it scores zero. Each flatland with animals is scored. The player with the most points wins.

Fujiyama is a fun tactical game where you must make the most of the tiles given. I like the challenge of giving your opponent a tile good enough that they will pick, thus offering you an animal but also not allowing them to score too much with it. It would make a great meaty filler.

Ajisai is a game based on the beauty of Hydrangea flowers. Hydrangeas originated in East Asia but are ubiquitous to gardens these days. Commonly known for their striking blue or pink colors depending on the pH of the soil they actually provide a wonderful transformation of colors throughout the season from spring through summer to the rainy season. As the flowers change color a feeling of movement is instilled and the designer tried to capture that in this game. These are flowers from the same hydrangea in my garden.

At first glance Ajisai may remind you of Othello but it’s much more with interesting changes.

The game is for 2-3 players. The board is cloth with a beautiful border. The flowers are nice wooden tokens. Each player has 2 or 3 colors depending on the number of players. There is also a neutral color flower, white. On a turn the player must perform “blooming” or play one of their flowers onto the board. 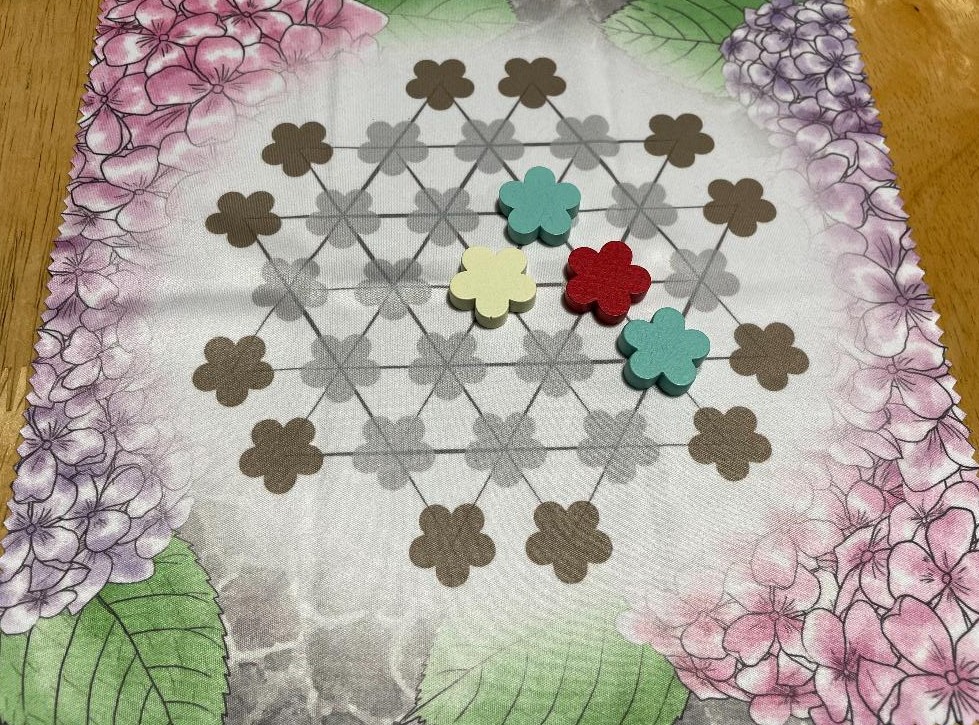 After blooming, players check for color transition. Any flowers, including white flowers, sandwiched between 2 flowers of the same color along a line will become that color, in this case the red flower would become blue.

Then check the color rotation chart. 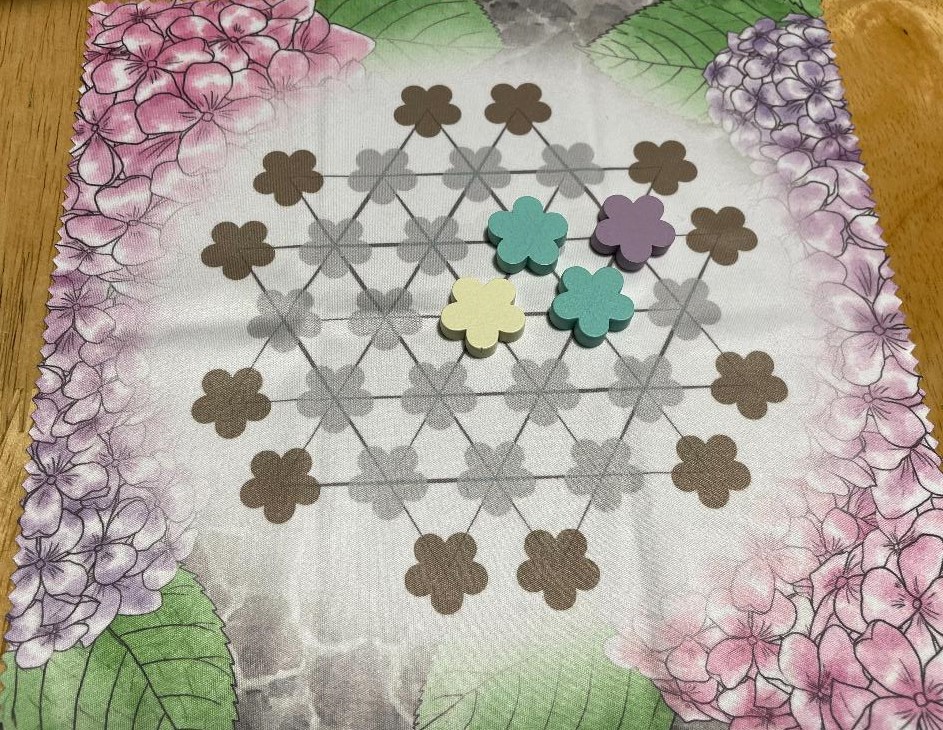 If the newly placed flower is adjacent to flowers of the color as indicated on the chart, that have not already changed, that will also apply. In this case if the purple flower is placed, the blue flowers will become purple. This effect does not apply to white flowers.

The game ends when either there are no white flowers in the supply (they are placed on the board if a color change is indicated and no further flowers of that color are available in the supply) or when the board is filled. The player with the most flowers of one color wins. There are also two variants included with the rules in this game.

As a gardener I really love the theme of this game and appreciate the way the designer incorporated it into game play. It’s quick but challenging play and will travel well with the small size of the box.

NB: Games were purchased for my own use and are not review copies. These games will be coming to KS soon for a second edition. https://www.kickstarter.com/projects/nanatsumu/fujiyama-with-ajisai?ref=clipboard-prelaunch