I’ve been working on a “Publisher Diary” for BGG for a while, which details how Bezier Games has grown with a focus on Essen Spiel for the past six years. As I was doing that, I noted the games that I had purchased each year. It’s become a ritual of mine to put all the games I bring back with me stacked nicely on a table and to take a picture of that stack (being careful to view all the games in that stack), and also to create a geeklist of those games I purchase. So I have both a written and visual record of those purchases.

Recently, I organized my games in our game room and updated my BGG account to accurately reflect what I own and what I previously owned. Since BGG lets you export that info to a CSV file, I did that and took a look at the data in Numbers (‘cause it’s prettier than Excel). My initial goal was to learn how many of the games I purchased at Essen Spiels I still currently owned. As I was doing that, however, I noticed a whole bunch of other really interesting statistics that I could pluck from the data.

Before we get to the meat of the analysis, a little background: I’m just as crazed a game owner/player/collector as many other people in our hobby, and I look forward to Essen Spiel both as a gamer and as a publisher/designer. As a gamer, I drool over the new games like everyone else, and I make a lot of poor purchase decisions based on a few minutes of seeing a game in action, listening to the publisher or designer describe the game, just reading the box, or even just because it’s the new game from Designer/Publisher X. Last year I went on a crazed spree at a downtown Essen store before the show and purchased a dozen or so Haba games with nothing but a single paragraph of English on the box to guide me. I buy a lot of stuff I (1) don’t ever play and (2) end up selling after a single play (usually at a loss). Of course, I would prefer not to do that, and hopefully the fact that I’m doing this analysis will help me avoid that in the future.

From 2005-2010, I attended every Essen Spiel (six of them) and purchased a total of 263 unique games. I have also purchased a number of games I don’t include on this list, like backup copies of card games (I have enough Wizards and Tichu’s to last me 10 years at least). Those games include both new (208) and used (55) games (the used game market is rich with bargains and hard-to-find-in-the-US titles). I categorized the “new” games as in shrink, new to me, and published within the same or previous calendar year (sometimes I just don’t hear about games until I’m Essen, even if they’ve been out for a while). I’ve averaged really close to 80% new game purchased vs. used each year, with very little fluctuation (the least was 74%, my first year there, and the most was 84%, my second year there). 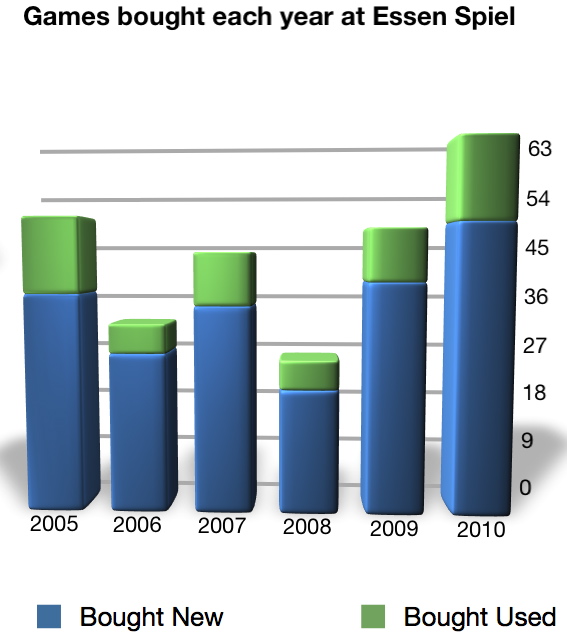 So for all those games I’ve purchased, how many do I still own? Well, that’s unfortunately a somewhat sad story. I still own only 155 of those 263 game purchases. In fact, if you look at my overall collection of games, Essen purchases represent just 24% of my 640+ game library. Comparing Previously-owned games makes it even clearer that Essen purchases are more likely to be sold than ones I purchase at other times during the year. And that doesn’t include the wacky buying spree that I had (like so many other gamers) right when I got into the hobby…how many new-to-the-hobby people have gone through the top 10/50/100 and started ordering willy-nilly from Boards & Bits or another online reseller? Take away the initial “oh-my-god-i-had-no-idea-these-games-existed-and-i-want-them-all-right-now” first year purchases, and I’m certain that Essen games would be more than half of my previously-owned games. 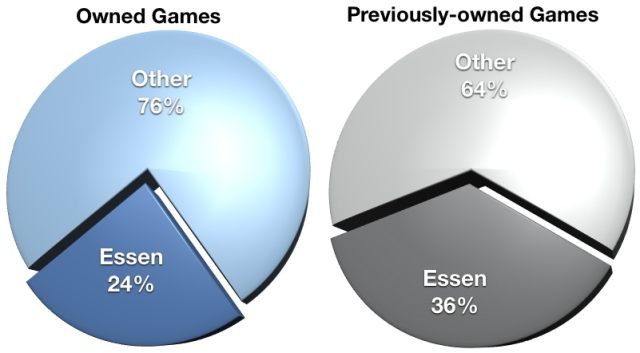 Used games that I’ve purchased at Essen have fared better than new games, probably not surprisingly. I’ve gotten better in subsequent years with used games, purchasing games almost always that I’ve at least heard of before, and usually even played. It looks like I’m doing better with keeping what I bought over time, especially in 2010, but part of that number is due to the larger number of games and just never playing a bunch of them (more on that shortly).

Moving on, let’s take a look at the games I’ve played and those I haven’t. Of the games I purchased at Essen, I’ve played 70% of them (slightly higher than what I’ve kept). But that means that I’ve never played, not even once, 78 games that I purchased there. Why would I buy games that I don’t play? Great question, and let me assure you that I’ve never purchased a game at Essen that I thought I wouldn’t play. Some were clearly on the fence in terms of how much I’d like it, but I figured I would play it eventually. And for used games, a quick scan shows that I’ve played only 11 games prior to their purchase (all used). All except one of those I still own. 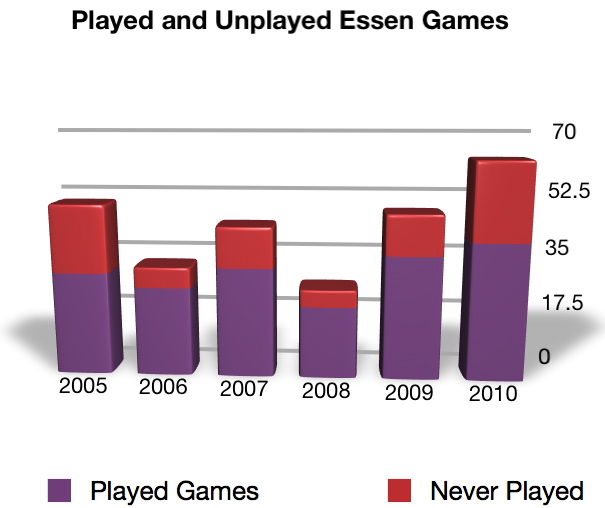 If you break those games down by what I’ve kept and sold, a scary number emerges: 16% (about 1 in 6) of the games I buy at Essen I never play. I just sell them, unplayed. Now this can happen for a number of reasons: Maybe I can’t find anyone to play them with. I’d like to think this is the root cause of this high number, but I know that’s not it. I tend to be one of the people in our game group who brings the new games to the table first, and the group in general likes trying new things. The reality is that away from the halls of the Messe, those once-sparkling games have lost their shine, and I just don’t feel like playing them. Part of this is that I hear from other folks that they don’t like the game after they’ve played it, which certainly doesn’t make me all that excited to try it out. Part of it is that I struggle with reading rules…unless I know I’m going to play the game, I usually don’t invest the time to read the rules for it.

Some of the games I got at Essen in 2010 and haven’t played yet (that are sitting on my shelf waiting for me to play them) include Merchants & Marauders, 51st State and Inca Empire.

Finally, let’s look at the ratings for Essen games I’ve purchased. Overall, it’s of course hard to glean much from the BGG ratings, since the numbers are so tight, but it’s interesting to note that the BGG average is really consistent relative to my average, which has increased, particularly in the last three years. Am I being more discriminate? Or am I merely a victim of the “liking new games more than the old ones” syndrome (oddly enough many gamers are victims of the opposite). 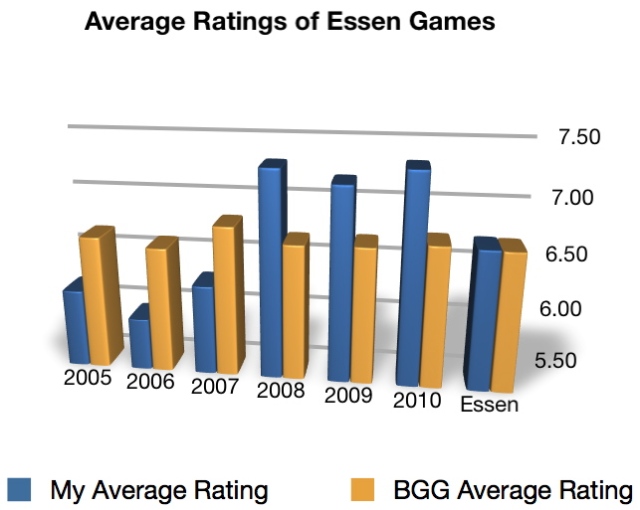 So, after digging into these numbers and trying to figure things out, what have I learned? Well, I’d love to say that I learned I need to be more judicious in my selection of games for purchase at Essen. That seems obvious. On the other hand, the fact that I seem to be getting better at picking games that I’ll like means that I’m doing something right. The never played and sold number is probably the one that I need to keep in the back of my mind this year as I’m perusing the latest games; Is there a good chance I might never play this game, and if that’s the case, shouldn’t I pass on that game?

In the relative calmness of my home office, it all seems very logical. Of course I should show restraint. I should think each purchase through before buying, and not be swayed by Hanno’s slick salesmanship at the Lookout booth, or the hope that the latest big box Friedemann game is going to be another Power Grid. Or that Mac Gerdts is due for another hit. And I shouldn’t think that by buying the entire lineup of all of those tiny little Japon Brand games, the chances of finding a breakout winner like Fairy Tale or R-Eco increase dramatically. And that maybe I should give myself a real budget this year, so that I limit myself to the cream of the crop.

But I’ve been to Essen too many times to know that the din of multiple languages being spoken everywhere, the shiny painted wood and plastic pieces, the snazzy art on box covers and seriously, something they pump into the air in the Messe, all will contribute to another buying spree that’s going to have some big winners, but also a whole lot of losers. Oh well….

6 Responses to Purchasing Games at Essen: A Statistical Analysis