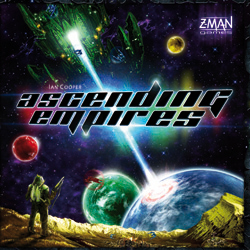 If you’re a fan of “games… in… space… “ (yep, gratuitous Muppet Show reference), 2011 is a very good year. July gave us the newest opus from the creators of Heroscape & Summoner Wars, Battleship: Galaxies. (I’ll be reviewing that pretty soon, btw.) Of course, we’ll talking more about Ascending Empires in just a moment…

And coming in the next few months are:

That’s some mighty fine space gaming ahead for all of us who cut our teeth on Heinlein’s Starship Troopers (yes, both the book & the original Avalon Hill wargame) and Buck Rogers: Battle for the 25th Century (yes, both the TV show & the TSR board game)… and it doesn’t hurt that the first one out of the gate, Ascending Empires, is a keeper.

That said, I need to get something really important out of the way – Ascending Empires has been described by many people (including myself) as a weird & wonderful cross between a dexterity game like Carabande or Catacombs and a space civilization game like Twilight Imperium or Starcraft: the Board Game. There’s two problems with that description:

Players begin with a home planet (which, thanks to some kind of unexplained technological marvel and/or diplomatic agreements, can not be attacked by other players), a small army of soldiers/settlers and a couple of starships. In turn, player begin to explore the board, settle planets, build stuff (colonies, cities & research stations), advance their tech levels… and, as time goes on, attack other space empires. Various actions give you victory points (destroying starships, capturing planets, improving your tech & mining valuable resources) during the game, while building up your infrastructure & expanding your empire is worth points at the close of the game. The player with the most points wins.

OK, a gamer-y aside: I just typed the sentence: “The player with the most points wins” after describing how to get victory points & it has occurred to me that is the one of those moments that belongs in the Department of Redundancy Department. Who else is going to win? The guy who has the least points? Sheesh. Alrighty then, moving on…

Many space empire games have long player turns where you do all of the things listed above – but Ascending Empires limits players to one action per turn, which has a couple of neat effects on game play. First, the game moves along at a blistering clip (once you’ve got a game or two under your belt) – there is very little downtime. Second, players have the opportunity to react to the actions of other players (or the perceived plans of other players) quickly… while it’s not a real-time game, the quick turns & ability to react makes it feel that way. 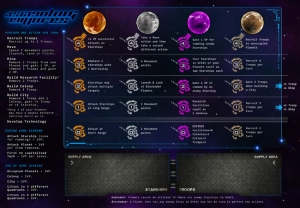 As well, players are limited on their resources: to launch a ship, you have to return a soldier to your supply. To land on a planet, you have to do the same with a ship. To build a colony, city, research station or mine, once again your soldiers go marching off to your supply … and since you have only 2 starships & 6 soldiers to start with, the management of those finite resources is a key part of how your space empire develops. (Building cities & increasing your tech levels give you access to more soldiers & ships in supply… thus allowing you to expand a greater rate.)

As mentioned before, movement & combat are dependent on flicking – but with an occasional exception, most of those flicks are short hops rather than attempts to cross the board in a single jump. While there are times when you want to ram the starship of another player (this is a cost-effective way to get rid of an enemy battleship, normally worth 2 starships in combat), losing your own ship is costly and so finesse is important. As well, certain tech modifications can give your opponent points for being rammed – another reason to avoid spectacular collisions in space. 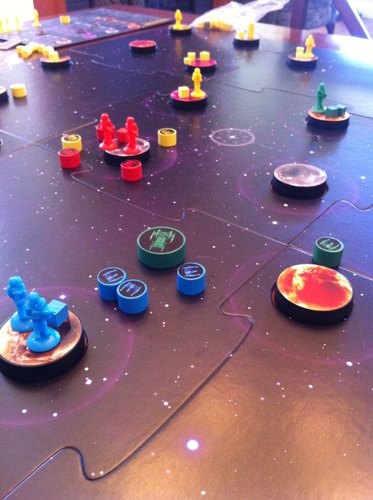 picture courtesy of rywilson from BGG

Here’s some things I’ve really enjoyed about the game:

If you’ve heard of Ascending Empires before, you’ve also heard of the one possible problem with the game: the puzzle-cut board.In a game with flicking, the optimal way to have published this game would have been to sold each game with a one-piece Plexiglass board – but then NONE of us would have been able to afford it. After much testing, the puzzle-cut board was found to be the best solution that balanced cost & usability.

Personally, I have had very few problems with the puzzle edges interfering with movement – and board warping just isn’t an issue in the dry hot climate of the Central Valley. (For those of you in less arid climes, Z-Man has thoughtfully provided a bag to seal the pieces in between games.) There are a number of “fixes” proposed by users on BGG – here are a few that I like:

Please, don’t let allow the moaning & groaning about the board keep you from buying Ascending Empires… or any “I don’t do flicking” prejudice keep you from trying it. This is a well-balanced & fast-playing space empire-building game that isn’t quite like anything else you’ve ever played… and is worthy of time on your gaming table & a place on your game room shelf.

Opinions from Other Opinionated Gamers

Frank Branham: Total game of the year kind of stuff for me from this one. The incredibly fast and fluid play is absolutely intoxicating. The rules are also at a level of simplicity that makes most things easy to grasp (except for the concept of planetary defense–the lone exclusion on the otherwise excellent player mats). I am also stunned at how well space conquest things are represented. In a game, you rarely get the all-out space fleet battles, but sneak attacks, piracy, blackmail. Ships patrol your boundaries looking for weak spots as well as to discourage the aforementioned nastiness.

As to the board, I think most of the problems are actually with the weight of the fighters. The cracks in the board are only potentially a problem for long, risky shots, and only really a problem with the kinda tiny fighters take a roll. I actually made a board with hardboard, poly, and car wax. Long shots are more possible, but there are still the occasional roll-off-the-board and die issues. In fact, the smoothness of the board makes the close shots harder than the textured base board. The game seems to generally push close shots, so the included board might be better. Neither board has really altered my opinion of the game.

I love it!… Mark Jackson, Frank Branham
I like it…  Ted Cheatham
Neutral…
Not for me…

follower of Jesus, husband, father, pastor, boardgamer, writer, Legomaniac, Disneyphile, voted most likely to have the same Christmas wish list at age 44 as he did at age 14
View all posts by Mark "Fluff Daddy" Jackson →
This entry was posted in Reviews. Bookmark the permalink.