Saturday was our last day in Messe, since we have to fly back home Sunday early in the afternoon from Koln.  Waking up was not easy thanks to two days of Messe and two nights of report. 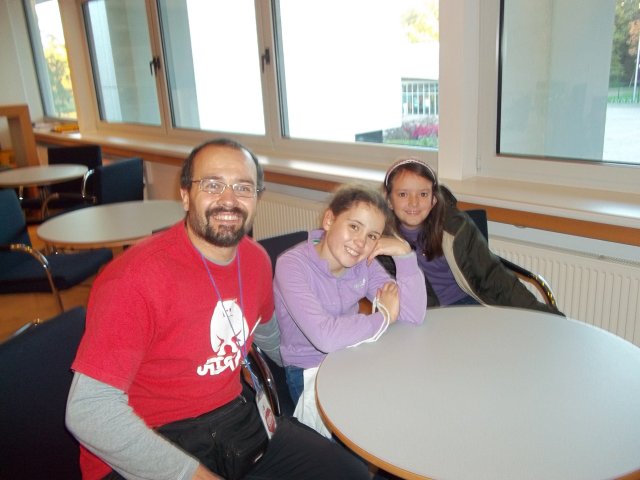 This morning I guided Caterina and her friend in a special travel in the sleeping fair.  After a quick stop in the press room we started the travel.  Just the time for a picture with Friedemann Friese:

and a quick talk about the interview for the “Art of Design” and we were ready for our first play in the big Carabande track in hall 5.

We stopped at the Ilopeli booth to play Sherlock, a really nice collaborative version of memory. Players have to identify the suspect before Moriarty e

scapes. The game is set up by putting the cards in six columns and five rows, each are put face down on the table. Each column has a different character in the rear side and the 5 cards of each column are actually the 5 suspects. Players have to find three-of-one-kind. Every time a player misses, a countdown goes over and after 10 mistakes Moriarty escapes and we lose. Of course thanks to the different background the game also has a deduction part and you have to really think well here. We lost two times and then we were finally able to catch Moriarty.

Caterina also played The boss from Trophe and liked it so much I also have to buy it. I hope I’ll be able to play again starting from next week.

Then we played Terra Evolution, a really nice deck-building game about evolution. You have population cards, animal cards, and continent cards. During your turn first you play your population cards in front of you then you can play an animal species and a continent. The animal cards can be played directly on a continent or replacing a less evolved species — in that case the replaced animal goes in your score pile. Every time you play a new animal you also get new population cards in your deck. Then you can play a disaster against an opponent and finally you can buy a new card (animal or disaster). The only way to actually lose population is being hit by a disaster card. To win you have to get 10 points of animals in your score pile and have a mammal and an avian species on your continents. Caterina and her friend quickly understood the rules, which are easy if you have some experience with deck-building games. Really a nice game … unluckily it was already sold out!

Another stop at play-mais booth: in the while I’m gone to try Nefarious with Viki.  The game seems to be perfect filler. You are a mad scientist trying to make inventions. Every turn players simultaneously and secretly decide which one of 4 actions to take: suspect (allows you to place a worker … the way to make easy money), invent (pay money and build an inventions), research (take new inventions card), and finally money.

The games play well and quick. To add longevity to this filler there are “project” cards. Every play two cards are revealed from the deck and probably these cards display “rules” used during the entire match.

Today the time seems to be someway altered and … puf … it was already late afternoon.

We walked and ate but did not play too much. Just time for another Sherlock in the press room and Dungeon Fighter (together with the designer). Dungeon Fighter is a really innovative dungeon crawl. The party enters the dungeon (down) trying to find the exit (up). Every turn the party moves and fight if there are opponents. This is done by throwing a die into a “bersaglio” … more the dice arrived close to the center.
At 19:00 we met with Frank and Ignacy: we were invited to a special dinner at Kulkmann’s: the dinner was great but unlucky house because we were too tired to setup a game.

Back in the hotel just time for another Sherlok game and Beetlez.

Our Messe experience is over and was great! Now I can go back to normal reviews and interviews.

Andrea "Liga" Ligabue is a game expert contributing to many games related international projects including Gamers Alliance Report, WIN, ILSA Magazine and Boardgamenews. Member of the International Gamers Awards Committee is coordinator of Play - The Games Festival and founder of the project Ludoteca Ideale.
View all posts by Andrea "Liga" Ligabue →
This entry was posted in Convention Report. Bookmark the permalink.