I passed this title by last fall, amidst the general buzz of the bigger, heavier games released at Essen. Seeing the lack of reviews under the entry on BGG, I guess I wasn’t the only one! I was lucky enough to obtain a copy recently and as I started reading about the game it sounded more interesting as I generally like building games.

OddVille comes with one small board to track player resources, 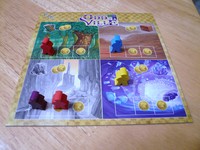 meeples for up to 4 players, and 3 types of cards. Like some of the best card games, the main deck consists of cards that serve 2 purposes. On one side a coin is pictured and players take these cards as they gain money and spend them to pay costs. The other side shows different buildings which require resources to build and provide points for the endgame and bonuses when built.

Each player also has their own identical deck of 4 worker cards which determine how much money they can earn, which resources they can take, and the price for which building cards can be obtained. 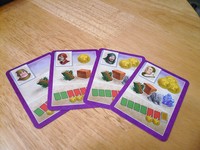 Lastly there are 4 types of guild cards (3 in each guild). Each of these cards give a special bonus ability on a player’s turn. 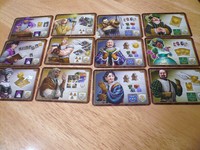 When you use a worker card it is no longer available until the workers cards are picked up again. If you have used all 4 cards on your previous turn you may pick them up for free. If you still have cards in your hand, it costs a coin per card in hand to pick up the used worker cards. The key is that each cards lets you collect differing amounts of money or a differing resource or pay less to pick up certain building cards.

When you take take money you take cards from the main deck without seeing what building is on the other side. When you take a resource, you add a meeple to the resource board paying the required cost if any. If you take a building you pay the cost for the position of the building in the face up row of 6 building cards.

When you build, you remove workers from the resource board of the appropriate resource, and gain any bonuses such as extra resources or money from the building built. You also get bonuses from adjacent buildings if connected by a road. If the building has a guild symbol on it, you may take one of the face down guild cards and place it face up in front of you.

If the guild is empty, all cards are returned to form a new deck and then a guild card is drawn.  You place a worker on the building. 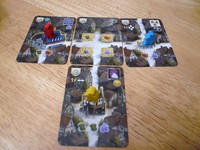 The game ends when a player has placed 6 workers on the city. You then add building points, 1 point for each worker on a resource and points from guild cards.

My impression – I Like It! Maybe not my favorite as far as city building games from 2012 go, IMHO, but a solid design. I think it’s nicely accessible to people who prefer lighter games. The rules are straightforward. The games plays quickly and can make a nice filler.  There are some opportunities for player interaction in taking advantage of what other players have built to gain bonuses.  Also trying to force an opponent to return a nice guild card by building is a good tactic as well.

I have played with 2, 3, and 4 players and I think I prefer it with 4. The 2 player games seems to end a bit too quickly and there is less opportunity to take advantage of some of the buildings that give endgame bonus points.

Jeff Allers: Since Mariano of What’s Your Game moved to Berlin, I had the chance at a sneak peak of the early prototype, so I was looking forward to playing the finished game.  Contrary to its title, there’s nothing particularly odd about this nice city-building filler in a small package with a quick playing time, and it certainly deserves more attention than it has received.  I like the action selection mechanism, the simple resource management system, the tile-laying, and the card drafting, and everything fits together in an efficient package.  The only caveat I have is with all the number of small symbols and the difficulty of distinguishing them on the dark background of the city cards.  Like other lighter city building games (The City and Suburbia, for example), there is a lot of comparing symbols and (similar to Suburbia) checking card adjacencies.  This can sometimes slow down a game that has an otherwise good pace to it.  Those who like these kinds of games, however, should definitely check OddVille out.

Dale Yu: I liked this one – it’s a quick card game that combines card play and some tile-laying features as well. The hand management aspect with the cards in your hand is neat, and gives players the choice between maximizing numbers of lower valued commodities versus fewer more valuable ones.  My only complaint, if anything, about this game is that it seems about one or two turns too short.  Even when I’m the one playing the 6th worker, I kinda wish that the game had one more meeple, because I’m just getting to the interesting point (for me) with all the possible interactions between the buildings.

Ratings from other Opinionated Gamers:

Not for me: Tom Rosen