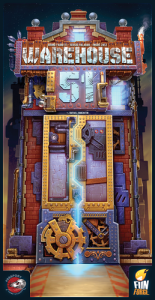 At the end of the classic Raiders of the Lost Ark film, an anonymous clerk is seen wheeling a large crate containing the fabled Ark of the Covenant into a cavernous warehouse that is filled from floor to ceiling with thousands upon thousands of other crates.  One can only presume that these crates also contain treasures and artifacts from antiquity that have somehow made their way into the hands of the U.S. government.  As one would expect from the obese government bureaucracy, this newly acquired priceless treasure will likely be stored and quickly forgotten, lost in mountains of records that will go unseen for eternity.

Designers Bruno Faidutti, Sergio Halaban and Andre Zatz have borrowed this premise in Warehouse 51, an auction-driven card game wherein players represent investors vying to get their hands on history’s precious relics and antiquities.  Warehouse 51 itself is a mythical U.S. storage facility where these relics are stored.  So just why are these relics being sold?  It seems that the U.S. government is bankrupt (sadly, a not-so-fantastical premise) and is breaking open the doors of Warehouse 51 and selling the relics contained therein.  But, there is a potential downside:  some of these relics are cursed (which may explain why they’ve been hidden for all these years), while some may ultimately be proven to be counterfeits.  Let the buyer beware!

Relics are depicted on cards and are divided into four varieties (colors):  Western Fantasy and Literature, European Mythologies, Near and Middle-East and Eastern Cultures.  Each relic has a value of 1 – 3, and there are incentives to collect the greatest value in each category as well as having relics from each category.  The relics are separated by category and each deck is placed face-down.  Players begin the game with 10 Ingots and a player aid card, which depicts the number and value of cards in each category.  This is important knowledge when deciding which relics to pursue. Between each player is placed a face-down counterfeit card.  Players may look at the cards to their left and right, but the identity of the other two is initially a mystery.  These cards will ultimately reveal which artifacts are proven to be fakes.

Each turn the active player reveals a relic card from one of the decks for auction.  The type of auction conducted — open or closed fist — is indicated on each card.  Players may not bid more than the amount of Ingots they possess, but are allowed to pawn relics they current own if their treasury is less than five Ingots.  They receive five Ingots for the pawned relic, but if they desire to purchase it back at game’s end they must pay double that price to reclaim ownership.  Ouch.

The winner of an auction pays the amount bid to the player on his left.  This is a devious little mechanism that often affects a player’s actions during a bidding round.  A player low on funds will be rooting for the player to his right to win the auction so the winning amount will be passed to her.  Further, a player may drive-up a bid, then drop out when the player to his right is the current high bidder, hoping everyone else will also pass.  Other than pawning relics, having the player to your right win a bid is the only way to acquire money.

A relic won at auction is placed face-up in front of the winning player, who enacts any

immediate special effects it may convey.  Many relics have no special effects beyond their value and category, but others convey certain benefits or even curses.  For example, David’s Harp allows the player to look at one of the Counterfeit cards located beside another player, while the cursed Star of Destiny prohibits the player from participating in the next auction.  Some effects are permanent, while others trigger at game’s end.  For example, the Peaches of Immortality cannot be counterfeit, while the Unicorn’s Horn allows the player to cancel one of the counterfeit cards when they are revealed.

There are a variety of special benefits and curses, adding some interesting choices and nuances.  For example, a player may not desire or really need a particular card for its value and/or category, but the special power it conveys may make it worth acquiring.  While curses are usually unfavorable, the player may need the card to complete a set or increase his chances of capturing a majority in a particular category.

The game continues, auction-after-auction, until all relics have been aquired.  At this point, players have the opportunity to re-purchase any pawned relics, and players possessing cards that grant a “certificate of authenticity” can place the matching token on one of their relics.  This protects that relic if one of the counterfeit cards reveals it to be a forgery.  Counterfeit cards are then revealed, and all matching relics not protected are discarded. 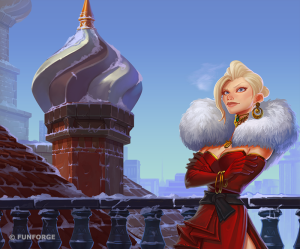 I admire the theme of Warehouse 51, which combines the plausible (U.S. going bankrupt) with the non plausible (fantastical and mythical relics held in storage).  The presence of benefits, curses and forgeries helps add more interest to the game and allows for more difficult decisions.  The “winning bid passes to the left” mechanism also makes for interesting choices.

Aside from these elements, however, the game is rather bland with a “same old, same old” feel to it.  I am not a tremendous fan of the auction mechanism, as it is often difficult for many players to correctly perceive the value of various items.  This often leads to highly inflated bids and can often result in one or more players skewing the game.  The fact that each and every round — and there are 26 of them — has an auction at its core makes the proceedings grow very repetitive and tiring.  Reiner Knizia’s Modern Art is also auction heavy, but there are a greater variety of different auction types and different objectives to pursue.

Bruno Faidutti is well known for adding chaotic elements to his designs, but surprisingly Warehouse 51 has far less than most of his games.  There are a few cards that will allow a player to swap a relic or discard a card, while others will affect values if certain cards are in or out of a player’s collection.  Of course, since these cards are being auctions, players have the opportunity to avoid or pursue these, finances permitting.

Warehouse 51 has an intriguing storyline and some interesting aspects, but it simply fails to excite.  It is too long to be a filler (most games last about 45 minutes or so), but doesn’t have enough substance to be a featured game.  Fans of the auction mechanism may well be keener for the game than me, but I feel most will likely find the game to be average at best.  Unfortunately, there aren’t any hidden gems in the game that are as exciting as those that are apparently tucked away in the U.S. government’s warehouses.

Greg Schloesser is the founder of the Westbank Gamers and co-founder of the East Tennessee Gamers. He is also a prolific reviewer of games and a regular contributor to numerous gaming publications and websites, including Counter, Knucklebones, Boardgame News, Boardgame Geek, Gamers Alliance and many others. Greg has been a gaming enthusiast his entire life, growing up in our hobby mainly on the war game side. His foray onto the internet exposed him to the wonderful world of German and European games and now nearly all of his gaming time is devoted to this area of our hobby. He travels to several gaming conventions each year and is the co-founder of Gulf Games, a regional gaming get-together held in the Southern USA. Greg was born in 1961 and lived his entire life in New Orleans before moving to East Tennessee in 2005. He is married and has one daughter (now married.)
View all posts by gschloesser →
This entry was posted in Reviews and tagged Bruno Faidutti, Passport Studios, Warehouse 51. Bookmark the permalink.