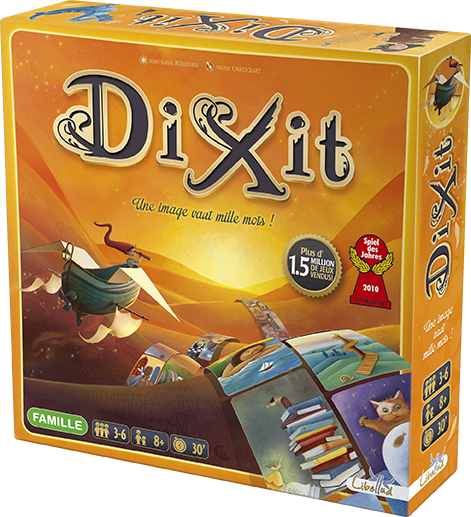 Dixit: What do you see?

Jean-Louis Roubira, a child psychiatrist by training and profession, is also a prolific author, composer, and game designer.  His first published boardgame was Jericho, an abstract strategy design released in 2001.   Though Dixit wouldn’t be published until 2008, Roubira first got the idea for the game in 2002, and his prototype was complete by 2004.

Roubira has said the game was forged from his love of words, poetry, and his experience with Jeu du Dictionnaire (“The Dictionary Game”), a parlor game similar to Balderdash.  He adds that he may have been subconsciously influenced by his work as a child psychiatrist.  Dixit arose from Roubira’s desire to create a more fluid game than Jeu du Dictionnaire, one without the need for writing.  In 2002 the idea of using dreamlike images came to him, along with many of the game’s rules and the scoring system.

Roubira showed the completed prototype to Régis Bonnessée.  Bonnessée and Roubira had met at a game convention a decade earlier, and the two men — who lived in the same city in France — became friends.  As Bonnessée would later tell MeepleTown, “I immediately liked [Dixit] and then I showed it to Asmodee, but they did not retain the game. That’s when I decided to edit it. It took more than two years. I had to find the money since I didn’t have any, find an illustrator, and fine tune things. Meanwhile I continued working. And then the game finally launched in November 2008. A few months later it was chosen for Game of the Year in France (As D’Or) and that is how the beautiful adventure began.”  Dixit essentially became the game that launched Libellud as a publisher.  Other than the card illustrations, few changes were made to the design of the game.

The ideas for the Dixit cards came primarily from Roubira and Bonnessée.  Bonnessée posted ads in art schools and on websites, looking at hundreds of portfolios before hiring the original artist, Marie Cardouat.  To select the subject matter of cards, Roubira and Bonnessée would meet weekly, sharing their ideas, before passing the concept onto Cardouat, who would create the cards using acrylic paint.  The goal for each card is to open the imagination and not lock a player into a particular reading.  Other artists were brought on for later expansions, many creating the images digitally.

Libellud released a multilingual version with German rules in 2009, and the game was nominated for the Spiel des Jahres in 2010.  The game was announced as the winner in late June 2010, beating out fellow nominees Fresco, Roll Through the Ages: The Bronze Age, Identik, and A la Carte.  In giving Dixit the award, the jury praised the game’s artwork and how the game invites players to dream.  Roubira, Bonnessée, and Cardouat all travelled to the ceremony to accept the award.  They were thrilled to win: noting that Dixit didn’t resemble past SdJ winners, they thought their chances were slim.

Dixit would go on to sell more than 1.5 million copies, and it is still in print today.  It has been published in more than a dozen and a half languages, and it has spawned several spin off games and expansions.  There is an iOS edition.  Jean-Louis Roubira continues to design Dixit expansions.

Each player is dealt six cards.  The game will end when a player reaches 30 points or when the last card of the draw pile is drawn.  The player with the most points at the end of the game wins.

One of the players is the “active player” for the current game round.  That player looks at his six cards, picks one, and then says a clue out loud.  The cloud can be a word, a phrase, or even a sound.  As the rules state, it can even “be invented on the spot.”

The other players then choose among their six cards which one seems to best match the clue given by the active player.  The selected cards are handed to the active player, who shuffles them with his or her chosen card.  The cards are then set out in order.

The non-active players now vote on which card they think is the active player’s card.  They cannot vote for their own card.  The put their vote tokens upside down near the game board.  Once this is complete, the tokens are flipped over and scoring occurs.

The score tokens are moved.  The game ends when a player reaches 30 points or when the last card of the draw pile is drawn.  The player with the most points at the end of the game wins.

The game plays slightly differently with three players.  Players have 7 cards in their hand instead of 6.  Each player takes 5 vote tokens, and after the clue is given, each non-active player plays 2 cards, making five total cards available.  The voting and scoring rules do not change, and at the end of each turn, the players draw back up to 7 cards.

Does it stand the test of time?  My thoughts on the game…

The appeal of Dixit — other than the gorgeous artwork, of course — is that it can be played by anybody.  The rules are simple, and the most complex part of the game — the scoring — is easily handled by any player who understands the rules, so you don’t need everybody to master it.  I’ve played Dixit with a wide audience, everybody from gamers to grandparents, and it has generally been a hit.  It is easy to see why: the game inspires creativity, and it is fun to see what others around the table think a clue means.

The artwork is beautiful, and the cards work exceptionally well together.  The depth within the images adds considerably to the replayability, and I constantly notice new details and new interpretations.  Even clues that seem exceptionally narrow often are open to interpretation.  Sure, the cards do get old after a while, but that’s why so many expansions — each of which are equally beautiful — have been released.

Like many party games, Dixit succeeds or fails based on who it is played with.  I loved my first couple of plays, then had a bad string that nearly soured me on the experience.  The scoring mechanism is clever, but inside jokes are rewarded, and that can make the game slightly exclusionary.  This aspect of Dixit has never bothered me, but it has bothered some people I’ve played with.

Despite my enjoyment of the game, I recognize that it isn’t for everybody.  It is indeed a party game, and I see why it wouldn’t have much appeal to strategy gamers.  For a game with a similar feel to Dixit with a bit more strategy, I recommend Barbarossa.  For a cooperative version, I recommend Mysterium.

Would Dixit win the Spiel des Jahres today?  I think it would have a good shot: it is difficult to bet against a game that has sold millions of copies and is still widely popular.  But I think victory is far from certain.  From my vantage point Dixit’s mechanism has been dressed up better (for example, in Mysterium), and I think Dixit’s victory came in a relatively easy year (although it is, of course, never easy to win the SdJ).  Dixit is one of the finest examples of what it does, but I think it might face tough competition.

Patrick Brennan: It works well enough, crossing Thingamajig with Apples to Apples. Instead of a word, you pitch in a secret picture with a cryptic clue. The pictures are suitably wild and esoteric, allowing for all sorts of weird clues. You get through the whole deck in each game, so the trick is either to play with the same group each time and watch the emergence of more clever clues for the same old pictures, or continually play with new groups to keep it fresh. Or buy expansions. It’s one of the downsides. It’s simple, it’s enjoyable enough, it’s not too long for what it is. It’s got the same card luck as Apples to Apples – either you’ll have something that’s close to the clue given or not. So you can’t take it too seriously. It’s not something I’ll seek, but I’d say yes if anyone wanted to play. As long as it’s occasional, not all the time.

Greg Schloesser:  Dixit simply never resonated with me.  I found it mildly amusing, but not much fun.  Of course, I am not a fan of Thingamajig, so that may have tainted my impression.  Still, I played it several times, but never found the fun others had located.

Larry:  Dixit really doesn’t work for me.  My interpretations of the pictures are rarely similar to anyone else’s at the table.  Maybe I’m just too literal minded, at least when it comes to images.  (For example, I struggle even more with Mysterium, but I do quite well with the non-literal thinking required for a verbal game like Codenames.)  I don’t actually mind playing it, but I get so little out of it that it really makes no sense for me to participate.

Matt Carlson: Not something I’d play with a boardgaming crowd, but I find it more entertaining than Apples to Apples when playing with a more general crowd.  I think the artwork is what really does it for me.  It is pretty and just a bit crazy, allowing for plenty of interpretation.  It isn’t a game where the “best” player wins, but it is a fun experience.

Joe Huber (3 plays): Dixit’s a fine game that I do truly enjoy playing – but would never suggest.  There are lots of games like that; nothing makes Dixit particularly stand out among those games, _except_ for the fact that it’s a good fit for some crowds who enjoy the creative thinking aspect.  I haven’t played in years, but I would play again without concern if asked.

Andrea “Liga” Ligabue: It is not the kind of game I think I would like but, indeed, I love it. I really like how the game is designed and how the game actually is played. It is about creating connections and relationships, trying to think what and how other players are thinking. It is great, both to play and to use in classrooms and trainings. It really deserved the Spiele des Jahres.

This entry was posted in SdJ Re-Review, Uncategorized and tagged Libellud. Bookmark the permalink.