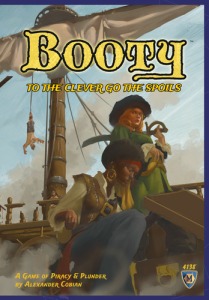 Yes, another pirate game.  I guess the theme is just so darn enticing and somehow romantic that designers and publishers just cannot resist using it.  I would assume that at some point the game-buying public would become satiated with the theme and say “enough!”  But I also assume that publishers would recognize if the situation reached this point and cease releasing games using the theme.  I guess that has not yet occurred…or my assumptions are way off-base!

Booty is a recent offering in the crowded seas of pirate-themed games.  Designed by Alexander Cobian, players are nasty pirates attempting to grab the most lucrative booty (commodities, weapons, liquor, gold, silver, etc.), control ports in the Caribbean and Atlantic, and influence the market price of their illicitly-gained loot.

The game is primarily one of card acquisition and controlling ports.  Five island tiles, each depicting 3-7 ports, are arranged in a circle, along with the Commodities market tile and the turn order “Rank” board.  A number of cards (3 x the number of players) are revealed, sorted by color and placed in the center of the ring of islands, with the first card being kept face-down.  Each player receives a supply of “might” markers, two secret “legacy” tiles and a handful of coins.  Let the looting begin!

After revealing new cards each round, the first task is to assign the Quartermaster position.  This is offered in order of rank (determined randomly for the first round).  Each 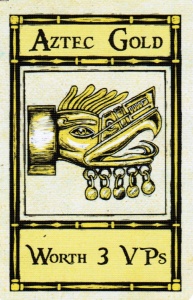 player has the opportunity to accept or reject the role.  Once accepted, that player may peek at the face-down card, and then must create one share of the booty consisting of one or more of the cards (including the face-down one, if desired) plus one “rank” coin (1-6, depending upon the number of players).  In rank order, each player except the Quartermaster has the opportunity to accept or reject the offered share.  If accepted, that player takes the cards, plays certain ones (I’ll describe this in a bit), adjusts his ranking for the next turn on the turn order chart, and keeps the rest of the cards in front of him.  If the Quartermaster did not take the share (he can only take it if everyone rejects it) a new share is offered by him.  If the Quartermaster did get the share, a new Quartermaster is determined by the method described above. This process is repeated until all players receive a share and new ranking.

When taking a share, certain cards must be played immediately: 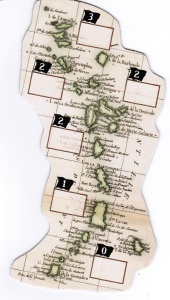 Might.  Might cards allow players to control a port or ports on the islands by placing a marker onto that port.  Cutlasses allow the player to place one marker, while pistols allow the player to place two markers.  Controlling ports are worth the indicated number of victory points (0-3), but only if all of the island’s ports are controlled.  One island will not meet this requirement, so those ports are worthless.  So, sometimes a player will select a port worth zero points just so an island can be completed. Choose wisely!

Trade Route.  Each trade route card acquired allows the player to increase the price of one commodity by one and decrease that of another by one.  All five commodities begin the game with a value of “2”, but can be altered via these cards.  The idea is to increase the price of the commodities that you have collected, while decreasing those being held by your opponents.  Usually, however, this becomes a “tit for tat” affair, and prices remain relatively equal.

The game ends when the deck expires (usually 5 – 7 rounds), after which final points are tallied.  There are six different types of cards that will earn points:

Treasure:  1 – 3 points each, depending upon the type.

Relics:  There are six different types of relics (ivory, monkeys, parrots, etc.), each worth 3 points.  However, only one of each type will score; duplicates are worthless.

Commodities:  Each commodity is worth the current value as listed on the market board.

Might:  As mentioned above, players use Might cards to take control of ports.  Players tally teh value of all ports owned, but not from the island that has an uncontrolled port.

Way of Life:  Bible and Rum cards are worth 2 points apiece, but you can only score one or the other.  Men of the cloth should be avoiding the devil’s brew!

Finally, players reveal their “Legacy” tile and earn end-game victory points based on the conditions listed on the tile.  The player with the most points emerges victorious and becomes the terror of the high seas.

I am a bit weary of pirate-themed games, the main reason being that I’ve not found a pirate game that truly excites me.  Some are decent, but none are outstanding.  Merchants and Marauders probably comes closest, but it is rather long, fairly complex and a bit tedious.  Booty is on the other end of the spectrum in terms of complexity, being a light card collecting game.  So, it must be examined in that light.

The “divide the pie and choose” mechanism is always intriguing, but it does not have the same impact here as it does in Alan Moon and Aaron Weissblum’s outstanding San Marco.  The decision to accept or reject the Quartermaster position should be tense, but most folks seem to want to avoid it.  Being in that position means that you get to control the division of the cards, but you cannot take a set unless all players pass on the offering.  The Quartermaster often agonizes over how to divide the cards, but with numerous players, it is difficult–if not impossible–to anticipate the desires and whims of all of one’s opponents.  Usually each card offering is somewhat tainted by an undesired card or cards, and one player will grudgingly take it before it falls to the Quartermaster.

The commodities market really doesn’t provide the tension or fluctuation in prices that it is designed to accomplish.  It is far too easy for a player to simply reverse the adjustments made by an opponent. As a result, all prices tend to ultimately return to or near their starting value.

One would think that there would be constant struggles to gain and usurp control of the island ports. Well, one would be wrong.  Once a player gains control of a port–which is simply a matter of acquiring a Might card–that’s it.  He is never in danger of losing that port and will control it for the remainder of the game.  That seems unrealistic and, well, boring.  The board play is very disappointing.

I don’t want to be overly harsh, as the game is light and attempting to collect certain cards can be fun. The luck is reduced with fewer players, making it easier to collect desired cards.  Still, there is nothing terribly exciting here.  The game works–mostly–but fails to generate enthusiasm.  I think it is just fine as a light, family game or for playing with your friends who do not normally play games.  All others, however, may want to stay in port.

Greg Schloesser is the founder of the Westbank Gamers and co-founder of the East Tennessee Gamers. He is also a prolific reviewer of games and a regular contributor to numerous gaming publications and websites, including Counter, Knucklebones, Boardgame News, Boardgame Geek, Gamers Alliance and many others. Greg has been a gaming enthusiast his entire life, growing up in our hobby mainly on the war game side. His foray onto the internet exposed him to the wonderful world of German and European games and now nearly all of his gaming time is devoted to this area of our hobby. He travels to several gaming conventions each year and is the co-founder of Gulf Games, a regional gaming get-together held in the Southern USA. Greg was born in 1961 and lived his entire life in New Orleans before moving to East Tennessee in 2005. He is married and has one daughter (now married.)
View all posts by gschloesser →
This entry was posted in Reviews and tagged Booty, Mayfair. Bookmark the permalink.