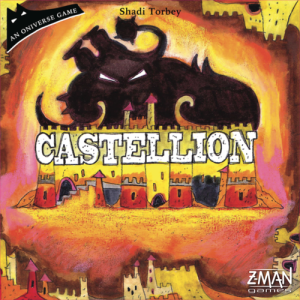 I am generally not attracted to solitaire games as I honestly do not have the opportunity often enough to play them.  Whenever I do find myself alone, I usually have household chores to do, game reviews to write, or other tasks to accomplish.  Further, for me gaming is a social activity to be shared with other people.  As such, I tend not to seek games designed primarily for one person.

Castellion by designer Shadi Torbey is designed for both one and two players, but my experience has been strictly solitaire.  I found myself alone and with a bit of time on my hands, so I played the game several times, trying the different difficulty levels.  The game has a decidedly puzzle-like aspect that may well appeal to those who enjoy those types of challenges.

The theme is a bit unusual:  the player (or players) must construct a fantastic, morphing castle to protect the realm against the dreaded menace which threatens to overrun the kingdom.  The challenge is to construct the castle in a fashion so as to meet the requirements on the three “ordeal” cards in effect for that game.

The game has three different levels in increasing complexity.  The base game–the School of Architects–introduces the basic tile-laying and construction requirements.  The Admiral’s Academy incorporates the tiles’ special powers, while The Menace (considered the “expert” level) adds even more special powers.  The base game is sufficiently challenging, while the two advanced versions are very difficult to win.  Each of these have further options–ominously entitled “Shadow of the Menace”–that make matters even more difficult.

Note that I will describe the solitaire version, indicating the rule changes for two players later in the review. 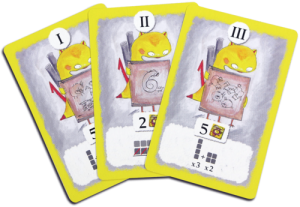 In the School of Architects version, three “Ordeal” cards are revealed, each listing a requirement that must be met.  Two stacks of tiles are formed, one containing 12 “safe” Dream tiles (no traitors) while the other stack contains 72 standard tiles.  Tiles come in four factions (colors) and three shapes (triangle, square and circle).  A player’s turn consists of drawing a tile, placing it into the castle or discarding it.  If the tile is a “defender”, the tile can be placed or discarded.  However, if it is a traitor, it must be placed next to the current Ordeal card.

There are a few simple rules when placing a tile into the castle:

*The tile must be adjacent to a previously placed tile;

*Except for the six tiles that form the foundation of the castle, each tile must be placed above another tile, which supports it;

*Except for the six tiles in the foundation, a tile may not be placed adjacent to another tile depicting the same shape;

When placing tiles, the idea is to form formations consisting of four tiles of like factions that meet the criteria depicted on the Ordeal cards.  These formations are either linear or in a square pattern.

If the player cannot or does not desire to place a defender tile, he may discard it. Be careful, however, as too many discards will result in the deck depleting faster and limiting your placement options.

Traitor tiles are not placed into the castle; rather, they are placed by the current Ordeal card.  The Ordeal requirements must be satisfied when the number of traitor tiles next to it equals the number indicated on the card.  This number is “5” on the first card, but decreases to only “2” on the second card before bumping back up to “5” on the final card.  If a player fails to meet the requirements listed on the card, the realm is overrun and all is lost.  Successfully meeting the requirements allows the game to continue.  However, when Ordeal #2 is encountered (called a “simulation”), the player first removes the six foundation tiles, meaning the second row of tiles is the new foundation.  Only after these tiles are removed is the Ordeal encountered, which requires six tiles in the foundation.  So, the player must carefully plan and make sure he has six tiles in the second row before encountering the second Ordeal.  Successfully completing Ordeal #3 (the “assault”) results in victory.

The Admiral’s Academy version introduces the special powers of the tiles, as well as the ability to destroy an unwanted traitor tile by removing it from the game…at a heavy price.  When a player does not desire to place a tile, he may as usual discard it.  When doing so, the special power of the tile–based on the tile’s faction–is activated.  Faction powers allow the player to change the positions of adjacent tiles, reveal tiles from the stacks, recover a tile from the discard pile, or slide tiles within the castle complex.  These certainly give the player more control in maneuvering the castle’s tiles into proper alignment to meet the requirements of the Ordeal cards.

The other main change in the Admiral’s Academy version is that a player may opt to destroy (remove from the game) a traitor tile instead of placing it next to the Ordeal card.  However, when a player exercises this option, he must destroy four tiles in his castle.  This can be beneficial if used with discretion.  Note, however, that there are three specially marked traitor tiles that cannot be destroyed and must be placed.

The Menace version gives each type of defensive formation a player forms special powers.  Further, each Ordeal card is triggered by the placement of only two Traitor tiles, but the failure to meet the requirements of a card does not result in immediate defeat.  Rather, depending upon the card failed, the player must destroy a certain number of tiles in their castle.  This expert version is extremely tough to successfully complete. 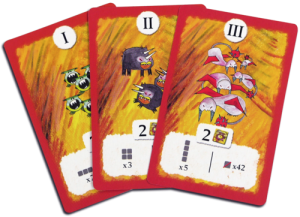 The decision tree in Castellion increases dramatically with each subsequent level, and even more so if adding the “Shadow of the Menace” options.  The basic level is more lighthearted, with the decisions mainly being whether to draw from the safe or standard stacks and whether to place or discard a tile.  There is a large degree of luck involved as if you don’t draw the tiles you need at the time you need them, there is little you can do.  That changes, however, with the next two levels as the powers evoked by discarding a tile can help dramatically in reforming your castle.  Luck is still involved, but there are now ways to manipulate your castle so you can meet those pesky Ordeal card requirements.  The final expert version does add a few more bonus powers when defensive formations are completed.  However, the Ordeals are triggered much quicker, making meeting their requirements a very difficult task.

All games have the persistent tension of revealing a Traitor tile, which progresses the inexorable march to the Ordeal tests.  There is a special power introduced in the second level that can help mitigate this somewhat, but it is never completely eliminated.  The true tension and challenge that helps make the game fun to play is trying to meet the Ordeal card requirements before that final Traitor tile surfaces.  Ultimately, this is a matter of luck, and there will be some games when you simply have no chance as these tiles surface too quickly.  Fortunately, a typical game is short (15 – 20 minutes), so you can simply play it again.

Another feature of the game is that it is fairly small and doesn’t take up too much table space.  As such, it is easy to transport.  If one travels, it would be a good choice to bring along with you to play while on the airplane or alone at night in a hotel room.

There are a few drawbacks.  I find the artwork and theme a bit bizarre.  However, I understand it fits in with the ongoing storyline created by the game’s designer.  One really doesn’t get the feel of building a castle, especially since the structure continues to shift and morph.  The luck factor may be a bit much for some, but I think this is somewhat reduced in the advanced versions.  Plus, as mentioned, the game plays quickly, so I can live with the degree of luck that is present here.

For the reasons I outlined at the beginning of this review, I will not find many opportunities to play solitaire games.  As such, I do not usually seek them.  Castellion, however, was a pleasant surprise, and its relatively small size and fairly easy, yet challenging game play may help change my opinion of this genre.

Greg Schloesser is the founder of the Westbank Gamers and co-founder of the East Tennessee Gamers. He is also a prolific reviewer of games and a regular contributor to numerous gaming publications and websites, including Counter, Knucklebones, Boardgame News, Boardgame Geek, Gamers Alliance and many others. Greg has been a gaming enthusiast his entire life, growing up in our hobby mainly on the war game side. His foray onto the internet exposed him to the wonderful world of German and European games and now nearly all of his gaming time is devoted to this area of our hobby. He travels to several gaming conventions each year and is the co-founder of Gulf Games, a regional gaming get-together held in the Southern USA. Greg was born in 1961 and lived his entire life in New Orleans before moving to East Tennessee in 2005. He is married and has one daughter (now married.)
View all posts by gschloesser →
This entry was posted in Reviews and tagged Castellion, Z-Man Games. Bookmark the permalink.