At first glance, Uwe Rosenberg’s Cottage Garden looks vaguely similar to Patchwork, his hit two-player game from 2014. But other than the fact that they both use polyominoes (those Tetris-like shapes common in Uwe Rosenberg games), there really isn’t much similarity. Cottage Garden, which plays 1-4 players, primarily involves a puzzle of polyominoes. It is a lightweight game that just about anybody can enjoy, yet it presents a think-y challenge.

Cottage Garden was released at Essen by Edition Spielwiese, and it was one of the hotter games of the convention. Eric Martin has recently reported that Cottage Garden was picked up by Pegasus Spiele for co-publication.

Players have two flower beds in front of them, and their goal is to fill these as efficiently as possible, earning points along the way. A nursery board rests in the middle of the table with various flower tiles in various shapes that will be used to fill the flower boards. 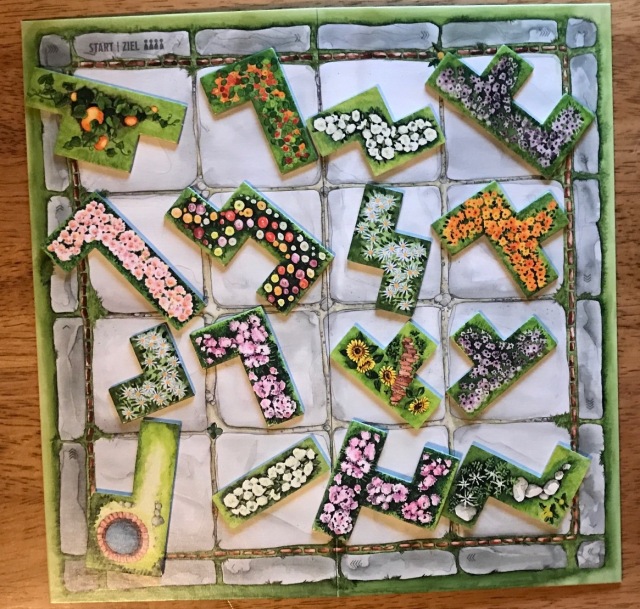 The game will last six rounds, and the player with the most points at the end of the sixth round wins. A “gardener die” travels around the nursery board, with the number on the dice indicating the current round.

After your scoring cubes cross line spaces on your board, you get additional cats. You can use it immediately, or save it for later, but you can only ever have two cats in reserve. The last space on each track is worth 20 points, and the first person to reach this space gets a 2-point bonus, symbolized by a token showing two beehives. The second player receives a 1-point bonus showing one beehive. (The same player can’t take both tokens.)

The rules change slightly in the last round, because you’ll be losing points for each turn you take. Your goal here is to finish the flower beds you have. The game ends after six rounds, and the player with the most points is the winner.

There’s also an element of managing your scoring: it is helpful to get those cats by moving several cubes ahead, but you also want to reach the end of the scoring track since that is such a significant point bonus, especially when you factor in the beehives.

And planning for the sixth round can be critical: because you lose points each turn, you need to finish your boards as soon as possible after that round starts.

The comparison to Patchwork is everywhere — even I made it at Essen — but Cottage Garden sits in an entirely different genre. Patchwork was more about “button economics” with an engine-building feel, whereas Cottage Garden is purely a game about polyominoes, one fairly described as a puzzle. Cottage Garden feels closer to Reiner Knizia’s F.I.T.S., and even comparisons to Tetris are apt. Some Rosenberg fans will be let down when they learn that this isn’t similar to his hit quilting game, but for others, the simple focus on fitting the shapes in the garden will be a bonus.

For a pure polyominoes design, Cottage Garden is brilliant in its simplicity. The game game can be learned by about anybody, and games typically take 45 minutes. That said, this can be think-y, and for players that border on analysis paralysis, this might trigger longer gameplay than should be expected.

Many of Rosenberg’s designs work well solo, and Cottage Garden is such a game. But the problem is that, at times, this feels like multiplayer solitaire. I haven’t felt that the time between turns is long — you can always plan ahead to your next move — but this often feels two, three, or four people sitting around a table solving similar puzzles. I don’t think that’s necessarily a bad thing, but if you’re looking for interactivity in games, Cottage Garden likely won’t top your list.

The theme is clever, and it works well. The artwork is attractive, and the rulebook is well designed. I had heard a few complaints about the rulebook at BGG.CON, but I just don’t see it: I find it functional, flowing well with the order of play.

In sum, if you like polyominoes and games like F.I.T.S. or Tetris, I recommend Cottage Garden. If you dislike polyomino puzzles, this probably isn’t for you. I’ve enjoyed the game, and the original theming has made it so that a couple of non-gamers in my life have wanted to give it a try.

Melissa Rogerson (4 plays, several teaching games): I like this a lot. It’s not a game that sets the world on fire, but it feels nice to play and everyone I’ve played it with/taught has enjoyed it. The theme makes it very accessible even to people who don’t identify as gamers. (Disclaimer: I helped with some minor rules clarification, but had no involvement in the game’s design.).

Larry (2 games): After reading the online rules, I wasn’t too excited by this, but I wound up enjoying the actual game quite a bit. The multiple ways of scoring (each with multiple cubes) works well and there’s a good deal of lookahead available, giving you more control than you’d expect. Since the player boards have VP spots you don’t want to cover up, this feels more like Odin than Patchwork. But with smaller boards (and 2 of them available to use), the Tetris-style puzzling was more enjoyable than it sometimes is for me in Odin. Figuring out how best to use your pussy cats was also a nice challenge. Nothing too sensational, but a good solid middleweight I’d be happy to play anytime. It may play best with 2, since defensive play is much more viable with that number, but I’ve also played it with 4 players and it was fun that way as well. So count me as a fan of each game of Uwe’s “polyomino trilogy”!

Dan Blum (2 plays): This is definitely my sort of game, but I didn’t like it as much as I expected. The tile placement just doesn’t seem to have many interesting decisions and if you end up with bad options you can spend a lot of turns taking flowerpots, which is very dull. The end result is a game that is pleasant and which I am willing to play but I definitely don’t enjoy as much as pretty much any other polyomino game (I’d certainly play FITS, for example).

Joe Huber (2 plays): Having enjoyed Patchwork, but not having need for more two player games in my collection, I was mildly optimistic about Cottage Garden.  But in practice, it fell flat for me, even when I played it a second time to be sure.  There’s enough room to plan ahead to make for a reasonably cerebral game, but not a strongly engaging one.  I would play it again, but Dan has it right – FITS is more fun, and even it hasn’t earned a place in my collection.

Craig Massey (3 plays): I’m probably one of the few who has not played Patchwork as two player games almost never make it to my game shelves or table anymore so I was more enthused than most about this. It has been extremely accessible with non-gamers and is an amazingly pleasant game to play on a rainy day. Not sure how long it will stick around, but at the very least it has me wanting to try Patchwork for sake of comparison.

Fraser (a few plays and teachings): It’s a nice lightish game and everyone I have played it with has enjoyed it.

Doug G. (3 plays): I really like this one.  Probably in the top 5 of the Essen releases once I get them all played.