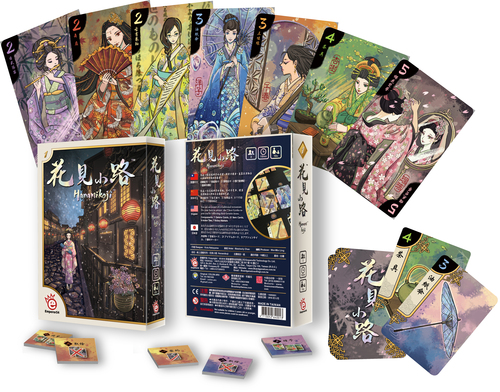 Quick Simple Fun games released Hanamikoji in the U.S. in December.  The game is currently up for a Golden Geek award in the two-player category.

Hanamikoji, which was originally released in Japan under the name 21 Flowers, was in my Top 10 games of 2016.  It is a tossup between it and Santorini for my favorite two-player game of the year.

Lorna had done a review of Hanamikoji back in April 2016, but more of us have played since then, so I wanted to do a quick re-review.

At first glance, Hanamikoji’s gameplay looks a lot like Reiner Knizia’s Battle Line.  Players compete to either take four of seven cards in a card line, or they try to get to 11 points (which beats getting four cards).  The cards range in value from 2-5, and the value on a given card is equal to the number of cards of its kind in the deck.

One card is set aside at the start of the game, players draw up to six, and the game begins.

Players can take one of four actions on their turn:

Each action will be used only once each game, so unless the game ends without a winner, there will be eight turns in total.  If there isn’t a winner, players take the markers for the cards they won, and they win any ties in the next round.

In most games I play, the game goes to a second round, although I have seen it end in the first round a couple of times.

The artwork is beautiful, and the gameplay is clever.  Hanamikoji is friendly and approachable, and given the simple rules and short play time, I think it would make a perfect “spouse” game.

The game is surprisingly think-y.  The most difficult decisions come from the “I pick, you choose” mechanic, which is implemented exceptionally well.  This is a game of anticipating what your opponent has and bluffing about what you have.

It is also an exercise in hand management.  It might be tempting to pick the third and fourth options (which use up three and four cards, respectively), but they deplete your hand quicker, giving you less room to maneuver.

Card counting is advantageous — probably a must, in fact — but the memory element (which I normally dislike in games) is manageable since there are so few cards and so many of them will end up on the table.

If you liked Battle Line or Lost Cities, or if you’re a fan of the “I pick, you choose” mechanic, I bet you’ll like this.  My only concern is replayability: though the game is deep, after about a dozen plays, I’m tiring of it.  But twenty games out of a game at this price point is really good, and I’m more prone to game fatigue than most.

Doug Garrett: Beautiful artwork and deceptively simple card play combine to make this a highlight for Shelley and me from this past Essen.  Though it didn’t make either of our Top 10 lists, it’s a game I see us turning to as a quick filler in the future.

Alan How: I liked the depth of the game and of course the presentation is excellent. Sometimes you think you can’t lose and you lose; sometimes you can’t see how you will win and you do. The mind games that you experience make the game very enjoyable and everyone I have played with have sought out a copy.

Eric Edens: I like this game a lot. Very good art and a good back and forth. My only concern is one of the times when I played it we would have gone to a fourth round as no winner was established yet but instead we quit since we were at about 40 minutes at that point. Overall great game.

Jonathan Franklin: I have played it a few times and had an interesting reaction – what Alan sees as an upside, I see as a downside.  I prefer either the Schotten Totten idea that a stack is harder to take but then stays with you, rather than floating back and forth.  Second to that would be having that intermediate position remain, so if someone takes a stack that you have, it goes back to the middle.  I guess I don’t really love the volatility from round to round in Hanamikoji.