Escape Room The Game [OG Review] is a cooperative “escape the room” game from Spin Master Ltd. that was released in 2016. The base game contains four different Adventures for teams to explore and experience. Plays must work together to solve several puzzles before time runs out. Verifying that each puzzle has been solved correctly requires the use of an electronic Chrono Decoder and associated Keys. The Chrono Decoder is unique to this game system and is used in several ways, including: it’s the game timer, it contains various ciphers needed to solve puzzles, and it verifies the code – entered by inserting Keys into the device – for each part of the Adventure.  Shortly after the release of Escape Room The Game, two separate expansion packs were also released for the game:

Each expansion includes the following components:

Important: The expansion packs require the Chrono Decoder, Keys, Hint Decoder, and a couple other components from the Escape Room The Game base game in order to play. 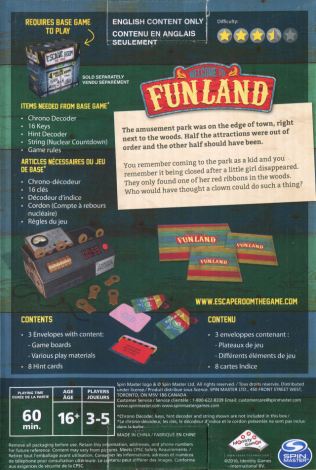 Both of these expansion pack Adventures are played in the same way as the four included with the Escape Room The Game [OG Review] base game. Below is a summary of how to play:

Below are a few additional tips covered within the game rules that are helpful to remember during game play: 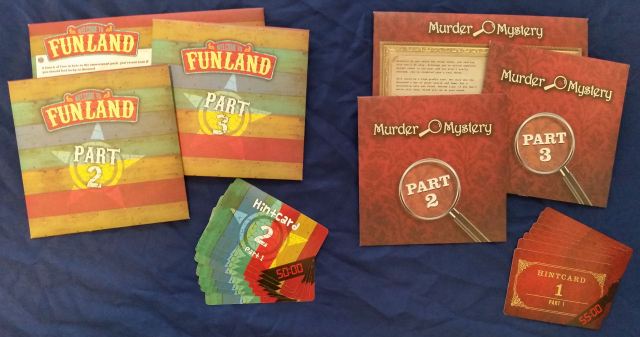 Theme – I’m always excited to see games with unique themes and an amusement park is definitely something appealing. However, it’s really just the setting for the Welcome to Funland (Funland) expansion pack and the story itself is more twisted. It’s now more clear why the expansion box lists the minimum suggestion age as 16 years old. I also always like murder mysteries and the Murder Mystery expansion pack does the genre justice within the context of an escape room game. My hope is that future expansion packs continue to explore new themes that go beyond the usual tropes.

Puzzles – One of the things that I really like about the Escape Room The Game Adventures is that there are always multiple puzzles that the team can be working on simultaneously. The story and puzzles aren’t completely linear thereby ensuring that all players are able to actively participate and contribute. The puzzles contained within these two expansion packs vary in type and difficulty and are pretty good overall with a couple of exceptions in Murder Mystery due to graphic design/printing concerns. I don’t want to say much more than that, but if somebody on the team doesn’t have 20/20 vision, then having a magnifying glass nearby may prove helpful. At least that would be an thematic addition to the atmosphere!

Difficulty – The difficulty rating for Funland is listed as 3.5/5 on the box and seems about right. Our group finished with just under five minutes remaining. The difficulty rating for Murder Mystery is listed as 3/5 on the box, but I would put it at 4/5. Even with a group of experienced puzzle solvers, we managed to jam the correct combination of keys into the Chrono Decoder in the very last second to win! We were able to do that only after looking at the final two clues in the last 20 seconds remaining.

Value – Both expansion packs provided a solid hour of activity and fun for 4-5 people. Given that they each retails for right around $10, the price is fair for what’s included and the overall experience.

Replay – As with other escape room in a box games and scenarios, each Adventure can really only be played once by a particular player. However, it’s possible to reset both expansion packs by printing replacement materials from the game website and then sell/trading/giving it away to somebody else. Technically, it’s possible not to damage any materials if a color copier is available nearby while playing.

Expansions – Given that these two expansion packs were released soon after the Escape Room The Game base game, it wasn’t clear if others were being developed. However, it appears that two new expansion packs are now listed on BGG: Casino and Space Station. They are currently Dutch only, so hopefully they will be released in English sometime in 2017!

Conclusion – The group had fun playing the Funland and Murder Mystery expansion packs. However, both new Adventures follow the same basic three part game formula setup by first four Adventures included with Escape Room The Game. This isn’t necessarily a bad thing, but it may start to feel a bit stale after awhile, especially if multiple Adventures are played back to back. It will be interesting to see if the format stays the same in future expansion packs or if some evolution and innovation will occur to keep the series feeling fresh and new. Overall, both of these expansion packs are definitely worth the time and money for those that really enjoy puzzles and escape room games.

Dale Y:  Our local group (which includes Craig V) has played just about every version of each escape room game that we can get our hands on.  I was fairly impressed with the original set of four adventures in the base set of this series, and I was definitely looking forward to trying out their next set of puzzles.  The theming and puzzles were different from the original set, though there were one or two in Murder Mystery that I felt were a bit of a stretch — i.e. we really couldn’t get to a solution without taking one of the hints, and even after the hint, it seemed like a big jump to have made on our own.

That being said, it’s nice to have a familiarity with the system and the overall format.  We played these two over a span of two weeks, one at the end of two consecutive game nights, and they were enjoyed by the group.  We will also have a nice story to tell for awhile as we managed to solve the Murder Mystery one literally in the last second.  I had managed to come up with the right answer with about 12 seconds to go, and then had to madly fumble around on the table to get the right keys and then jam them into the slots to win.  We actually thought we had lost as the timer hit all zeroes just as we heard the winning sound!

These two adventures are on the harder end of the solving scale as compared to the original four, but I think that this is to be expected… if you’re still playing these escape room games past the base set, I think it is fair to assume that you’ve learned some tricks along the way.

I'm an outdoor adventurer, kettlebell/strength enthusiast, foodie/beer guy, and a touch of geek all rolled together. Some of my many interests include: beer, homebrewing, fitness (kettlebell and barbell), travel, food and cooking, hiking, backpacking, camping, canoeing, kayaking, stand-up paddleboarding (SUP), letterboxing and board and card games, of course!
View all posts by Craig V (shigadeyo) →
This entry was posted in Reviews and tagged Escape, escape room, expansion, Expansions, Family games, funland, murder mystery, Puzzles, review, reviews. Bookmark the permalink.