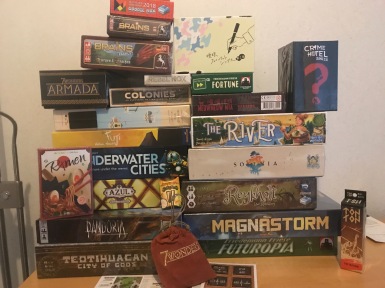 My Eseen haul through about 11:00am Thursday.

As with my past coverage, I’ll be posting each day about (1) what’s hot, (2) what I played, and (3) general thoughts on the convention.  I haven’t had the chance to play many games so far: I typically spend the first day shopping, then the next three days playing games.  So there’s only one mini review, but I’ve started on several more for tonight.

I always find it fun to follow the Fairplay and Geekbuzz lists.  The Fairplay list is less subject to manipulation to publishers, but it doesn’t provide much information early during the convention, and in fact, it provided no details today.  (They said they’ll release the initial list this morning.)  GeekBuzz doesn’t have many voters at this point, although the results so far this year are closely matching what I’m seeing on the ground.

Here are the top 20 or so games in the Geekbuzz list (in order of appearance):

Overall, I can’t really quibble with that list!  (There are a couple on the list that I don’t know anything about — namely Chronicles of Crime and Cerebria — but I’ll research them today.)  The Geekbuzz list is, at least to me, a pretty good representation of what is hot at the convention.  Based on my observations on the ground, I’d guess the hottest games are Teotihuacan and Azul: Stained Glass of Sintra, which I’ve been seeing everywhere in the halls.

Rumors are that Teotihuacan and Blackout Hong Kong are sold out, though I haven’t verified that with either publisher.

The only games I’d really add are Magnastorm, Pandoria, and Reykholt, all three of which seemed to be mentioned frequently in conversations yesterday.  I also saw them being carried around the halls quite a bit. 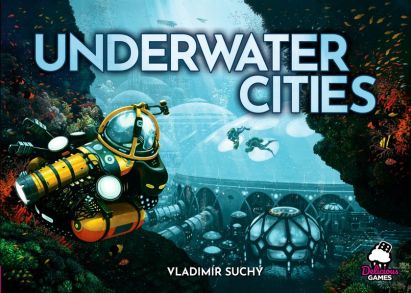 In Underwater Cities, a medium-heavy game from Vladimír Suchý and Delicious Games, players take on the role of scientists “nominated due to the overpopulation of Earth to establish the best and most livable underwater areas possible.”

The main mechanic is reminiscent of worker placement: there are several spaces on the board, and on your turn, you play a card down in front of you and put one of your tiles on one of those spaces, making it unavailable for the rest of the round.  Some spaces give resources, others allow you to build structures, others allow you to get cards that help with scoring, and so on.  If the card you played matches the color of the space you used, you also get to use the power of the card.  Your cards can give you resources, permanent effects, or even additional actions, making for a bit of an engine-building aspect.  The main mechanic is quite simple, yet the game is, at first glance, decently deep.

This is sure to be one of the hits of Essen 2018.  The card play— you’re choosing which projects to pursue, and building a tableau — is reminiscent of Terraforming Mars, but selecting the action spaces on the board is reminiscent of a worker placement game.  Mixing those two mechanics is brilliant, and the table I played with was enthusiastic about the game.  This is surely one of the games to watch!

Happenings around the halls, and my purchases…

As I’ve said before, despite being a group that writes back and forth most days, the Opinionated Gamers rarely meet in person, in part because we live on four different continents.  Even those of us that live on the same continent are spread out.  But a few of us came across each other at the Zoch media event on Wednesday, and this is one of my favorite photos of the convention.

I posted my morning haul at the top of the post, but here it is again: 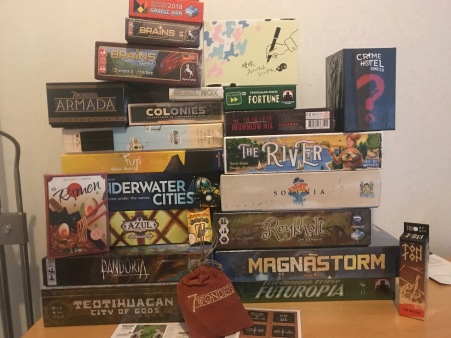 My Essen haul through about 11:00am Thursday.

And here are the afternoon additions: 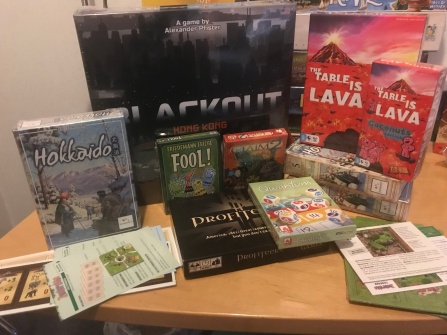 I’m about 90% of the way done with my shopping, so there won’t be much more than this!