Dale Yu: Review of The Fuzzies 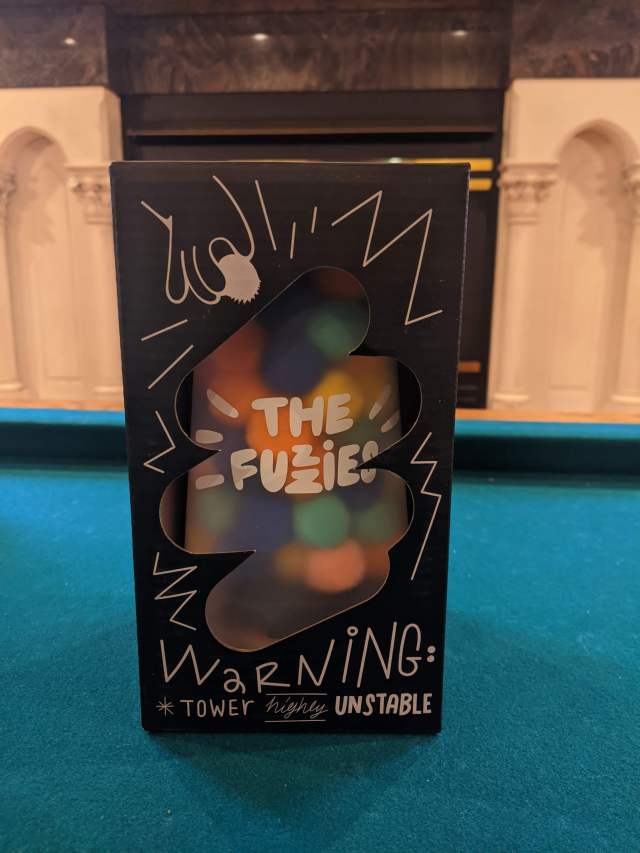 The Fuzzies is the newest release from the design team that brought us Wavelength – but this game is totally different in feel.  Whereas Wavelength challenged players to exercise their brains to come up with great clues and try to figure out how your opponents are thinking… the Fuzzies is a dexterity game, where you try to skillfully remove and replace fuzzy balls from their tower.

The game comes in a 24oz plastic tumbler – the sort of cup you might get at a fair or a baseball game. it’s filled with 100 fuzzy balls of five different colors (navy, orange, teal, pink and yellow).  All of the balls fit nicely into the cup, and there is a lid on top which holds the rules and the 30 action cards.

To play the game, you remove the lid, slam the cup down on the table and carefully lift it up, leaving a cup shaped pile of fuzzies on the table.

Trust me, it looks precarious, and it is!

Then, the first player has to remove a Fuzzy from the tower which is the same color as the top card on the deck. Then, you must replace this Fuzzy anywhere on the tower that is higher than where it started. You could put it all the way on top, but you don’t have to!

The game includes a set of tweezers that you can use, or you can trust your own fingers. You must stay in your seat during the whole game; so you pretty much can only use the side of the tower that you can see. Though, if you’re careful, you might be able to spin the whole tower around on the base so that you can see a different side of it. Be careful though, you might knock the tower over!

If nothing falls to the table, your turn is over! If one (or a few balls) falls, then you must draw cards from the deck (max of 3) and flip them over; these will have challenges on them that will make your next turn harder – maybe you have to cover one eye, or you are forced to use certain fingers…

The game ends once someone causes the tower to topple – the rules say that this is anytime 10 or more balls fall off the tower. That person loses! Then it’s time to pack the cup with the Fuzzies to set up the next game!

The game is quick and fun. The challenge cards certainly make things a bit more difficult, but for a few of us, just the basic game was hard enough… The amount of stickiness that the Fuzzies have is pretty amazing. sometimes, you can make a ball stick to another one just by touching them together. This, of course, makes it super likely that the next person will dislodge it as the touch the tower.

If you’re looking for another party game, this is a great choice. Anyone can play it, and it’s always good for a laugh. It’s not too serious, and it’s a lot easier to set up then Jenga. Quieter too!

It has already funded on kickstarter- you can learn more about it here: https://www.kickstarter.com/projects/alxhague/the-fuzzies

It should also be available through regular channels very soon!

This design team seems to be trying to corner the market on party games, and each of their previous designs has gone in a different direction. I can’t wait to see what they have up their sleeve next.