In August, I was fortunate enough to attend the Gathering of Friends in Niagara Falls. Fortunate in that someone wanted to invite me, fortunate in that invite being accepted and most fortunate that my wife said go for it, and took care of the entirety of the first week of school without me helping with getting the kids motivated for waking up for school and kept everything up and running at home. What that means to you dear reader is that I actually got the opportunity to play a variety of games for the first time in a long while. I met lots of great people, including some from this very website, and I played some games along with a lot of Werewolf (I differentiated games and Werewolf just for you Dale). The first couple days I was there, I basically dedicated myself to Descent Legends of the Dark, which I think I am going to write about soon as well and kind of do a review of it like I did with Gloomhaven Jaws of the Lion. Here are three games that stood out to me at this Gathering, a couple new, and one “old”.

Khora: Rise of an Empire Everyone wants to make a Civ-lite or a city building game that plays in about 60-90 minutes and has easy to digest rules but still packs a punch. In steps Iello and a group of designers that may have cracked that code. In Khora, you are a leader of a city in ancient Greece, trying to help your city grow to be the most cultured, prosperous and strong city in all of Greece. Using a unique combination of dice allocation and action selection, your city grows. Actions are numbered from zero to six, and on a turn you can take as many actions as you have dice, at the start that is two, but later on that can be three. You then assign dice to each action you chose, the dice are rolled prior to choosing actions. If you use a die that is higher than the number on the action, you are fine and just take the action. If you use a die that is lower than the number on the action, you lose population equal to the difference. Most of this is all done simultaneously, with Military being the only one that should possibly be done in turn order. The game ends after nine rounds. It’s an interesting system, and there is a sprinkling of tech tree building to go along with all of this. Wrap it all up in that typical Iello art and I think this may be a solid hit for them, even if it is a bit of a departure from their usual fare, I mean this clearly says “Expert” on the box. I only played this one time, with two players, but I am anxious to see the reception that Khora receives, especially if they actually get to release this one in what is going to be a very sparse Gen Con. Then I am excited to actually get to play it again. 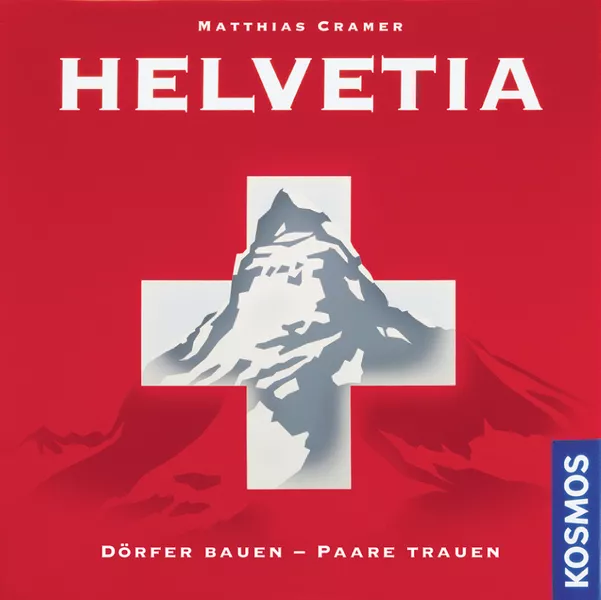 I know, this one is an old one, and one that has kind of fallen by the wayside. I remember when it came out and was really difficult to get your hands on, still kind of is, although I have heard rumblings of a reprint, but who knows at this point. Point being, it was always on my list of games I wanted to play, I mean who wouldn’t want to play the greatest game made about a typeface. Anyway, Helvetia is really a game about building your village through using worker placement. Each player has discs to place to take actions and workers spread out around their village and even neighboring villages in order to gather goods Helvetia is a race to twenty points, you gain points various ways, building buildings in your village, selling goods that you produce and by having majorities in the actions. So scores are fluid and will change from round to round, all building to that climactic end where everyone is hopefully about to cross the twenty point threshold around the same time. There are marriages, babies (that are immediately put to work, which is a bit weird, but whatever) and interactivity throughout. It really was a wonderful experience, and I hope the rumors I have heard turn out to be true. 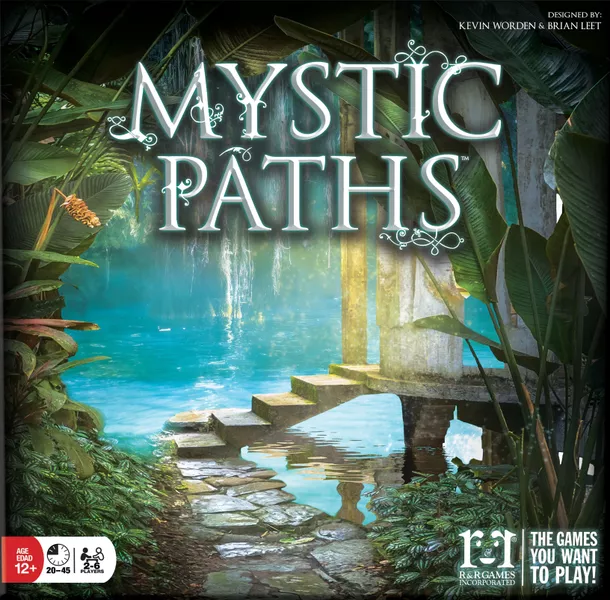 Mystic Paths, where to start. Well first and foremost, in spite of how this looks, with the fantasy art and theme, and even miniatures, this is a cooperative deductive word game. In Mystic Paths, the board has a pattern of different words laid out on it. Each player is then dealt a personal card that shows a path that you need to follow. But to follow it you have to give clues that will lead your fellow travelers to choose the correct path for you. To do so, everyone is given a hand of cards with words on them, you need to choose something that will lead your teammates to choose the correct word on the board for where your path is going. There are some tokens to make sure that your teammates know that you are meaning that the clue is NOT what it says. Like if you are trying to lead them to a tile that has something hot on it, and all you have is a card that says Cold or Chilly, you simply place that token on there to show that it is not Cold or Chilly. Each path per player is ten words long and you play it in sections. In our game we tried to do three tiles per player each turn. It is difficult, it is fun and it’s kind of original. Yes, it will have the feeling of a lot of different word deduction games, but mix it with some weird theming, a board and actual pieces moving and I think that you have something that feels entirely new and somewhat unique. I’m sure others will think differently, but they are wrong. /wink

All in all, I had a wonderful Gathering of Friends. I met a lot of folks and only played one game that I’ll be happy to never play again (Terraforming Mars Ares Expedition). Most importantly what the Gathering helped me do was rejuvenate a lot of my desire to actually play games. For the most part, as you could probably tell from my lack of contributions here, I had basically given up on looking for games, for pushing to play games. I had kind of thought that board gaming was going to become something that was a background hobby, surpassed by other things, but I think the pull is still there. Now the question becomes, can I convince others around me that the spark is still alive as well.

Larry:  I’m a big fan of Matthias Cramer and Helvetia is another of his fine designs.  It never made much of a splash, possibly because Kosmos, in another one of their baffling moves, never released it in anything but the German edition.  But I’ve really enjoyed my plays of it, largely because, at the time it came out, it really didn’t feel like any other game.  Much of this is due to the intricate production chains and virtual goods; in a way, this kind of anticipated some of Alexander Pfister’s later games.  The need for marrying your workers off, both to gain access to an opponent’s building and to add working class children to your population, is another unique mechanism.  My only problem with the game is that what your opponents are doing in their displays is so important to you that I would routinely have to get out of my chair and stand behind them, so I could see what they had going on.  But if that is the price of a truly interactive game, then I guess I’m willing to pay it.  It would be great if the rumors of a reprint turn out to be true, because this game really needs to be better known.

Dan: I didn’t get to play Khora (and I am not a fan of Helvetia, although it’s fine), but I did play and enjoy Mystic Paths. While it will certainly remind you of other cooperative limited-clue games such as Just One and Cross Clues, the use of cards to provide clues and the paths of words do make this game feel different. (The theme is neither here nor there in my opinion – it doesn’t feel like a fantasy game.)

Erik: I agree with Brandon and Dan about Mystic Paths, perhaps even more strongly. I think it’s a fantastic game. I’ve been looking forward to the final version since playing a prototype in April 2019 and I think the (yes, weird) theme helps bring the game to life. Lots of fun!

Chris:  Khora is, after one play, an excellent entry in the crowded genre of medium civilization building games.  This doesn’t have some of the typical hallmarks of the theme — there are no characters on a map, for instance — but it certainly has a light tech tree and some clever in-game combinations.

Helvetia was a blast. I think it is one of the better Matthias Kramer games.  The redo is rumored to be “Poor Man’s Best Country,” though details appear to be sparse.

Mystic Paths was fun.  But I do think it feels a lot like other word-based deduction games.  And the theme is a hot mess.  (Seeing the box, I thought it had some relation to Mystic Vale.) But it is fun, and I could see it being a hit.