We’re going to continue our look at some of the upcoming games though the rulebook.  I’m always interested in what Ystari has to offer at Essen.  They have usually produced games that have been in my gaming roundhouse, and this year, the new game definitely looks to be in that same category. 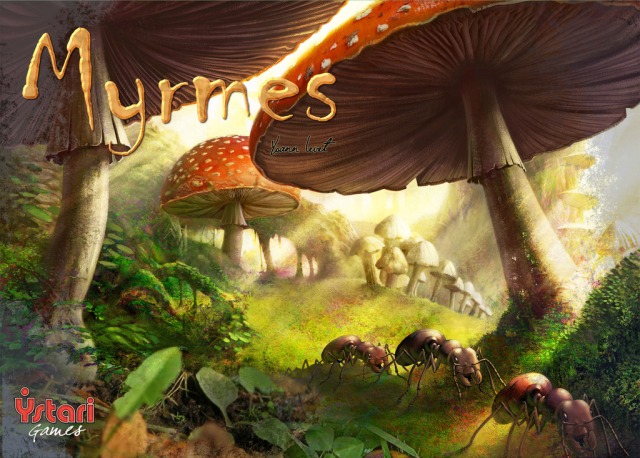 In Myrmes, players each control their own ant colony, and, over the 3 years of the game, they try to have the most dominant ant colony (evidenced by having the most victory points).  The gameplay is split amongst two different areas – an individual player board where the player can work on developing his own colony and the main board which represents the outside world – here the ants interact with each other and hunt prey.

On your individual board, you have different rooms where you make/keep different sorts of ants: larvae, nurses, soldiers, workers.  There is also a space ants to work and space to keep the resources that your ants make. Finally, there is track which shows the complexity of your ant colony – the further along you are on the track, the more resources your ants will be able to make and the more choices they will have when they venture outside your colony.

The main board has a land area, split apart by a hex grid.  There are a couple of different terrain types on the map.  Additionally, there are some spaces where prey tiles will be located – these can be hunted down by your ants for victory points.  Ants will be able to place pheromone tiles down on this hex map as well for VPs.  On this board, there are also spaces for objective tiles – tiles which can be completed for victory points.

In setup, each player gets their personal colony board, 3 nurses, 2 workers and 1 larvae.  The season dice are rolled, and players can see the numbers.  The number on the die corresponds to an event – which can be seen in the lower left of your personal board.   On the main board, the initial tunnel openings are placed on the map as well as the starting prey tokens.

So, the game takes place over 3 years, or rounds, each split up into 4 seasons.  The first three seasons are regular rounds and the last season (Winter) is really just a maintenance phase.  In each of the action rounds, there are 6 phases that are followed:

1) Event – In this phase, each player can choose to modify the event – you can discard one of your larvae to move the event marker one space to the left or right.  You can do this as many times as you want until you get to the desired event for your ant colony that season.  There are 8 different events – they will allow you to give birth to extra ants of a certain type, have better movement ability on the main map, score more victory points, increase the complexity of their colony, etc.  Whichever event you choose will be in effect for the rest of this season. 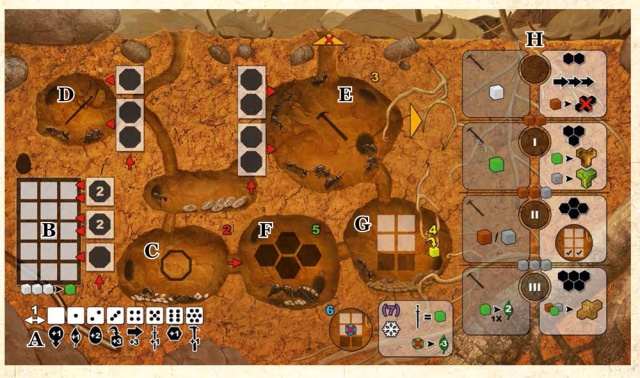 This is your personal ant colony board. The events are seen in the bottom left corner here

3) Workers – going in clockwise order from the start player, each player takes turns to make one of his workers do something.  The worker can stay within the ant colony and do something.  The chart at the right of the personal board (see above) shows the possible actions – at each level of complexity, one ant may work each season.  The ant is placed on the box on the left side and the corresponding cube(s) is made.At the most complex level, the worker ant feeds the Queen and is rewarded with 2 Victory points.

The worker can also go outside and do something: hunt prey, place a pheromone tile, place a special tile or clean up an exhausted pheromone tile. Regardless of what this worker ant does, it is discarded afterwards – this ant will never return to the colony (sniff, sniff)…  The ant emerges from any of the anthills of its color and then has 3 movement points to explore the area.  If it encounters its own color pheromone tile, it can cross the whole thing for 1 movement point.  It can cross opposing pheromone tiles, but only if the player sacrifices a soldier ant from his individual board.

If the worker ant comes across a prey tile, it can notify its soldier bretheren to come take care of it, and then depending on the prey type, different things happen including getting resource cubes and/or scoring victory points.

The worker could choose to place a pheromone tile – the size of which is dependent on the complexity of the ant colony.  It cannot overlap another pheromone tile nor can it cover water.  When it is placed, cubes are placed on top of it corresponding to the hexes that were covered.  Victory points are scored for placing larger pheromone tiles (0, 2, 4 or 6 VPs for level 1,2,3 or 4)

The worker ant could also clear a pheromone tile.  As I mentioned earlier, when you place a pheromone tile, you place cubes on top of it.  If that tile has been emptied of the cubes, that empty pheromone tile can be discarded.  If there were any VPs on this tile, they would be scored by the player who cleared it off the board.  After the tile is removed, the ant can resume its movement and still take one of the other actions.

The worker could also place a special tile. Different resource cubes are needed to place the different types of special tiles.  They give their rewards in the Harvest phase.

Two of the special tiles

4) Harvest – In this phase, each player must pick up one cube from each of their pheromone tiles. Additionally, each special tile provides something to the player as well.

5) Atelier – Any nurses that were placed in the Atelier room in the colony are now moved to the main board.  There are four possible different actions in this phase, and each player can place one ant in each area.  You could increase the complexity of your ant colony.  You could add a new anthill tunnel entrance somewhere on the main board map.  You could score one of the objective tiles on the board.  Finally, you can make a new nurse tile – which will be usable from the start of the next season and will thus give you one extra worker/atelier every turn thereafter.

Scoring objective tiles appears to be the way to score the most VPs in the game.  There are 3 levels of objectives, with 2 options at each level.  You must first score a level 1 objective before you score a level 2 objective, etc.  Generally, to score an objective, you need to discard the things pictured on the tile.  You score 6 VPs for each level 1 objective, 9 VPs for level 2, and 12 VPs for level 3.  In addition, there is a bonus for completing them early – anytime someone scored an objective that you’ve already finished, you get a 3VP bonus.

6) Clean-up – At the end of the season, you keep your limit of cubes (4 or 6 depending on colony complexity).  All of the workers and nurses within the colony are recovered.  The first player marker moves one position to the left. Finally, you look at the event die for the upcoming season and move your event marker on your personal board to the corresponding spot. Unless it’s the end of Fall, because there is no die for Winter.

6b) Winter – If it’s Winter-time, you move into a special upkeep season.  In year 1, you must discard 4 food cubes. In year 2, discard 5 food cubes, and in year 3, get rid of 6 food cubes.  If you have soldiers in your colony though, each soldier present reduces your cube requirement by one.  For each cube you are short, you lose 3 VPs.  After the food has been discarded, re-roll the season dice to get ready for the next year.

Scoring – after the end of the third year, the game ends.  The player who has the most victory points at that time wins the game.  There are no end-game bonuses for victory points.  To recap, you score VPs during the course of play by 1) placing pheromone tiles (0-6 VPs), 2) hunting prey (0-4 VP), 3) feeding the Queen (2 VP), and 4) finishing Objective tiles (6,9 or 12 VP + 3VP bonuses).

Dale:  Well, after reading the rules, I’m very interested in this one.  I tend to like games where you have your own space to develop your own stuff – though this one is not a complete sandbox game as you will eventually have to get ants from your colony out onto the main board.  Yet, I like games that give me this room to nurture things on my own.  Also, there aren’t many games out there with an ant theme, so this will definitely fill that niche in my collection.

One thing I can’t quite tell yet is what the range of scores would be in a normal game.  There are only 4 ways to score points.  I’m guessing that scores will be low in the 30-40 range.    In addition, this makes the -3 VP/food token short in Winter a big obstacle to avoid.  I also like the way that the objective tiles force you to either discard things or give up progress that you’ve already made.  This should make the games tight because there is this built-in catch up mechanism in the game.

I’m expecting the game to feel a bit like Agricola in that there will be a constant battle for collection of resources and food with a limited amount of actions available in each year.  How many actions will you have to devote to getting resources, etc – and how many can you put in the Atelier area to take the special actions that will help your colony grow for the long haul?  Also, based on the size of the map in the rules, it looks like there will be a constant battle for space aboveground.

Cyril and Ystari are one of my first stops each year at Essen, and over the past few years, playing the new Ystari game on Wednesday or Thursday night has become one of my Essen traditions.  I am looking forward to this next game in the Ystari line.