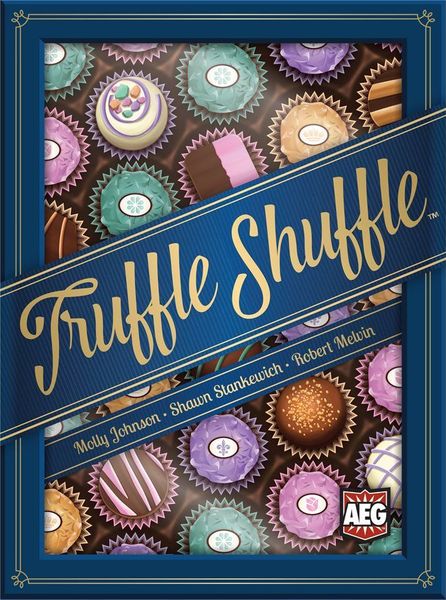 In Truffle Shuffle, players compete with each other to make the most valuable collections of chocolates to sell.  The players will draft cards from a smooshed pyramid of cards.  The top of the pyramid is 4 cards (all faceup) covered by the row below having one more card but face down, and continuing onward until there are 9 face down cards at the bottom.  Some bonus coins are put at the bottom, the number of which is based on player count.

On your turn, you take a single action. Most of the time, the action is to take an available card from the tableau and add it to your hand.  You can only take cards which are not covered up by other cards.  Your hand size is only limited at the end of a round, at which time you can have as many cards as there are players in the game.

After you take cards on your turn, you have the option to fulfill an order.  Your helpful player reference card lists all the possible combinations that work as well as the payout for those combinations.

One of each color

You may need to use some of the special cards that you can collect to generate a higher priced set – some of these cards will allow you to change the number or color of a card, others are simply wild cards.  The first few orders filled each round, that are at least 4 truffles in size, come with some bonus coins – these were set aside at the start of the round. 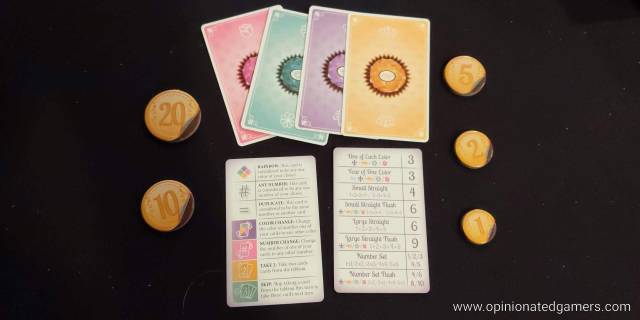 The round continues until the final card is drawn from the tableau.  The player who drew the last card takes their usual turn, and then, players must discard cards from their hand until they have the same number as the number of players in the game.  Build another tableau from the deck and play another round.  Do it all again and play a third round.  You’ll know you’ve done it right because there should be exactly enough cards for three semi-pyramids.  At the end of the third round, you should NOT discard any cards though.  The winner will be the player with the most money, and ties go to the player who has the most cards left over in their hand.

Truffle Shuffle is an enjoyable light game that moves a lot faster than I expected it to.  In my minds eye, when I read the rules and looked at the pyramid of cards, I thought that three rounds would take forever.  However, in a 3p game, each player only gets an average of 13 cards per round; only about 10 cards per round in a 4p game.  Since many melds take 4 or more cards (even more if you are using the specials to change numbers/colors, etc), there isn’t as much scoring as I expected!

I have tried different strategies as far as which scoring combinations to focus on – I have found that my personal favorite is the number pair flush (usually pairs/trips), but the large straight seems to work well also, so long as you can find the elusive 1’s…  There is a nice tension caused by the bonus chips.  Oftentimes, you’ll want to wait until the end of a round in order to maximize your scoring by getting a flush combination -as these always pay out better than the unsuited versions.  However, it takes a bit more time, effort, and often special cards to get those to work.  The extra 2 or 1 point bonus is often enough to make you want to play a meld earlier as it lets you focus on your next scoring opportunity – while nearly scoring the same amount of points.

Once the bonuses are gone, you have a bit of time to find the right card, but don’t wait too long!  You need to make sure that you’ve played everything you want when the round ends.  I have been burned on a few occasions by a “Draw 2” and a “skip 3” coming into play, and having the round end one turn before I was ready for it to end… and I was forced to discard a scoring meld to get back to the hand limit.

The choices each turn are pretty limited (in a good way), and this keeps the game moving along quickly. You can see your card drawing options, and the biggest sort of deliberation that I end up with is trying to figure out which facedown color I want to draw – I might want a particular color to hopefully match up with other cards I already have, or I might be trying to draw a specific special card – and the player aid helpfully reminds you which cards come in which colors.  In our group, there is a big preference to drawing the Skip 3 cards, so most of the facedown green cards are taken when they are available.  The Skip 3 cards end up giving you one extra card draw as well as the ability to clear out a pair of facedown cards to free up a much needed visible card – if you happen to be targeting one specific card – for that reason, we all found this special card to be quite powerful.

The components are decent, but I will admit that my tiny hands have a hard time shuffling 117 small cards.  The scoring coins are functional, though you’ll have to color up from time to time as there aren’t an abundance of these tokens.  For my promo set, the game did come with a most excellent set of a dozen Ferrero Roche truffles, and we did enjoy eating the truffles as we played a game about truffles.  Kudos to the AEG staff for making game night a little bit sweeter.   The player aid cards nicely summarize the scoring possibilities as well as breakdown of the special cards and the color on the backs of those cards. 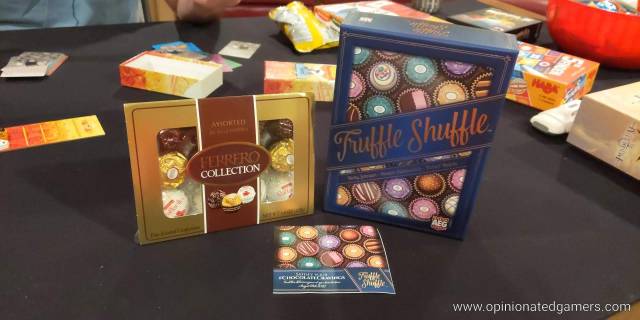 Interestingly, the rules don’t give you a manifest of cards, and the breakdown of card numbers is important to know.  For me, the salient bits are – in each of the four colors, there are N+1 cards for the ranks 1 thru 5. (Two “1” cards, six “5” cards, etc).  This is really helpful to know when you’re trying to work out the probabilities of completing a set.

Truffle Shuffle is a nice light set collection game.  It looks good on the table, and it gives you enough decisions to make each round to keep your brain occupied working out all the different possible scoring opportunities.  It was a sweet ending to our night of gaming, and I can see this game filling that role for awhile.  (We’ll have to see if we regularly eat chocolates with each game or not!)

Greg S:  Excerpts from my full review on Gamer’s Alliance.

The big tension in Truffle Shuffle is whether to try to assemble large, valuable sets, which earn more coins, or go for an abundance of easier, although less lucrative sets.  With two players, each player has well over a dozen selections from the tableau, giving them time to assemble larger sets.  With three or four players, the number of selections each player gets each round is more limited, making assembling larger sets more difficult.  So, going for the easier-to-assemble sets may be a more viable approach.

My wife and I have played numerous times and have found the game to be enjoyable.  She is predisposed to enjoy games based on familiar card game mechanisms, so the Rummy and Solitaire aspects appealed to her.  She also enjoys games that are easy to learn and play, not encumbered by a proliferation of rules or seemingly unlimited decisions.  She fits perfectly into the “family” and “casual” gamer classifications, the market that will undoubtedly find this title to be most appealing.  As an admittedly more hardcore gamer, I, too, find the game to be entertaining.  It is the type of game you can bring to the table when you have a bit of time and don’t want something taxing.  It is light, fun and enjoyable