Jennifer Geske: BGG.CON 2011 – Behind the Scenes

While Essen is where the boardgaming industry introduces many of the new games for the next year, BGG.CON is where many non-Europeans in the community get to play those games. I usually try to get to BGG.CON at least one day in advance to get the lay of the land, catch up with friends I haven’t seen in months and get a little bit of pre-con gaming in before the serious gaming starts. This year I arrived early Tuesday afternoon, and at 2 p.m. there were already a few tables of gamers in the breakfast area playing games they have brought with them. The ballroom/conference center area was a hotbed of activities, with hotel staff, convention organizers, and many volunteers working to set up the variousrooms that will be packed with gamers starting on Wednesday.

I dropped off my copy of the 2-F games (Power Grid: First Sparks, Power Grid: Robot, and Friday) for the BGG library and spent the next few hours help setting up games in the Hot Games Room. As I have already played most games that are in the Hot Games room, I have volunteered to teach games there this year. The intention is for some high-demand/low-supply new Essen games to be set up in the room so groups of gamers can be rotated through session within a couple of hours. Some popular games may not be on the list as they may be available for purchase from vendors so there’ll be plenty of copies. Here’s a list of the games that are currently set up in the room:

I also checked out the Funagin Store, where Nick Medinger was busy pulling together pre-orders and setting up the rest of the store with the Funagain Essen loot. If you are interested in a copy of Ab in die Tonne and did not pre-order, you should go to the store first thing Wednesday morning (10 a.m.) as there were only 3 copies left when I was in the room. 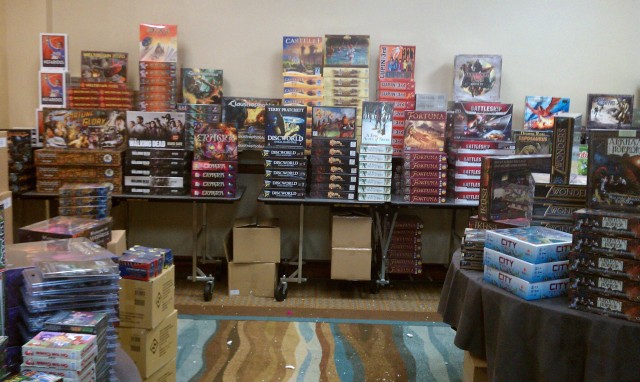 I only got in a little bit of pre-con gaming on Tuesday because I had to call in to a board meeting in the evening. I played Pala with Ted Alspach, Toni Alspach and Jeremiah Lee. It’s a fun trick-taking card game. Even though I did not understand that you are supposed to avoid points until 2/3 of the way through the first round, I managed to do pretty well. Later in the evening, I also played a couple games of A Fistful of Penguins, another new Essen release designed by an OG contributor. It’s a light dice game with cute components and plays in 10-15 minutes. I also watched most of a session of Giza: The Great Pyramid, an upcoming Mayfair release designed by my friend Dave Heberer. I took some photos to show Dave that the game actually exists. By about 9 p.m. on Tuesday, there were at least 100 gamers playing games in various conference rooms at the hotel, and there was a late-night Werewolf session as well. I spent most of the late evening (ended up going to bed around 4:30 a.m. after being awake for more than 27 hours straight) chatting with friends. However, I did manage to scope out the library earlier in the afternoon so I know what games I want to play (mostly the ones that I don’t own – I still have about 30 new Essen games that I own but have not yet played):

I am usually the person walking around the floor with a new game checked out and can’t find anyone who is interested in playing them. So if you are interested in any of the games I listed, let me know and we can actually get the games on my list played. I also plan to check out the vendor booths and the Proto Alley to play some prototypes. Now it’s time to go check out the registration line…

8 Responses to Jennifer Geske: BGG.CON 2011 – Behind the Scenes