I really, really wanted to make this a top ten list… but then, thanks to the magic of Christmas, I had to add one more. So, I used my board game blogging superpowers to smoosh two of the games into one entry. (Next, I’ll leap a tall building in a single bound in order to stop an argument between rules lawyers… I have promised to use my powers for good.)

You’ll notice that there’s a BUNCH of sci-fi/fantasy games on here… it’s been a really great year for those of you who like that kind of thing.

I am so glad I own both of these games… and yet, they just don’t get to the table as much as I want. In fact, after an initial flurry of play when I first received Fleet Captains, it hasn’t made it’s way out again. Battleship: Galaxies has seen more sustained play, but pretty much just because my 10 year old son loves it.

While they both share the whole sci-fi/space vibe, they’re very different games. Fleet Captains is an immersive Klingon vs Federation adventure in the Star Trek universe. (In my review here on the Opinionated Gamers, I called it “an experience game” and dubbed it “Dungeonquest in Space”.) Battleship: Galaxies, on the other hand, is a starship combat game that utilizes energy points to limit how many ships and/or action cards you can power each turn.

At the same time, they have some similarities: they both look great when they’re set up… and both take a lot of time to get set up. (Both games have some pretty serious deck-building decisions front-loaded during game prep… which makes both games tougher to teach than they are to play.) Both games have a detailed mythos that adds to the flavor… and both are lacking something.

I acknowledge that Quarriors has problems (tiny dice that are sometimes hard to read, for example)… and that it’s especially prone to slow to a crawl with gamers who want to min-max their probabilities. That said, I’ve had a blast every time I’ve played it with my son… it’s fast, it’s funny, there’s a lot of interesting things to do, you get to cheer and/or boo your dice rolls, and I find myself smiling when I play.

The new game to compare this to is probably King of Tokyo – which I also enjoyed but felt like I was much more at the mercy of the dice & the foibles of the other players. So, though it made me laugh as well, I’d pick Quarriors.

8. The Struggle for Catan

I was worried that this would be the card game equivalent of the Catan Dice Game… that it would have the thematic trappings without any of the fun of the (still wonderful) original Settlers of Catan. Thankfully, I was wrong.

It’s not a deep game, mind you – it’s a filler card game that romps along at a nice clip, with a nice mix of “take that”, hoarding resources & a few special ability buildings thrown in for good measure. 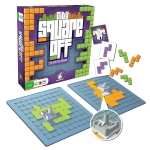 Do not let the fact that I’ve been friends with the designer (Ted Cheatham) for over 12 years keep you from trying this lovely two-player Tetris-y game. It’s a quick filler that everyone from my six-year-old to my mom has enjoyed.

And the most important point for many who read the website is what I said in my review: “My non-gamer wife voluntarily taught the game to one of her friends.”

6. The Rivals for Catan

I want to put this higher up on the list – I’m a long-time fan of the original game & (as I said in my Opinionated Gamers review) I think the new version improves on an already tremendous game. The problem with ranking it higher is, well, opportunities to play the game. I’ve got a couple of folks who are willing to sit down for 60-90 minutes of building our kingdoms… but more recent advances in “card game technology” make it harder & harder for that to happen.

I will say that the recently released expansion, Age of Darkness, adds some really nifty twists with buildings you can put in your opponent’s kingdom & cards that are tied to regions rather than settlements/cities.

And, yes, this is the first of three games on this list that was actually published in 2010… but I didn’t play until 2011.

This new-to-me game barely made it onto the list – I only received my copy of the game a couple of days after Christmas – but I am utterly taken with this extremely random & wholly tactical civilization building card game.

That’s right, I said it: if the cards don’t fall right for you, you can be in serious trouble. But, since a 2 player game of Innovation only takes about 30 minutes, I don’t find that to be as frustrating as some other folks do. In fact, I’m willing to trade the swing-y randomness of the game for the multitude of card powers & combos… and with that plethora of options, the ability to create some truly awesome plays.

One quality of a great game, by the way, is as follows: “A great game gives players the opportunity to make moves/plays that they can delight in… even if those moves/plays don’t win them the game.” (I’m quoting myself… which is the last step before falling into the Bob Dole-ish morass of 3rd person self-referential.) Innovation is stuffed to the gills with those kind of opportunities.

I’ve played one game with the expansion, Echoes of the Past, and I think I need to back up & play with the base game a little more. There’s nothing wrong with it – I like the concepts of Echo & Foreshadow – but there’s so much to track that I found it easy to get lost.

I feel the need to say one negative thing… the special achievement cards have a horrible choice for a background that renders them unreadable across the table.

I’m a sad, sad example of a computer gamer… the last RTS game I played was Warcraft II. I didn’t even manage to purchase the original Starcraft… which is the basis for this fantastic battle card game.

Like Summoner Wars (which we’ll get to in a minute), each faction has a distinctive feel & play style… but unlike Summoner Wars, the differences are so pronounced that each faction in The Ares Project has it’s own mini-rulebook. They produce & use power in different ways, have different units, modify those units with different kinds of cards… even create new units through various methods.

All of this complexity means you have a game with lots of variety… but you also have a game that’s difficult to teach. One of my hopes for 2012 is getting a core group of players “up to speed” so we can knock out battles in short order. 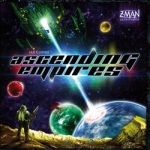 I’m just going to quote myself (from an Opinionated Gamers review) again:

Ascending Empires has been described by many people (including myself) as a weird & wonderful cross between a dexterity game like Carabande or Catacombs and a space civilization game like Twilight Imperium or Starcraft: the Board Game. There’s two problems with that description:

And with that said, I want to recommend that you try this game. Right now, if possible.

Summoner Wars was a “hey, I got an Amazon gift card & I don’t want to spend it on mp3 downloads” post-Christmas purchase last year… well, at least the first two boxes were. Then I went kinda nuts… and a year later, I own everything Plaid Hat Games has published for Summoner Wars.

Which would be kind of stupid if I only played it a couple of times a year (sigh – reference me & my three Plano boxes filled with Battlelore figures)… but I managed to get in 40+ games of Summoner Wars in 2011. I wouldn’t be surprised to get that many games in again in 2012.

In my OG review of the Master Set, I described Summoner Wars as “a fantasy battle board game that involves positional board play, deck & hand management, and dice combat.” What got left out of that description was just how much fun it is to play. There’s a healthy helping of randomness to spice up the game, but there’s also some real skill in playing each faction well… and Colby Dauch (the designer) deserves a mountain of praise for getting such variety out of a simple & straightforward game system.

Even if you don’t like fantasy combat games, you should give this one a try.

I’m not sure how to extol the virtues of this wonderous Risk reboot without spoiling some of its well-hidden charms, but I’ll give it a shot.

Kudos to Rob Davaiu… it is hitting the table EVERY week at our gaming group with people clamoring to play.

And one last thought: even after we finish the 15 game “story arc” (and someone gets to name the world), I can see this board/set being my Risk variant of choice – both to enjoy the memories/history of battles past and because the various tweaks & modifications in this game are really, really nifty. (BTW, this comes from someone who has four other versions of Risk in his collection… yes, it’s that good.)

follower of Jesus, husband, father, pastor, boardgamer, writer, Legomaniac, Disneyphile, voted most likely to have the same Christmas wish list at age 44 as he did at age 14
View all posts by Mark "Fluff Daddy" Jackson →
This entry was posted in Best Of. Bookmark the permalink.