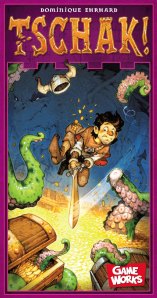 Decisions, Decisions
The first question I generally ask when evaluating a new card game is “can I do something interesting with a bad hand?”  If the answer is “yes”, I’m predisposed to liking the game.  And if the answer is “no”, then it usually has to work very hard to overcome that handicap.  Through passing, careful play, and a dash of luck it is possible to make a reasonable winner out of a jack high hand in Tichu, for instance.  In Mü, even with a bunch of crap you can try to become the vice chief, or perhaps make a run at chief with the help of a good partner and make your strengths trumps.  Or you can try to get points by helping to set the chief’s team.  Both of these are great cards games where you have a lot of options. I find games like them inherently more interesting than something like Old Men of the Forest, where low cards are strictly worse than high ones, and a lot of low cards mean things are that much more dire (not to pick on that game – the problem is rampant).  Card games naturally have high levels of luck, but I still don’t want the luck to play me; I want my choices to matter.

Pass the Dutchie
In Tschak!, a new game from Dominique Ehrhard (designer of the wonderful Marrakech), an attempt is made to mitigate the luck of the draw by ensuring that every player gets every hand as initially dealt exactly once each game.  Players get a hand of three wizards, three warriors, and three dwarf cards, and they use them to assault three levels of a castle filled with monsters and treasure.  At each level of the castle the players form a team of good guy cards, with the highest valued team taking the treasure and the lowest being saddled with the monster.  On the first level players send out one member of the team at a time and then reveal it.  In doing so, players can adapt their strengths of the second and third cards to what others are doing.  On the next level players reveal one and then the final two cards together.  And on the last level players put all three cards out and then reveal them at the same time.  Because of one extra wild card that is seeded into everyone’s hand, the last card is sent to fight over some gold booty that’s laying around outside the castle.  Then the cards are gathered up, passed to the left, and a new hand is played with everyone’s neighbor’s cards.

This passing mechanism, ripped from the pages of games like Zum Kuckuck, would seem to be the ideal way to answer the question I posed above.  You don’t like your cards?  Neither will anyone else on the turn then have them.  And at some point, everyone will get the good hands to make as much hay as they can.  So what’s the lingering “but” that’s keeping Tschak! as merely an ok but not a great card game?  The most obvious problem, and the biggest complaint I hear, is that even though the hands are identical, the situations in which you get to play them are not.  The monsters and treasures have fairly divergent values, so having the good hand on a round where there are a couple of cursed treasures is a bit of a bummer.  In fact, which treasures and monsters come out when seems to dictate the the winner of the game to a large degree.  Suddenly, we’re back in random luck territory.

Good Luck
The next obvious question is, why don’t I hate the game?  For one thing, as was noted in Patrick Korner’s fun essay on luck in games, I have a higher tolerance for luck in a lighter and shorter game.  Tschak! comes in at about 20 to 30 minutes for experienced players, putting it squarely in the light filler category.  A fairly random outcome works well enough in that setting.  But it goes beyond mere tolerance.  There are interesting decisions to be made along the way.  After the first hand you will have seen the distribution of all the cards in play (after two hands in a two or three player game).  You should know, or at least have a rough feel for who has what.  So if you see someone go hard after a treasure, you can re-evaluate your plans to fight for it, keeping your strength back for another battle.  Or maybe you know you can beat everyone, as long as someone else plays a high enough wizard card for you to copy with your chameleon wizard.  Perhaps you and your main antagonist will both pull back, leaving you to fight for the other good stuff anyway. Most interestingly, there are times you will want to end up in the middle of the pack.  And just that quickly the game takes on a double think/second guessing aspect, which is something I like from time to time.  I don’t love that mechanism, and I don’t love this game.  But it’s unobjectionable and potentially a bit of fun, though not much more.

Ultimately, that is the problem with Tschak!  There’s very little to love about it.  The art is well done, but that won’t put the game on the table very often.  The game is there, but it doesn’t engage me or anyone I’ve played with beyond a few tactical considerations.  No one will think about what they would like to do differently the next time they play.  I doubt anyone will pass on the exciting memories of their previous plays to future generations.  The hand passing, while necessary to give it any reason to exist, only creates an illusion of fairness in the game.  Someone always complains about getting the crappy hand at the worst possible time.  And they’re right, because they’re probably going to lose through no fault of their own.  The winner, however, will have had to make a few correct choices to take advantage of her windfalls.  That’s a good start, but not enough.  Even in a filler I want a little more oomph than that.

Dale Yu: I liked the concept of the game, and I think the art is quite nice.  For me, the issue was the ridiculous tie-breaker rules which no one in my group could remember the rules for – mostly because it involved artwork.  For instance, if tied between wizards, tie goes to the one with the wand.

I mean -really. Would it have been hard to also include some sort of number or icon on the card to also designate the strength of the card.  After having to ask about 5 or 6 times in the first 5 or 6 hands as to the order of artwork tiebreakers, I just gave up.  With the way that cards are revealed in stages, it would be really helpful/important to know if your particular card was better or worse than one you see on the table.  Also, ties seem to come up a lot.  It was not a lot of fun to stop at each resolution stage to figure out which card was stronger from the rules.

The game itself was decent, but the hassle of the tiebreakers makes this less fun for me.

[Edit: Dale brings up a good point, though the first three levels of tie-breakers are fairly easy to remember: Wizard, wand, Warrior…and that’s usually enough.  What annoyed me most about that is trying to decipher what a wand is.  It wasn’t always obvious.  One guy has a stick on a loop of string hanging from his backpack.  Is that a wand?  I agree a number would have helped clarify things tremendously. – N]

Lorna: The cards are cute and the theme could be fun. I really wanted to like the game. I don’t mind some randomness and luck in card games, but well, I’d rather play 6 NIimmt or Kalimambo for fun factor in games with the same mechanism.

I love it!…
I like it…
Neutral… Nathan Beeler, Dale Yu
Not for me…Lorna

Nathan has decided never to grow up.
View all posts by nathanbeeler →
This entry was posted in Reviews. Bookmark the permalink.