I was looking forward to trying Maharani after reading the description and a quick flip through the rules. It sounded like it would hit the sweet spot with me – puzzle-y, good tile placement and it had a cool wheel in the middle of the board.

As usual, Queen’s production is top notch. The tiles are reasonably thick and the wheel is well made. It comes with nice meeples or workers as they are called int he game, and a large board. 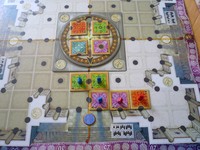 The goal is to score the most points while completing the mosaic of tiles.

The board is divided into quadrants. Each player has a side of the board in which orientation of the tiles on the wheel is coordinated. 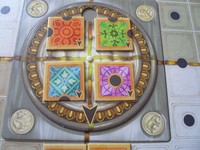 There are 6 colors of tiles. Each tile has an orienting arrow and a whole or partial column which limits the tile placement. Each player also gets 4 action markers which match the quadrants of the board. When a tile is placed from the wheel onto the board it may be placed in the same quadrant for free. To place a tile in a different quadrant from where it sits, it requires a player to flip the corresponding action marker to the used side. 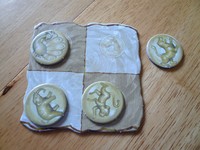 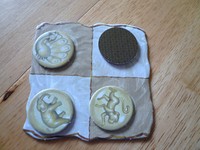 On a player’s turn they may do one of two actions. 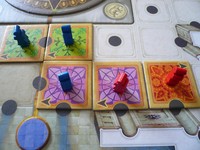 In addition, points are scored when a quadrant is completed (filled with tiles). Players score for the number of workers in the quadrant. 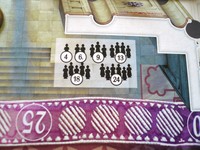 The game ends when the last quadrant has been scored.

Overall the game is pretty light in play. Luck in the game on tile draws approaches the limit of my tolerance. This seemed more obvious in the 4 player games. As usual a 4 player game leads to a lot more blocking and chaos before you get another turn. In the 2 player game, each player controls 2 colors and I found this more interesting as you have an options not only as whether to group tiles or meeples but also how to group your colors as each color scores for you individually.
To make it more challenging perhaps a variant to score the colors Tigris & Euphrates style where you use your lowest score would make the game more challenging. Some of the luck is mitigated by setting one’s self up for tile options and in a two player game you have more opportunity to make this happen. You also try to use opportunities to leech off of other player’s tiles while blocking their workers at the same time.
The game certainly has an Alhambra-ish feel to it in choosing tiles and grouping like tiles. I think it would play well for that audience.
As someone who typically enjoys heavier games I found Maharani a pleasant game with nice production qualities. I much preferred the 2 player version and I plan on trying the low score variant next time.

Jennifer Geske: I have only played Maharani as a 2-player game. I can see why it would be better than a 4-player game in terms of chaos, but the luck of the draw is still pretty high, and you are forced to block because no one else will do it for you. For example, there were times when the tiles were all bad for me (playable) but were good for my opponent, so my choices were to either punt and hope for better tiles or take a less desirable tile (that is the best for the opponent) to take it away from the opponent. However, the mechanic is interesting enough that I would be willing to play the game a few more times before pronouncing a rating. I am definitely interested in trying the low score variant.

Mary Prasad: I played this once with 4 players and probably won’t do that ever again. The luck of the tile draw combined with 3 players taking tiles before I could do anything was just plain frustrating. I might try the game again with 2 players. The production is beautiful and the wheel is a clever idea.

I love it!:
I like it:
Neutral: Lorna (leaning toward “I like it”), Jennifer Geske, Mary Prasad
Not for me: