What first attracted me to Hansa by designer Michael Schacht was the theme. Admittedly, I’m not well versed in the history of the Hanseatic League, but what I do know leads me to believe that the subject would make for an excellent game, one rich in trading, bartering, shipping and wealth-building.  I had hopes that Hansa would succeed where previous games attempting to recreate the rich flavor of the Hanseatic League have fallen short.  I did have some concern, however, as the game is designed by Michael Schacht.  Mind you, Herr Schacht is an accomplished designer and has created some very good games.  However, most are relatively abstract in nature and known for their brevity of rules and simplicity of mechanisms. They are certainly not bereft of strategy, but they generally do not offer sweeping treatments of their subject matter.

Well, Hansa is about what I should have expected from a Schacht game: concise rules, clever mechanics, interesting choices and short duration. It is a good game. Unfortunately, it, too, falls short of adequately dealing with the richness of the Hanseatic League, which is somewhat disappointing.  However, I fully realize that most games that are meant to have wide public appeal will likely not be highly detailed or intricate.

The board depicts the Baltic Sea and surrounding area, including nine major Hanseatic cities. These cities are connected by arrows depicting the sailing routes, which are generally one-way and cannot be traversed in the opposite direction.  The cities each produce goods, with five of the cities producing two types of goods.  Goods, however, are dealt with in an extremely abstract fashion.  There are six different colors of goods, but no attempt is made to describe the types of goods they represent or differentiate the values between the different types.  The good chips each picture from one to three barrels.  The more barrels depicted, the more valuable the good. 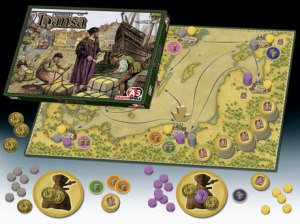 Before play begins, each city is filled with goods markers (either one or two per city), with the remaining markers being placed in five equal stacks.  Players place six of their market tokens onto the board, two each in three different cities.  The player controlling the most markets in a city receives the income when a player purchases a good there, and a player must have a market in a city in order to sell goods at that location. Thus, choosing which cities in which to place your initial markets is an important decision. Players receive an initial treasury of three Talers and begin their quest to become the richest merchant.

Phase 2: Replenish Goods Markers.  If there are any empty warehouse spaces, the player MAY opt to replenish these from the first available stack in the supply. The player pays 1 taler and must fill ALL of the empty markets. Warehouses are filled in numerical order, so the player really doesn’t have a choice as to which markers are placed in particular cities.

When choosing whether or not to refill warehouses, consideration must be given to not only how this will benefit you, but also if it will inordinately benefit your opponents.  Often, refilling will benefit them more than you.   This is the same type of consideration that is present when deciding on whether or not to select the Craftsman in Puerto Rico.

Phase 3: Actions.  Three different actions are available, and a player may perform none, some or all of these actions and perform them multiple times. However, he may only perform one action per city.

a) Move the Ship. The ship begins the game in Copenhagen and can be moved from city to city at a cost of 1 taler per city.  Movement is along the path of the directional arrows.  In order to perform any of the following actions in a city, the ship must be located at that city.

c) Setting up Markets.  A player may opt to establish markets where the ship is located.  To do so, he must surrender ONE previously acquired goods token. The number of markets he places is equal to the number of barrels depicted on the token.

This is a tricky decision, as goods are converted to victory points when sold.  Surrendering them to establish markets means they are no longer available to sell.  However, it is important to have a presence and, if possible, the majority of markets in as many cities as possible.

d) Sell Goods.  To sell goods, a player must have at least two goods markers of the same color. These are then inverted and are now “safe”.  The sale doesn’t garner any income, but it does convert those goods to victory points at the end of the game.

There are consequences to selling.  First, the active player must remove one of his markets from that city.  This can dramatically alter the majority status in a city, or completely eliminate the player’s presence in that city.  Second, all opponents must discard one goods marker of the same color. Harsh.

Victory points earned for selling goods are based on the number of barrels depicted on the markers.  A player earns 1 victory point plus one for each barrel depicted on a marker.  Thus, the ‘3 barrel’ goods are worth more than the ‘1 barrel’ markers.

Phase 4: Taxes and Tolls.  At the conclusion of a player’s turn, he may only be in possession of three talers and three unsold goods markers. Any excess must be discarded.

The decisions to be made in Hansa are interesting, although not terribly numerous or taxing. Still, there’s enough here to make the game worthwhile and entertaining.  It is important to note that it is possible for a player or players to move the ship in such a fashion as to severely limit an opponent’s options, or persistently place him in a disadvantaged position.  If this occurs often enough, the player may well be out of contention.  That certainly won’t sit well with that player.

Hansa is vintage Schacht.  It deals with a potentially rich and complex subject matter in a rather simplistic, abstract fashion.  He is a master of devising easy-to-understand mechanisms and rules, surrounding them with a game that has some interesting and often tough choices.  Hansa fits this modus operandi quite well, even though the theme is loosely connected.  The same can be said of many (if not most) European-style games.  Those seeking a detailed recreation of the Hanseatic League should look elsewhere.  Those seeking an interesting and entertaining game that plays in under an hour will likely enjoy this cursory examination of the League.

Jonathan Franklin:  I love numerous Michael Schacht games.  He is in my sweet spot in terms of the amount of play he fits into an hour.  Hansa and Web of Power are both thinky games that pack short turns with a ton of decisions into a time frame measured in minutes, not hours.

Hansa is not heavily thematic, so if you want dinosaurs and ninjas, look elsewhere. On the other hand, it has a map of a real part of the world with real cities and excellent art.

If there is a downside to Hansa,  it is that seating really matters.  If your RHO does not look out, she can set you up for the win, hence it must be played defensively.  If people are of equal levels and are looking ahead, it is super.  If not, it should be taken more lightly and hence will play faster.  I prefer Web of Power to Hansa solely due to the luck of the goods replenishment in Hansa, but would be happy to play either one any time.

Rick Thornquist:  I agree with Greg, Hansa is vintage Schacht – simple yet strategic.  I think it’s a good one, and somewhat overlooked.  It does have one issue that Greg touches on – if you decided to replenish the goods markers on your turn, the next player could get a lot of juicy goods just by pure luck.  Otherwise, I like it.

Luke Hedgren:  Another big fan of Hansa over here, and probably partially because of its inclusion in my totally-made-up set of “Michael Schacht Abacusspiele Skinny-box Super Fillers.” Hansa, China, California and Paris Paris are all fun, short, simple, different, and don’t rely on auctions or complex turn structures. On your turn, do your thing, move on, see how you do at the end. Great for playing all in a row. And they are all in skinny boxes, so, you know, they got that going on. Too bad Patrician wasn’t done by Abacusspiele and Burger, Baumeister & Co. wasn’t in a skinny box. They could have rounded out the “set.”

Larry Levy:  Hansa was just about the last product of what was, for me, Schacht’s golden period:  2000 to 2004.  In addition to numerous clever shorter games, which are the kind of things Schacht tends to be known for, he also produced some heavier fare during this time, including Web of Power, Dschunke, Industria, and Hansa.  I like all of these games quite a bit and Hansa is very representative of them.  It’s based on an historical period, but the theme is very lightly applied, just enough of a veneer to cover what is primarily an abstract game.  The mechanics are elegant, well developed, and interactive without being “take that”.  Like Web of Power, Hansa requires some thought, but is still not an overly thinky game.  You are fighting against the system as much as you are the other players.  Finally, like many of these games, Hansa can be quite opaque.  Just what do you need to do to score well?  What are good positions on the board?  When is defense necessary?  The answers to these questions aren’t always obvious.  This gives the game a puzzle aspect in an interactive format.  Hansa, which plays particularly well with three, definitely challenges you in this area, with timing being of particular importance.  Sadly, for me at least, Schacht really hasn’t produced games like this since Hansa came out 8 years ago.  Like most of Germany’s established designers, he has tended toward lighter designs, a position which makes perfect sense when one looks at the sales statistics.  But I sure wish he would return to occasionally designing a game like Hansa.

Brian Leet:  I have to concur with Jonathan. This is an excellent game with the significant challenge that seating and play order can have a huge impact. I really like the game quite a bit, but plays between players of differing experience level can leave an uneven feel to the game. but, when everyone is on top of things it really shines. Recommended.

Greg Schloesser is the founder of the Westbank Gamers and co-founder of the East Tennessee Gamers. He is also a prolific reviewer of games and a regular contributor to numerous gaming publications and websites, including Counter, Knucklebones, Boardgame News, Boardgame Geek, Gamers Alliance and many others. Greg has been a gaming enthusiast his entire life, growing up in our hobby mainly on the war game side. His foray onto the internet exposed him to the wonderful world of German and European games and now nearly all of his gaming time is devoted to this area of our hobby. He travels to several gaming conventions each year and is the co-founder of Gulf Games, a regional gaming get-together held in the Southern USA. Greg was born in 1961 and lived his entire life in New Orleans before moving to East Tennessee in 2005. He is married and has one daughter (now married.)
View all posts by gschloesser →
This entry was posted in Reviews and tagged Abacus Spiel, California, China, Hansa, Industria, Michael Schacht, Web of Power. Bookmark the permalink.