According to the box, Catan Junior is a “Catan Adventure for Fledgling Swashbucklers”.  When I saw it at Origins 2012, I knew that it was something that I’d want to try.  Admittedly, my kids are experienced enough at games that they can play full-fledged Settlers – but their friends are not quite ready for that, and I thought this would serve as an excellent gateway game for the young kids that traipse through our house in the summertime! 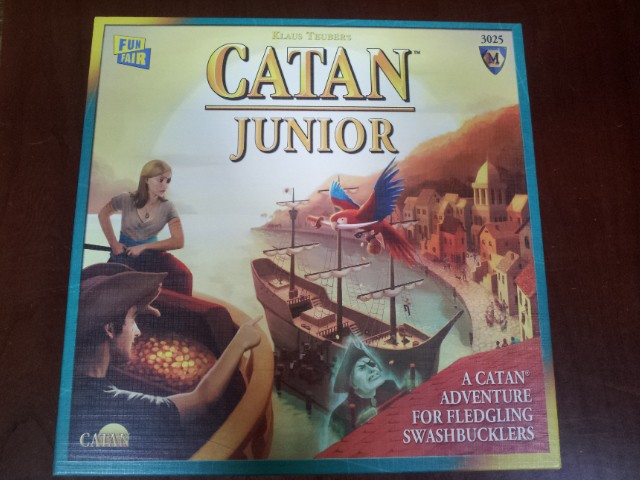 Catan Junior takes most of the rules from Settlers and simplifies them for the younger crowd.  There is also a pasted on pirate theme to help the kids get into the spirit of things.  The 4-player board is a fixed map of 12 hexes, with the numbers pre-printed on the board.  In this version of the game, only a single die is rolled, and hexes produce on 1-5.  The Ghost Captain (you know, the robber Ghost Captain) comes into play whenever a  6 is rolled.

Instead of houses and roads, you have Pirate Lairs and Ships.  The map hexes have a circle at each point, and these spaces are where you build the pirate lairs. Strangely enough, these pirate lairs cost 4 resources – one each of cutlasses, molasses, goats and wood.  On the dotted lines between these circles are where you build your ships, for one wood and one goat.  Unlike the full game, you do not have to leave an empty building space between your pirate lairs, so you only need one ship between lairs.

Resources for Catan Junior and what you can buy with them

To finish the comparison to the full game, there are no development cards in Catan Junior.  Instead, there are tiles from Coco the Parrot which are simplified development cards.  They cost a cutlass, molasses and a gold.  Unlike the full game, you do not have to wait a turn to use these tokens – if you buy one, you simply reveal the token and take the benefit immediately.

But maybe I’m getting ahead of myself – let’s go back to the beginning and talk a little bit about the game.

The goal of Catan Junior is to be the first player to build all 7 of his pirate lairs.  You start the game with a pirate lair already built on two pre-determined starting spots (with a ship adjacent to each of these as well).

When it is your turn, you first roll the die (a regular d6).  For a roll of 1 to 5, all players look at the board and see if they have a pirate lair next to a hex with the matching number on it.  If so, they receive one resource that is pictured on tha hex for each pirate lair they have there.  If you roll a 6 though, the Ghost Captain leaves Spooky Island and is placed on a hex of the active players choice.  The active player gets 2 resources normally produced by the island that the Ghost Captain is moved to.  Also, until the Ghost Captain is moved again, that particular hex will not produce any resources.

After rolling and collecting resources, the active player has the chance to build things.  There are only three things that you can build – a pirate lair (settlement), ship (road), or Coco tile (development card).  The costs for these are the same as in the full game – though the names of the resources are different.  When building pirate lairs and ships, you must remember that you always need to alternate between them on the board.

a ship and a pirate lair

If you don’t have the correct resources to build your desired object, you can always trade.  Unlike the full game of Settlers, you do not trade with other players.  Instead, you can trade with either the Marketplace or the stockpile.  The Marketplace is found on the far right of the board.  There are 5 trading booths depicted there, and at the beginning of the game, one of each type of resource can be found there.  During each of your turns, you may trade ONCE with the Marketplace by taking any of the available tiles there and replacing it with a resource from your hand.  If the Marketplace ever has 5 tiles all of the same type, they are all removed and the Marketplace is reset to have one of each resource type.  In addition to the Marketplace, you can trade with the stockpile as many times as you like, at a 2:1 ratio.  The tiles that you trade in must be a matched pair, but you can take any resource back from the stock when you do this, and you can do this as many times as you like on your turn.

(Note – the rules do offer an advanced variant of trading with your opponents, but my opinion is that if your kids can handle that sort of trading, maybe they should just be playing Settlers of Catan at that point…  As such, we’ve never played with that advanced trading rule.)

As I mentioned earlier, you could also buy a Coco tile.  When you buy one, you draw one at random, reveal it and immediately take the benefits.  There are four varieties of Coco tiles

Once you have taken the action on the tile, you place it facedown in front of you.  If you happen to have more Coco tiles than all other players, you get to place one of your pirate lairs on Spooky Island.  This must be removed if someone else ties you for Coco tiles as you have to have sole first place in order to get the pirate lair bonus.

After you finish your building phase, you pass the die to the next player who then gets to roll and build himself.  The game continues until a player has built his 7th and final pirate lair.  When this happens, the game immediately ends.

A summary of the major changes in Catan Junior:
1) Roll d6 instead of 2d6
2) When moving the Ghost Captain, no stealing from opponents
3) When buying, you trade with Marketplace and board
4) All players are always at wild 2:1 port
5) No skipping spaces when building pirate lairs
6) Use Coco tiles immediately instead of having to wait a turn
7) No resource limit to meet when a 6 is rolled

So, how does it play?

Not too bad.  It is a super quick version of Settlers – most games finish in under 20 minutes now.  The rules are set up to encourage quick collection of resources.  Trading is also a lot easier.  The Marketplace makes most resources available on any given turn, and anyways being able to trade 2:1 with the supply means you’re never too far away from building what you want.  Also, by not allowing trades with other players, the biggest slowdown factor of Settlers is taken out of Catan Junior.  Furthermore, the Coco tiles either let you build a lair or ship for free, or they give you 4 resources, which is usually enough to let you build one or the other.

Though I haven’t actually counted the number of turns in any of my games, I’d be surprised if any of them went past 12 or 13 turns (to build 5 more pirate lairs from the starting conditions) because it is so easy to build things.

The rules also help prevent crying from younger gamers as the Ghost Captain is a much gentler punishment.  Rather than stealing from an affected player, the player moving the Ghost Captain simply takes 2 resources from the supply.  And let me tell you, as a dad who has had to watch a bunch of kids, crying in games is simply not tolerated around here….

The only concern I might have is that it is possible for a slow building player to get blocked in on the board.  However, I think this could really only happen near the end of the game, so it’s not something I’d dwell on for too long – but something that an adult should be aware of just in case.

I don’t think that I’d ever really want to play this with just adults, but as an introductory game to the Catan universe, I think that this is perfect.  Probably for kids up to about 4th grade or so, after that point, I’d be more likely to just get them into regular Settlers.

Opinions for other Opinionated Gamers

Greg Schloesser:  My one and only child is now 25-years old.  Thankfully, I don’t have grandchildren yet, and I am rarely in situations involving young children.  As such, I don’t often have the opportunity (or desire) to play games that are targeted for a young audience.  Thus, I am not the ideal person to critique such games.

I did manage to play Junior Catan at a recent convention wherein children were present.  The game involved two adults and two children.  Try as I might, I had trouble envisioning the game through the eyes of a child.  I am a huge Settlers fan, so it felt far, far too simple for me.  But I am not the target audience; young children are.  As such, I can see how this is a nice Settlers-style game that is easy to learn and plays fast.  As Dale mentions, gone is the nastiness of the robber, and trading is simple and easy.  No negotiations skills are required.  These factors alone should help make the game accessible and enjoyable for a wide array of younger children.  The age range will most definitely be on the younger end of the scale, however, as children of middle school age or older should be able to handle regular Settlers.

I will note that in an effort to be brief, the rules are silent on several issues.  If a player constructs multiple pirate lairs along a hex, does he receive multiple resources when that hex is activated by a resource roll?  The answer in regular Settlers is, of course, “yes”, but the rules here do not say.  We assumed “yes”, which does make the game play MUCH quicker.  Also, the way the board is designed, it is quite possible for a player to have both of his lairs isolated, with all paths of expansion cut-off.  What happens then?  Again, the rules are silent.  An attempt at brevity seems to have sacrificed some clarity.

Ratings Review from the Opinionated Gamers
I love it!
I like it. Dale Yu
Neutral.
Not for me…

1 Response to Review of Catan Junior