We’re continuing on with our series of Essen Previews for 2012.  Today’s preview of Ginkgopolis will be the first of many rules reviews – where one (or more) of us takes a look at a game through the rulebook and gives their thoughts on them.  The goal here is to concisely summarize game play (not necessarily being comprehensive with the rules) as well as give some initial thoughts about the game.

A city is laid out in 3×3 grid, using 3 colors of buildings numbered 1-3.  There are also urbanization locations around the outside of the city in the 12 possible exterior locations in clockwise alphabetical order.

The initial setup diagram from the rules. The square tiles in the center are the buildings. The round A-L markers around the outside are Urbanization sites. Apologies for the low-res picture as I have lifted them (with permission) from the ruleset

Players get 3 Character cards (from a deck of 27). Each player is dealt 4, and chooses one to keep and hands the rest to their neighbor. This is done twice more so that all players have 3 Characters to start the game. Each of these Character cards has a bonus that is triggered when certain actions are taken during the game.  In the basic game, players are simply given a predetermined set of 3 cards.

There is a card that matches each tile and ubanization location, and a deck is created from the matching cards from pieces in setup.  [There are 3 colors of tiles, numbered 1-20 – so 51 tiles/cards are not in play at the start of the game.] Each player is dealt a hand of 4 cards from this deck.  The bottom portion of each card has an action or bonus on it.  Cards numbered 1-9 provide resources (if red), tiles (if blue) and VPs (if yellow).  Cards numbered 10-20 provide endgame bonus scoring.

Examples of 3 cards from the game

The tiles represent buildings in the city of Ginkgopolis, and through the course of the game, you will build buildings taller and taller by playing tiles onto the 3×3 grid and at times expanding that grid. Each building has an ability/bonus associated with it – there are 3 separate currencies in the game, each associated with a color: Resources (red), Buildings (blue), Success points (yellow).  The winner is the player with the most Success points.

Choose a card (and possibly a tile)

All players secretly and simultaneously choose one of their 4 cards and places it in front of their screen.  If desired, a tile can be played with the card.  If you don’t like your options, you can play one of your 2 “New Hand” tokens which allows you to discard your current hand and get a new set of 4 cards.  This does cost you 2VP at endgame however.

Now, the cards are flipped over and resolved in clockwise order from the start player. There are 3 situations that can occur here: Exploiting, Urbanizing, Constructing.  Exploiting allows you to use a building to generate things. Urbanizing allows you to expand the city laterally. Construction lets you build upwards.

1) Exploiting – play a card by itself – you take resources (if red card), tiles (if blue card) or VPs (if yellow card) – whichever thing matches the color of the card.  The number of things you get is equal to the height of the building.  If you play an Urbanization card, you simply get your choice of 1 resource or tile.   Finally, you now look at the cards in your play area – both Character cards as well as those gained through Construction – and take any Exploit bonuses found on those cards.

2) Urbanizing – when you play an Urbanization card with a tile – you place the tile you played on the space on the table where the matching urbanization marker is.  You move the urbanization marker to the outside of the newly placed tile, making sure you keep the clockwise alphabetical order. You can then exploit (use) the special abilities of the adjacent buildings to the one you just built – depending on the location of your newly built tile, you may get to exploit multiple tiles.  Place a single resource from your supply on the tile as this is a one-story building.  Mark this new tile with a grey New Construction marker. Finally, you now look at the cards in your play area – both Character cards as well as those gained through Construction – and take any Urbanization bonuses found on those cards.

3) Constructing – when you play a Building card with a tile – you place a new tile on top of the tile depicted on the card you played. Return any resources found on the old tile (if it is an opponent, they score 1VP per resource returned), and place your new tile on top of old one.  You will need to pay extra resources if the color of the new building is different than the old AND/OR if the number of the new tile is lower than the old.  Then, place a number of resources from your supply equal to the height of the building you built.  Mark this tile with a grey New Construction marker.  You keep the card that you played in your play area, and will get its benefits for the rest of the game.  Finally, you now look at the cards in your play area – both Character cards as well as those gained through Construction – and take any Construction bonuses found on those cards. 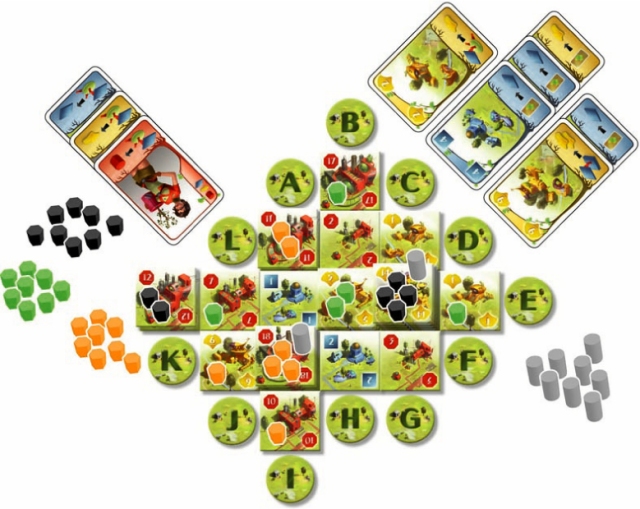 Illustration of a game in progress

End of Round (and game)

The game ends at the end of a round when either end-game condition is met:

If either of these have happened, calculate end game scoring.

If the game isn’t over, all players hand their deck of unused cards to their right-hand neighbor.  If the deck is empty, a new deck is made from the discards on the table as well as new cards matching all of the buildings with grey New Construction markers on them. The grey markers are removed from the board as the new cards are added in.  All players draw until they have 4 cards in hand..

Thoughts from the Opinionated Gamers:

Dale Yu:  Well, I’ll start off by saying that I’m pretty excited about this one.  First, Pearl Games has a 100% success rate with me so far, and at this point, I would try any game from this Belgian company sight unseen.  I admit that part of my love for Troyes and Tournay is the excellent graphic design, and while Ginkgopolis does not share the same style, the artwork that I’ve seen so far is still top-notch.

I like the simplicity of the rules.  The gameflow is simple, and there aren’t any exceptions to rules.  The graphic design of the cards is clean, and the iconography looks easy to follow from the cards I’ve seen.

The secret and simultaneous selection isn’t quite so secret because players should be able to infer what you are doing based on whether or not you’re playing a tile with your card!  Of course, without playing the game, it’s hard to know what the effect of this knowledge is – but I suppose that it had to be done this way.  If a player was able to decide on playing a tile after the actions are revealed, that might lead to some shenanigans or at least AP downtime as players get the chance to choose their action (Exploit vs Urbanize) after they see what others choose.

I tend to enjoy tactical games, and Ginkgopolis looks like it will scratch that itch.  Each turn, you have a limited number of cards to choose from, and you just have to make the best you can from those choices.  Given that the cards pass around the table, you’ll also know most of the possible actions that your neighbor will have, and you can plan for that as well.

I am also more than a little intrigued at the “control” the players have over the game length.  One condition is straightforward – being able to place all of your resources on the board.  The other condition, when the tile supply is exhausted twice, is quite variable as each player contributes tiles back from their supply to make the second tile deck.

Finally, I’m always interested in games with a solo play version – it’s a good way to learn how to play the game before introducing it to your game group, and it’s always a nice way to spend a rainy afternoon or quiet evening when no one else is around.

This is one of the first games that I plan to pick up at SPIEL this year.  Hopefully Pearl Games will have their inventory earlier than in 2011!  Partly because I don’t want to wait for this one, and partly so Sebastien doesn’t have a heart attack from the stress of waiting for his games, hoping that they make it in time for the show!

Larry Levy:  I’m actually having a hard time figuring out how this game will play based on the rules.  It’s not clear to me if the players will have a good deal of control or if things will be chaotic, nor do I have much of a grasp of the kinds of strategies to pursue.  Consequently, I’m not as excited about this one as Dale is.  I’d like to try it out if I get the chance because I’ve enjoyed Georges’ games to date (particularly his first published game, Royal Palace) and there’s enough here to make me think this might be a nice design.  But I’m not sure I’ll seek it out.

Jonathan Franklin: Ginkopolis reads like a reasonable SdJ/KedJ contender with strong art, simple play, and very clear rules.  Simultaneous play reduces AP while permitting organic growth of the city.  For me, the hardest part to figure out from the rules is whether you are maximizing your gain each turn or whether you might hold back your strongest card, hoping it becomes even more valuable later.  Also, since you score based on how many districts (orthogonally adjacent tiles of the same color) you are in, it is unclear how much of the game is decided by that part of the scoring.  I’m looking forward to trying it.