For the past two years, there has been a stand at Essen which has brought the best of the boardgames from Russia to the fair.  Last year, I was pleasantly surprised by a number of their games including Leonardo, Potion Making: Practice and Evoluion.  This year, they have a number of new games to consider.  The folks at RightGames were nice enough to send a box with their selections for this year – and I have been playing them with the kids over the past few weeks.  Below are some short capsule reviews of these games…  All of the games that I have tried out for 2012 are relatively short in game length, and each of them has simple rule sets – only two pages each!

For more information on these games, you can go to the RightGames website at: http://www.russianboardgames.com/ 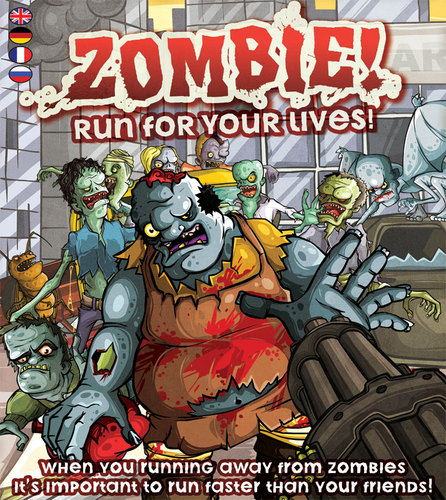 Zombie! Run For Your Lives! (Z!RfyL!) is a nice set collection card game where the players try to be the last player remaining against the zombie horde which attacks them all.

Each player starts the game with a hand of 4 cards – and these cards are of 2 general types: white cards which represent items that can save yourself and black cards which are zombies that attack the other players. All cards have a symbol on them which represent an item.   On your turn, you do one thing: draw a card from the deck and then play a card from your hand (now with 5 cards) – white cards go in front of you, black cards are played in front of other players.   If a player has a zombie card and an item card with the same icon on it, then both are discarded.  There is a restriction is that you cannot play a card that is a duplicate of an already existing card in front of the player you are playing it on.

Example of a white item card

And though I just said that you only did one thing on your turn, I was lying. Actually, you have the option each turn of invoking the Special Rule – once you draw your card, you can choose to play a white card on another player or a black card on yourself, and then take your turn as normal (draw then play).

You are eliminated from the game if you have 5 different zombies in front of you – remember you can not have identical zombie cards played in your space.  If you’re dead, you cannot win the game, but you are not completely out of the game either.  When your turn comes around, you draw a card and then give it to any of the remaining alive players.  This player then has to legally play the card if possible.  If it cannot be played, the card is discarded and that zombie player’s turn is over.   There are two ways that you can win: either have 5 different item cards in front of you or be the last person remaining alive in the game. 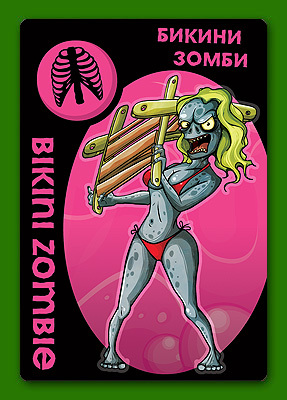 The game is a quick affair, with most games ending within 10-15 minutes.  It’s about as deep as you would think it to be, but I will say that the teenagers in the neighborhood have grown to like it.  Though I haven’t tried it with the regular gaming group yet, it would make a decent filler given the quick game length.

In Shinobi, each player acts as a secret agent for one of the five most powerful clans in ancient Japan. The catch here is that you are “secret”, and no one knows which clan you belong to, until the end of the game.  Each player controls a province in Japan – this is represented by the area in front of each player – any cards played there do not “belong” to that player, they are merely in that province.  There are 11 cards of each clan in the deck as well as 3 ninja cards.  The most powerful clan (and winner of the game) is the clan which has the most cards on the table at the end.

Example of a clan card

You start the game with 4 cards in your hand, and on your turn, you do three things (in this same order)

The ninja card. I had always thought ninjas dressed in all black and carried throwing stars.

After you have taken all 3 actions, you draw back up to 4 cards and then play rotates to the left.  Game continues until the deck is exhausted – when the last card is drawn, each player gets one more turn.  Then, players reveal their identity and the cards on the table are counted up.  The player whose clan has the most cards on the table is the winner!

I’m not normally a fan of these secret identity games – mostly because I’m horrible at hiding my identity!  This game is similar in abstract form to Heimlich and Co., but I prefer the cards in Shinobi to the dice in Heimlich for some reason.  However, the SdJ winning Heimlich might be a little more streamlined in gameplay.  It will take you a few rounds to get into the 3-part flow of a turn in Shinobi, but once you learn the pattern, it’s easy to play the game afterwards. 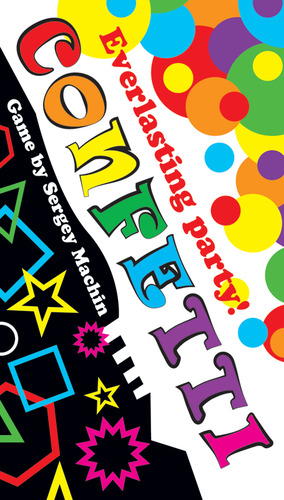 Confetti is a new party game from Sergey Machin, the designer of both Potion Making and Evolution which I first played last year at Essen.  In this game, players vie to collect sets of cards with different sized color dots on them.  Each card has three dots on it, each a different color – one small, one medium and one large.

This quick game is played over 3 rounds. In the first round, roughly half the deck of cards is thrown onto the table.  There is a sandtimer which controls the length of the round.  During the round, you are supposed to keep your left hand on the edge of the table.  Any cards you collect during the round are placed under this left hand – and while they are there, no one else can take them.  You are alowed to use your right index and middle finger to pull, push or flick cards into your left hand.  You must always be on guard though – if your left hand isn’t on top of your cards, any other player can steal them!

Correct placement of the hands is crucial

Your goal is to collect cards so that you make scoring sets – a scoring set is a small, medium and large dot of a single color.  When it is time to score, you get 1 point for each scoring set.  It is possible to get a full set – 3 cards which yield 3 points.  In the first round, you are able to collect up to 6 cards – but you do not have to take all 6 allowed, you may choose not to take another card or you might simply run out of time.  If there is ever a time when two players want the same card, and neither will yield to the other, that card is simply discarded from the game and neither gets it.

At the end of the round, each player scores the points they have collected.  For each scoring set, they score one point.  You can have multiple sets of the same color, but each specific dot can only be used in one scoring set.  It is important to use all of your collected cards because if you manage to take a card which you do not use at all in scoring, you lose a point.  Additionally, you lose a point for each card you take over the allowed number.  Once you tally your points for the round, you simply keep a number of cards equal to the points you have scored and place it in a scoring stack (flip the cards over so they don’t get confused in later rounds).

Scoring example. Here, the top three cards is a perfect set – scoring 3 points for yellow, purple and green. The bottom three cards only has a red set – so there is a total of 4 points here. No penalty points are taken because all the cards are used in scoring

Round two is the same as round one – except that you use the other half of the deck which wasn’t used in the first round. You are again limited to collecting six cards in the second round.  Scoring is done the same way.

In the final round, you take all the cards which have not been kept by players as scoring cards.  These are shuffled and then thrown on the table.  In this final round, players are now able to keep 9 cards.  Scoring is done at the end and the player with the most points is the winner.

When I first read the rules to Confetti, I didn’t know what to expect.  I thought that it might just be a kids game, but as it turns out, there is more to the game than just luck.  There is enough time in the timer in the first two rounds to allow you to try to plan your card acquisition well.  Assuming no one else is fighting for your particular card(s), you should be able to score well, and possibly collect the cards in a perfect set (assuming that they are all available in the half of the deck that you are using).  In the final round though, there is much more time pressure, as well as th possibility that the card you’re looking for has already been locked up in someone’s scoring pile, so it’s a bit more frenzied.  This is a fun little game that should get a fair amount of playtime as a filler.

Those are the three new games that we have played so far – if there is time before Essen, I will try to write a bit about the expansions that I received as well for Potion Making and Evolution.

Dale Yu is the Editor of the Opinionated Gamers. He can occasionally be found working as a volunteer administrator for BoardGameGeek, and he previously wrote for BoardGame News.
View all posts by Dale Yu →
This entry was posted in Essen 2012, First Impressions. Bookmark the permalink.