Bagging Monthly #3: Bagging on the Road

When I go to gaming get togethers, the one question I’m consistently asked tends to be “How tall are you?” to which I say something particularly clever, and then change the subject to boardgame bagging. After all, spreading the love of proper bagging for boardgames starts with the contact you make with gamers, and ends typically with either nods of understanding and conviction or with such severe eye rolling that I’ve seriously considered putting 911 on speed dial so that detached retinas can be attended to as quickly as possible.

But there are pitfalls to traveling for gaming events, most notably the unexpected purchase of new games. Like me, you’re probably a responsible purchaser of games, having the ability to withstand the siren call of the shiny newness of a game you’ve never heard of before but one that undoubtedly is better than any game you currently own. But occasionally, you’ve probably decided to pick up a game at a convention or a gathering of some sort, most likely due to your experience with said game, having at least a half dozen plays of it under your belt, and after weighing the pro’s and cons of your purchase, you plunk down the cash for the game. And now it’s yours.

If you happen to travel to Essen in October, to the mighty Spiel where there are hundreds of new games available for purchase, you might pick up more than one game. You might pick up dozens of them. Of course, I weep for you, because that is the road to gamer ruin. Or so I’ve heard.

Regardless, you have a new game or two or fifty, and you’re away from home. What do you do? Well, it’s very likely that you’re going to crack open one of those games, either to play it with your buddies, possibly to read the rules, or, you might just want to glance lovingly at the fresh cardboard, shiny wood pieces, or shrinkwrapped card decks, imagining what might be, and smiling, possibly even tearing up a little.

If you do decide to open up a game, you’re exposing it to all sorts of potential hazards, not the least of which is damage or lost components. The thing is, when your game is still in shrink, it’s pure. Unless you’ve banged up the box corners somehow, the game is as perfect as it ever will be. And of course, we all want our games to be as close to perfect as possible, even after they are played; that’s why we who love our games bag the pieces in them.

When traveling, always carry a few dozen bags with you. If you know you’ll be purchasing a lot of games, take even more. Two or three sizes is probably fine. I usually have 3×3’s, the always-dependable 4×4’s, and also 4×6’s. If I’m going to Essen, I’ll take some bigger ones too: 6×9’s and 9×12’s. Those big ones can come in handy when commingling pieces from multiple games in the same box. And of course, you want to bag the bags you’re bringing with you, folding (but not creasing) the bags into a bag that is the same size as your largest bag.

Realize that the initial bagging of a game on the road is unlikely to result in the best possible bagging situation. You might not have the right sizes, or you may decide to conserve space by combining items that would normally receive their own, separate bags. This is just something you’ll have to be at peace with. However, just because you use the “wrong” bags or combinations of pieces doesn’t mean you should leave it that way once you’re home; be sure to set aside enough time when you get back to review your on-the-road bagging choices and adjust as necessary.

In the last few years, I’ve seen publishers start to add bags to their games. This is a godsend for bagging on the road, but keep in mind that this is always a stopgap measure for when you don’t have bags with you. To date, I’ve never seen a publisher provide Bagging Monthly Certified bags in their games, so while these publisher-provided bags do solve the immediate protection, sorting and loss-prevention goals, those bags really aren’t up to the challenge of long term storage and effectiveness.

One point of contention among gamers is throwing out anything in a box once it’s opened. If you’re a sprue-keeper (a topic which will be covered in detail in a future Bagging Monthly), you know exactly what I’m talking about. But when you’re on the road, you should never throw out anything except the shrink that surrounds the game (though even keeping that is an option if you have a tool that slices the shrink nicely). Why? For the simple reason that gaming halls and hotel rooms are magnets for small pieces, and in the excitement of opening/playing a new game, it’s easy to accidentally throw away something that’s actually critical to the game.

While that’s the ideal situation, you’ll find that tossing unneeded items like inserts and sprues and rules in other languages can save you a LOT of weight. I weighed my “throwaways” at Essen Spiel a few years ago and the total was more than 30 pounds. Given the annoying limitations on baggage weight, 30 pounds can save you a hefty “overweight” fee on your favorite airline.

You’ll find that many games have a lot of empty space in them (especially if you get rid of sprues and inserts), and you can use this space to pack more games. With clever packing, you can reduce the physical size of your game purchases by more than 50% by using “Russian doll” techniques. When doing so, you’ll find that you need to change the location of some of your bits, so they might not end up in the box they came from. Do this very very carefully;  no one wants to ride with you in the back of an ambulance because you had a panic attack thinking that you lost the special limited edition Kaigan token that you accidentally packed in the latest Martin Wallace game because the Kaigan box was full of decks of cards. Not that that has happened to me.

Bagging on the road isn’t always ideal, but following these guidelines can keep those newly-purchased games safe and secure until you’ve reached the safety of your home.

Bagged Game of the Month: Suburbia

With Essen Spiel taking place this week, what better game to show off the bagging to than one of this year’s releases: Suburbia, which I just so happen to have a preview copy of! 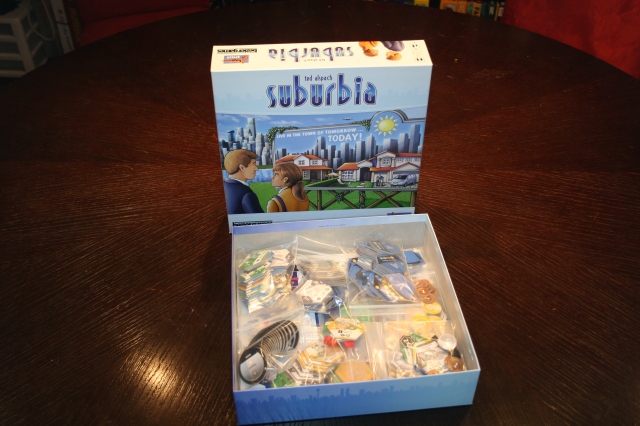 You’ll notice that there’s plenty of extra space in the box; before you get all judgmental, however, note that the box is pretty much full when you get it. Why is that? Suburbia comes with 12 (yes, twelve) full-size (of the box) punchboards full of items. Those punchboards take up just over 1/2 the thickness of the box.

I can’t recall ever seeing a game’s punchboards “wrapped” together this way, but be assured, there are a lot of them in there.

Punching the game therefore results in 12 sprues. Because I could, I weighed the sprues, and was surprised to find out they weigh more than 1 pound (yes, with all the pieces punched). In shrink, the game weighs about 4 pounds. After punching, the game is less than 3. A huge difference! 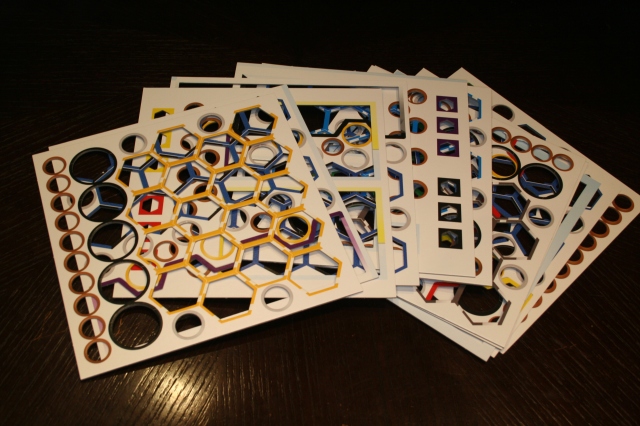 Bagging Suburbia at Essen (and tossing the sprues) will save you more than a pound!

Not all games will save you that amount of weight. Because the punchboards in Suburbia are used for tiles, player aids, money and even the game boards, they happen to be nice and thick, which you can see here on a closeup of a tile. 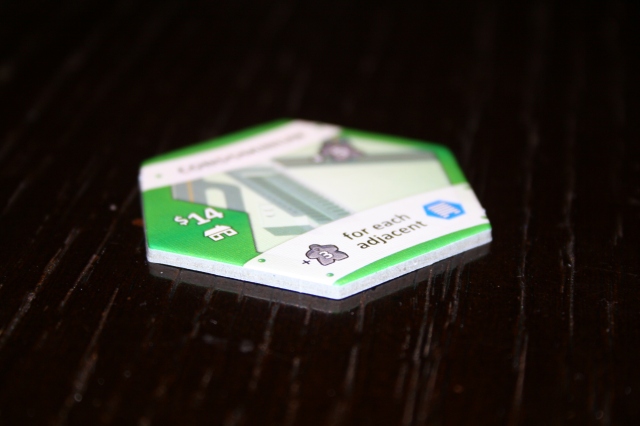 Once you’ve punched out all the pieces, you’ll be left with a giant pile of bits: more than 300 pieces in total. Suburbia is a game that demands excellent bagging skills! 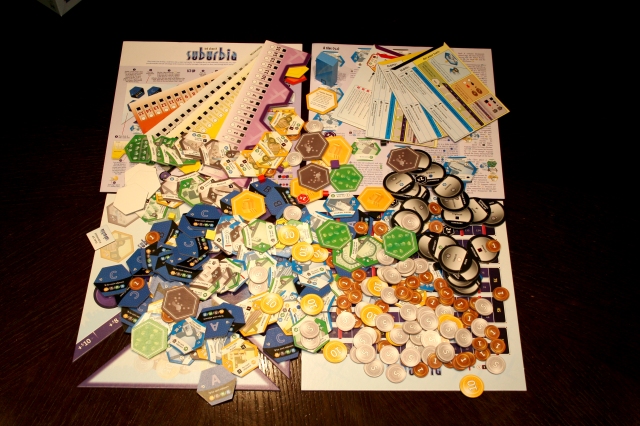 The publishers for Suburbia have thoughtfully included bags in the box, which come bagged in a bag. 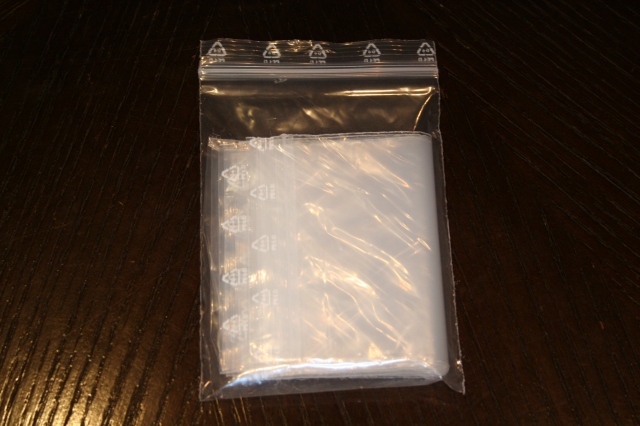 There are actually 10 4×6 bags included with Suburbia (unfortunately they are only 1 mil thick, below Bagging Monthly standards), which is still good enough for your on-the-road bagging needs. Of course, since the bags aren’t the necessary thickness they’ll only do for bagging away from home…you’ll find that you have enough bags to sort the pieces in the game as suggested below (though you’ll have to combine a few items), which can tide you over until you have access to a proper set of bags. 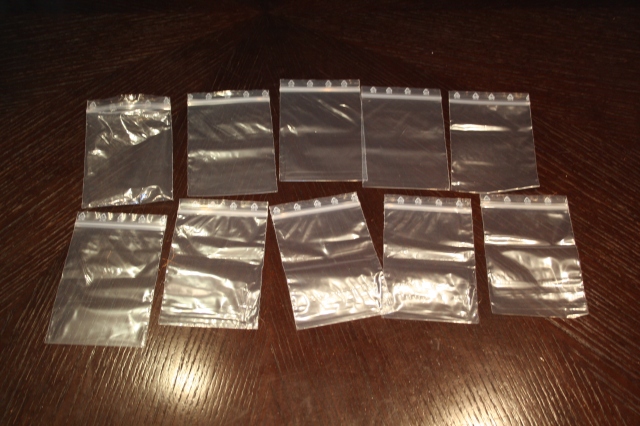 The first thing to do is to bag the more than 100 coins in the game. All of these will easily fit into a single 4×6 bag. 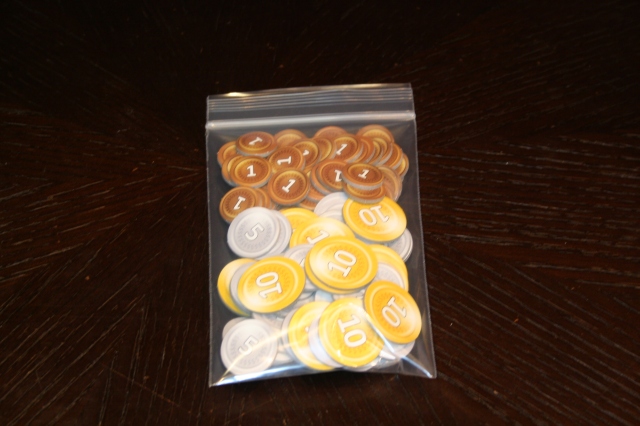 With those out of the way, it’s easy to sort the remaining pieces. There are two sets of rules (the main rules and the tile manifest) which will fit nicely in either the very top or bottom of the box. 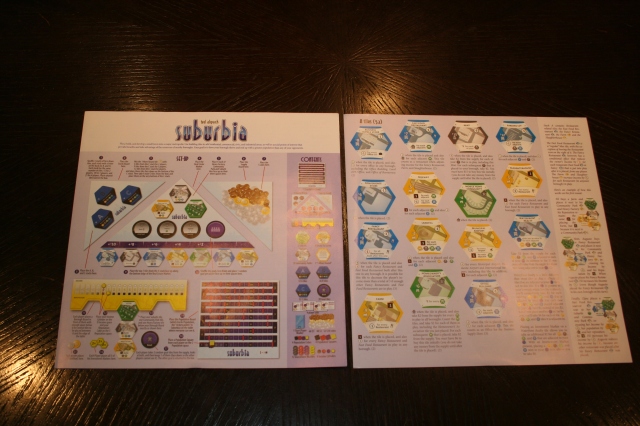 The scoreboard is a punchboard of and by itself, which is also the size of the box. 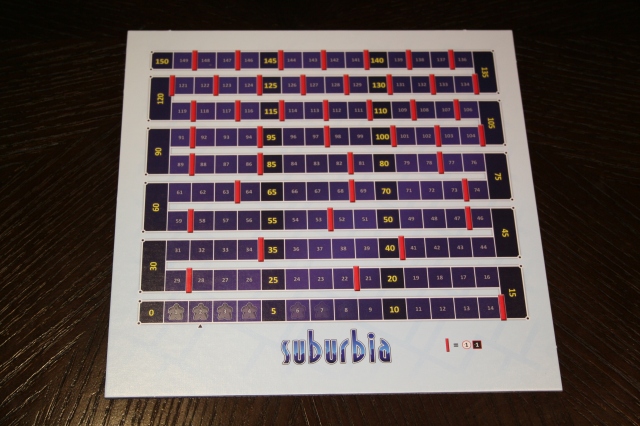 The other game boards, including the Real Estate Market, the Stacks Board and the Supply Board are all big enough not to need bagging. 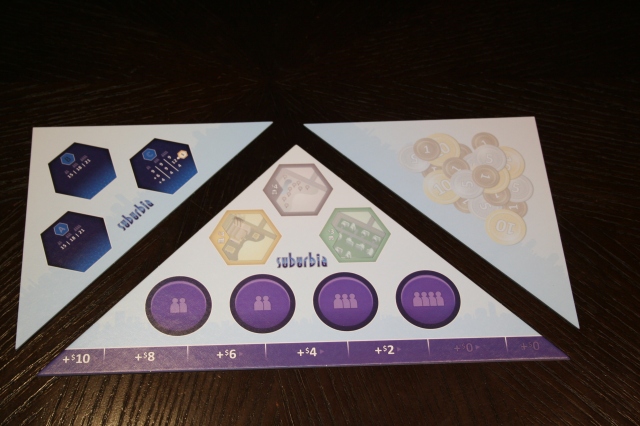 Then you get to the tricky part. At the beginning of each game, each player receives the following: A large borough board, a player aid, 3 different wood bit markers, 3 2x Investment Markers, $15, and three Basic tiles. This is where you have to make the toughest bagging decision in the game: Include the borough board and player aid with the rest of the much smaller pieces, or hand them out separately? 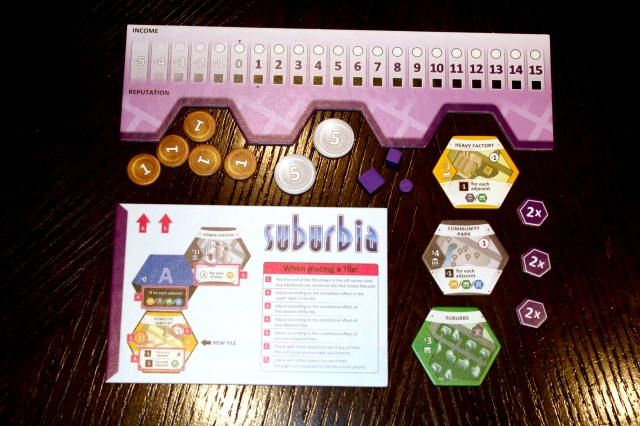 I’ve come down on the side of handing out the Borough Board and Player Aid separately for the following reasons:

With that reasoning, then, I’ve split up the bagging of player pieces into simply the small pieces/money into 4×4 bags, while leaving the player aids and borough boards to float in the box. 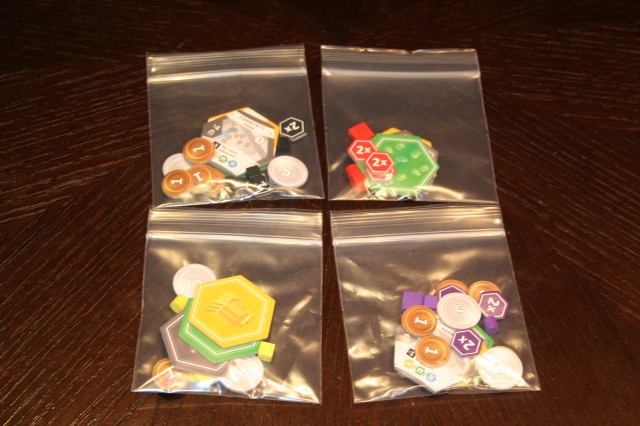 The rest of the bagging is much more straightforward. There’s a 4×4 bag for goals: 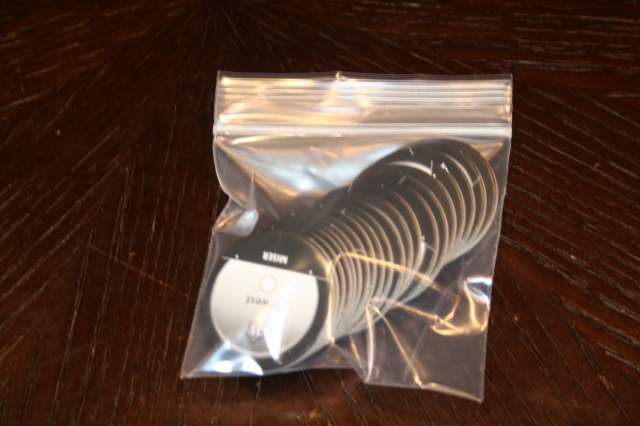 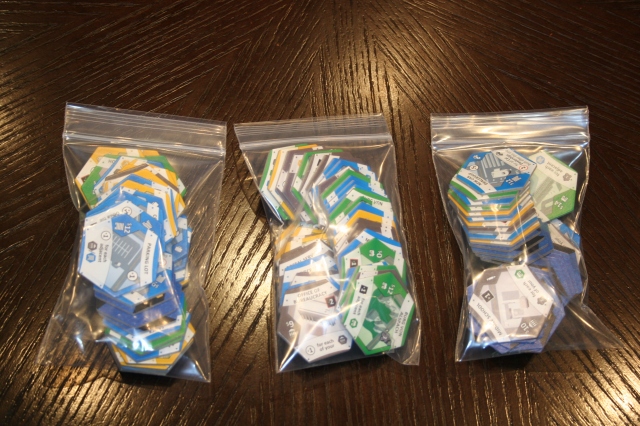 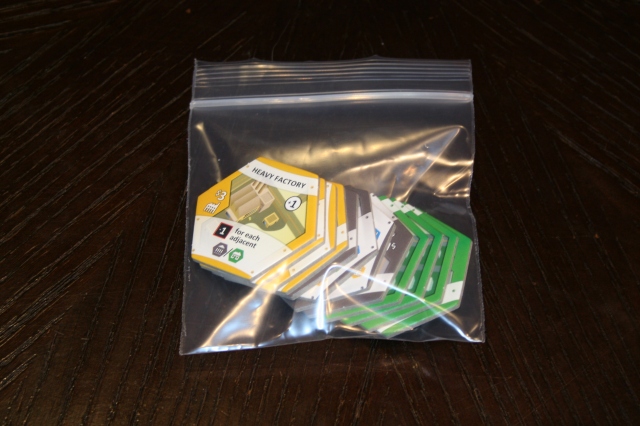 And the Start Player marker shares a 4×4 bag with the “C” tile that is the 1 More Round tile: 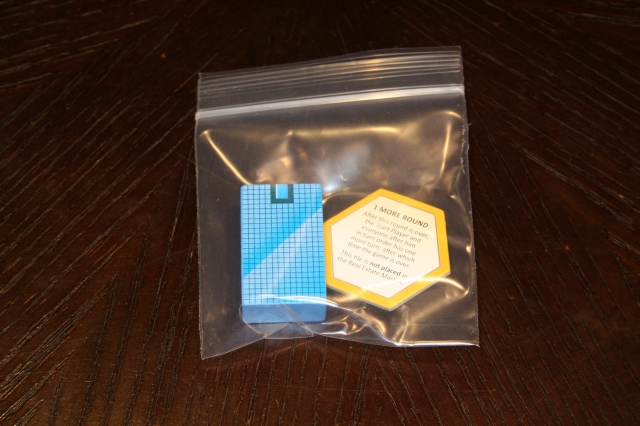 And finally, the “extra” pieces that include the proof of purchase and a blank A, B and C tile (thoughtfully added in case you lose a tile at some point in the future) go in a 4×4 bag as well. 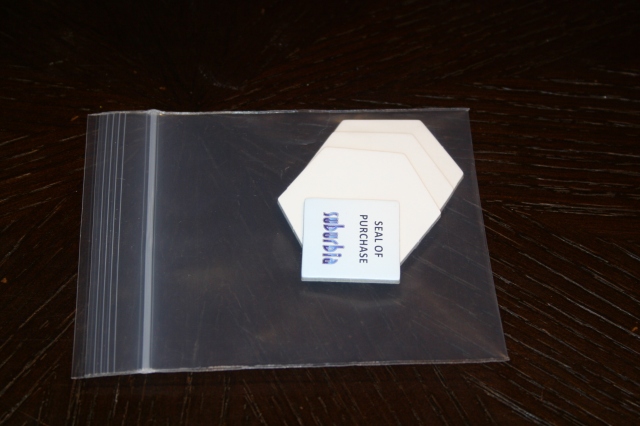 I’m often asked how cats should be packaged inside your game boxes. Well, to placate the cat people, here’s what an 8 month-old kitten looks like in a box of Suburbia: 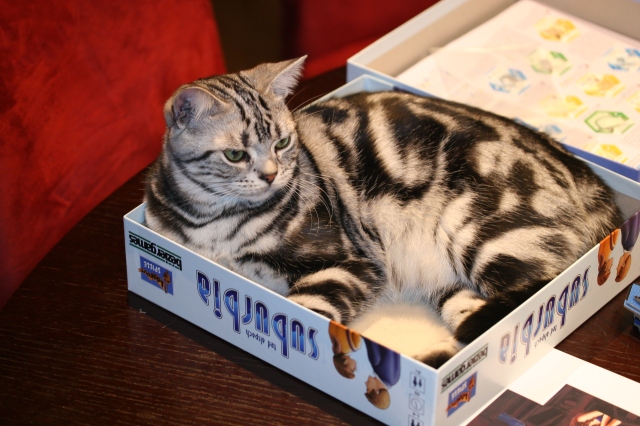 And I shouldn’t have to mention this, but please do not bag your cats. While this will initially keep them out of trouble, they’ll just claw and bite their way out, making a mess and destroying one of your precious bags in the process.

In the next Bagging Monthly, it’s time to talk about card sleeves…are they really just bags for your cards?