Dale Yu – Report from the Gathering of Friends, Day 4 – Monday

Well, this may or may not be a gaming day. Lots of social invitations today, and I think it would be a good day to possibly spend hanging out with friends and enjoying my vacation in a non-gaming sense. Today, the weather will likely be the best it will be all week – highs in the upper 70s and sunny. A walk/hike to Goat Island and see the falls. I’ve already made one trip to Canadia, and likely will go again today as well – the wind can be brutal on the bridge, but I imagine it will be delightful today.

There is a group going Letterboxing today, and I’ve never done that – though I am interested. My brother has tried to introduce me to it, but I just haven’t managed to do it on my own yet. Another group of friends is going to Niagara on the Lake for some wine tasting. I went two years ago, and I was surprised by the quality of the (regular) wine as well as overwhelmed by the sweetness of the ice wine. I’m sure there are other things going on, but I don’t have time today for even the options I’ve got in front of me already!

I’m in the ballroom early today, around 9am – and the crowd is definitely thinning out. Only 10 people in the room at 9am today, with a rousing game of Schnappen Jagd the only thing in play. I quickly jumped in to Brugge, and I am still enjoying it. Sadly, the translation is not yet available (only one copy currently exists –it was translated just before the Gathering and poor Jeff had to cut and sleeve them in the car ride down from Quebec), so I’m trying to get Sophie to hurry up production!

To recap the games played yesterday:

As you can see, I concentrated on newer games and repeat plays of the newer games, thus many fewer games played than Saturday. But I definitely enjoyed the chance to play some games multiple times – that’s a luxury that I sometimes don’t even get at home with regular weekly gaming. I think I might have even started developing a strategy for Brugge and Spyrium after multiple plays.

More to come later – time to figure out what I’m doing with my day! 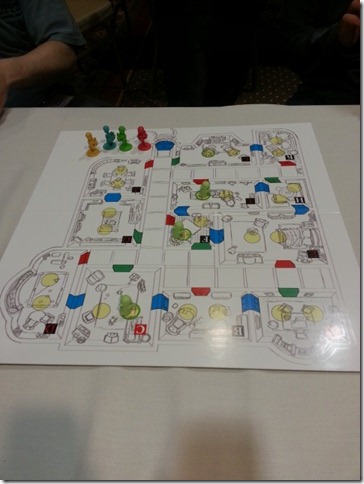 Very rough schematic version of Treasure Hunters, a neat co-operative game coming out from Mattel.  I am now 0-for-9 lifetime against this game. Note lawyers want me to say – artwork is work in progress and the final art will be on the game in October.  Personal disclaimer – the designer of the game is my brother. 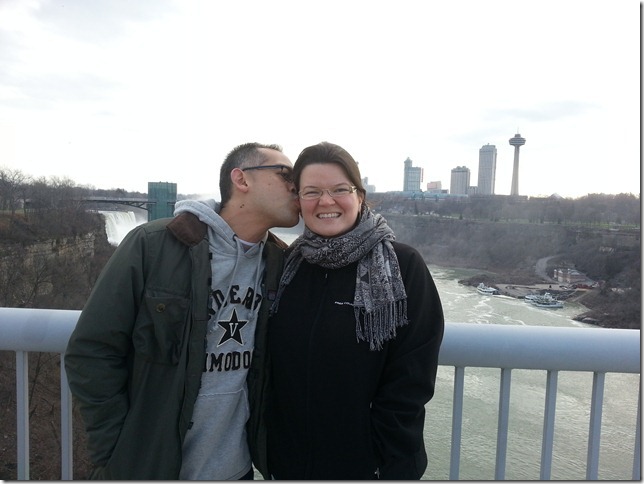 Telling Janet a secret in front of the falls. 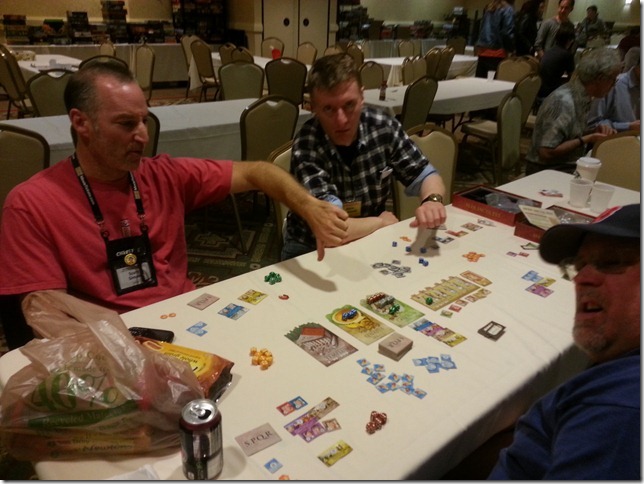 A shout out to OG’er Jeff Allers – your games are in play! 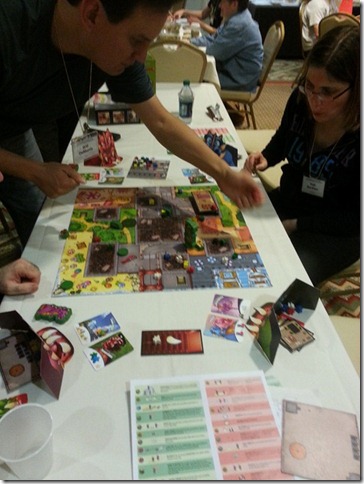 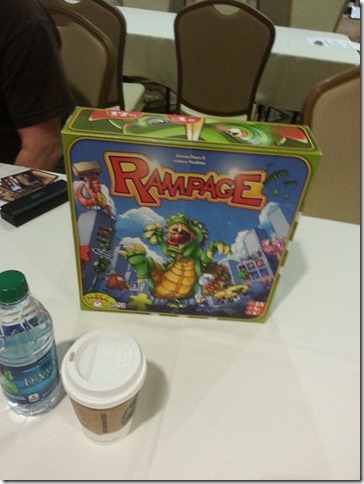 I’ve been waiting three years for Rampage. Of course, even though it’s here, I still haven’t had a chance to play it… 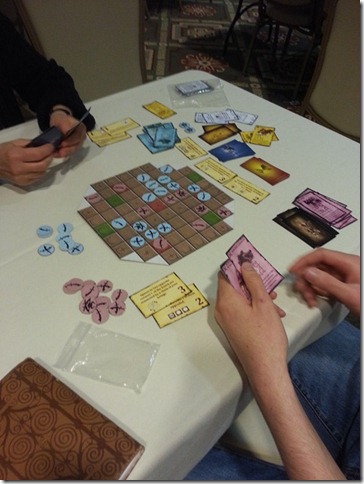 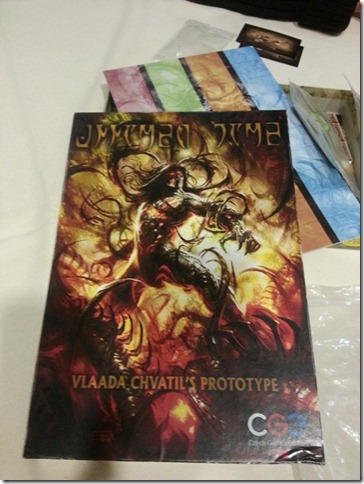 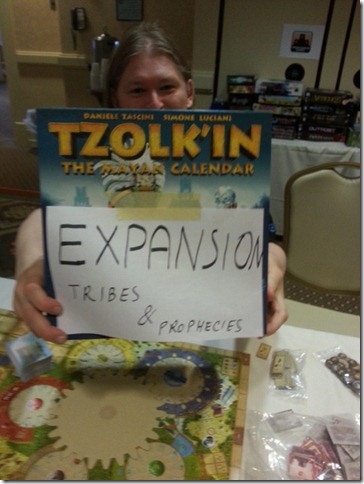 This picture probably explains itself 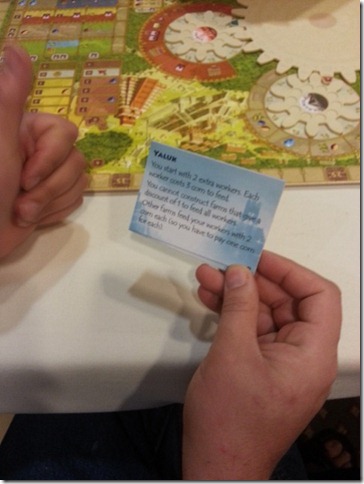 Sneak peek at one of the cards from the expansion 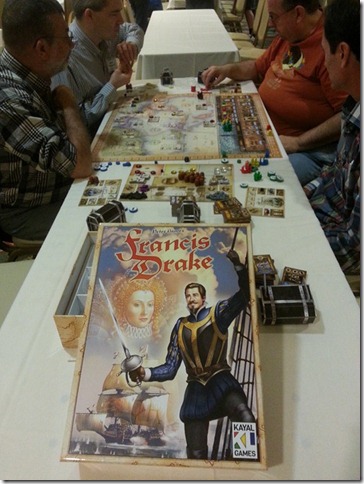 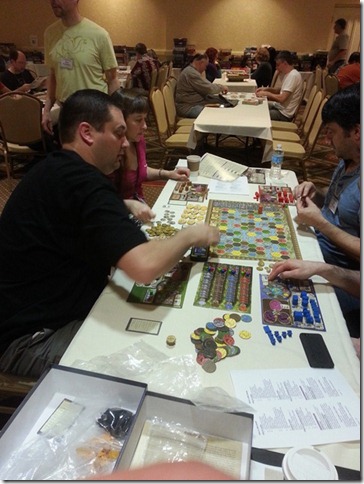 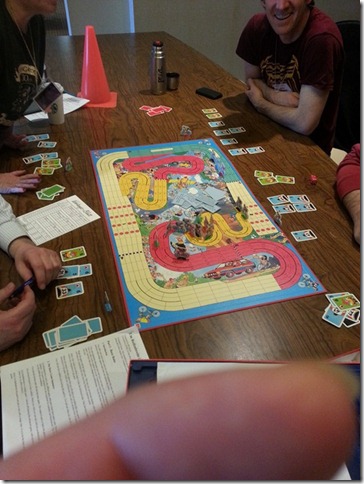 Not everyone here is in the Cult of the New apparently… I haven’t played this game in probably 10 years.  Still didn’t play it today. 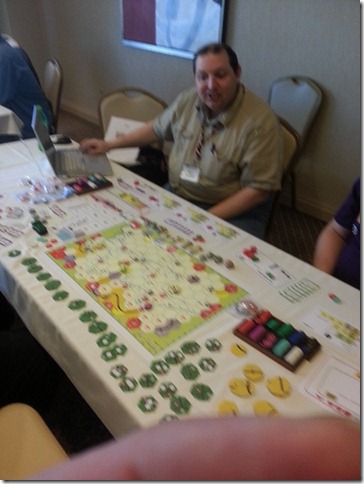 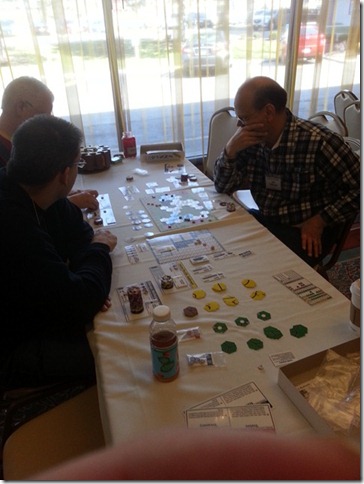 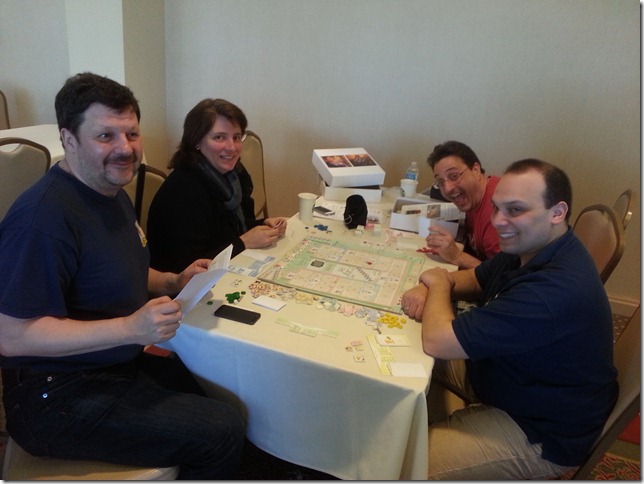 4 Responses to Dale Yu – Report from the Gathering of Friends, Day 4 – Monday