Kosmonauts is a race around the solar system using a vector-based movement system, much like Bolide the car racing game and many others that preceeded Bolide. Each player controls a spaceship that has to leave Earth, visit seven of the eight planets, and return to Earth. Your speed and direction on the hexagonal grid is determined by your engine thrust. In the case illustrated below, the cubes are fuel pushing your ship toward the camera. In this case, you will be pushed two spaces in one vector and other one space on the red vector in the image below. If you want to slow down, you place a cube opposite one you have already placed – that way they cancel out and you remove one cube from each side, thereby slowing down. 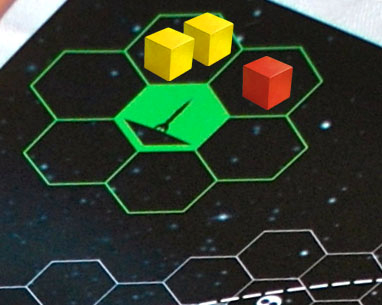 Now that you have a vague sense for how your ship moves on the grid, we get to the point of the game. You are travelling around the solar system, landing on planets, taking off again, and heading to the next one. Well, here is the second cool part. The planets are all orbiting. You cannot aim for where the planet is now if you expect to arrive there in two turns. You must aim for where the planet will be. 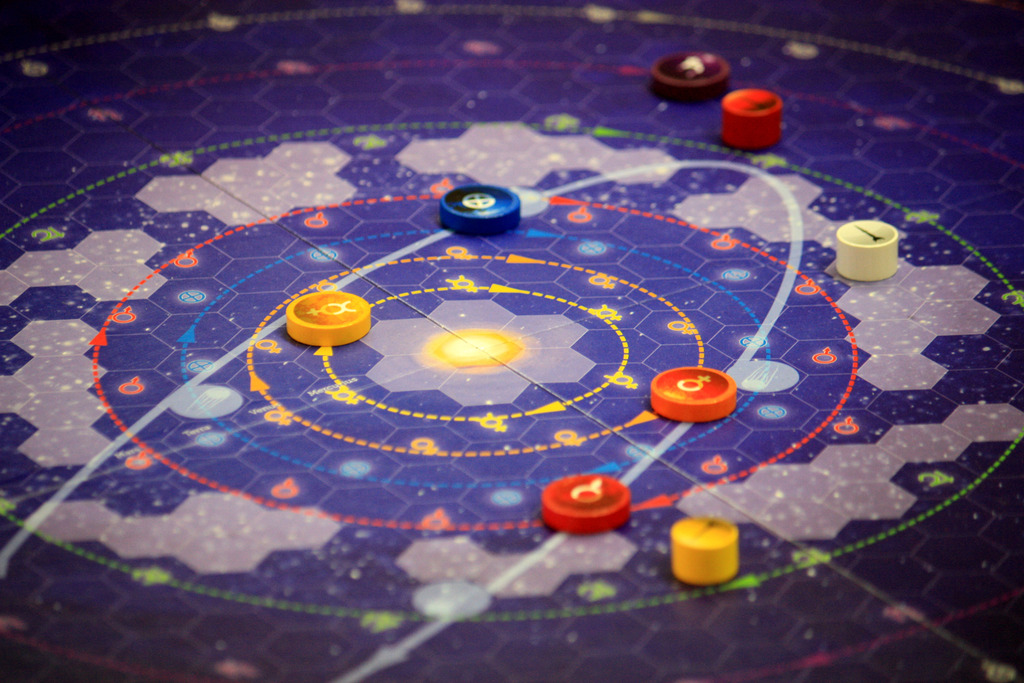 I really like this system. It is clean, elegant, and pleasantly puzzly.

The rest of the game is built around this vector movement system. Your ship carries fuel and has shields. At the start of the game, you load up your ship with fuel and shields and gain your objective cards. Objective cards give you bonuses for visiting those planets.

If only life were that simple. Kosmonauts is played in turns. The first phase is choosing one of a few available event cards. The possible event cards are face up, so players know what could be coming – a good design choice in my book, even if it slows the game down at first. Events range from solar winds that add force to a certain direction, refueling, or asteroids that can be blocked with shields.

After the event, everyone simultaneously programs their ship by adding fuel to the hexagonal compass rose and then they move. Finally, the planets move and the next turn begins. If you are on a planet, you move with it. If you are on a planet, you can give up a turn to refuel. Victory points are earned from objective cards and by landing on planets early in the game, as their point values drop as each one has more visitors. Just to add more fun, there is an asteroid belt an area near the sun which are dangerous to travel through.

I enjoyed Kosmonauts. I liked the design of the system, the diversity of events, and the sense of success when getting where you wanted to go. Think of it as High Frontier super-light – or High Frontier as Kosmonauts super-heavy.

The downside of the game is that some combinations of objective cards are straight up easier than others, depending, literally, on the alignment of the planets. As such, the victor might be determined more by their objectives than their flight skills. If you accept that and enjoy the game/puzzle, Kosmonauts is definitely worthy of your time and fuel.

Note that there is a FAQ and a set of Advanced Game Rules on the MESAboardgames website. For us, the basic rules as written had the game running a bit long while the advanced rules, surprisingly, made the game a bit short. The right length might be 5 planets/comets, excluding Earth, but your mileage might vary. The game rules are very clear, but there are a few detailed questions that are clarified on the site. The art is clear and even if I am sad that there is no Pluto and instead Halley’s Comet, that is certainly something I can live with when I want to be a Kosmonaut.

For Spiel 2013, MESAboardgames has a new title coming, Panamax.

Luke Hedgren: The advanced rules make this game a lot better. Shorter, more variable, and farer. They really should have been the default rules. They aren’t really “advanced” at all, just better. The vector movement is cool, but is not _quite_ utilized to its full potential, as the game does feel a little too….safe. All in all, I enjoy the race around the board. With the new rules, this becomes almost a super-filler length/weight experience, that I enjoy because of the theme.

Nathan Beeler: I liked a great deal of this game, and my overriding feeling is that I would love to see the bulk of the system used on a more interesting map. I know the current board is dictated by the real motion of the planets in the solar system. But I only care about fun, not verisimilitude. Clearly, the most interesting part of the board as it is now is the crazy comet, which scrapes wildly through the rest of the orbits and is much trickier to catch a ride on. I want more of that. I want my brain to burn trying to anticipate how to line up my next slingshot. As the game is now, it’s not only tremendously easy to get from planet to planet, but also to plan ahead quite a few turns. Even a reasonably large miscalculation or a particularly nasty event could usually be corrected on a player’s next turn, so it never felt like good play was rewarded all that much. However, in the system there is much hope. Please contact me if anyone ever does a major tomahawk job on the map, and I’ll be there to help rock it…man.

Love It:
Like It: Jonathan Franklin, Luke Hedgren
Neutral: Nathan Beeler
Not for Me: