Posted on December 4, 2014 by gschloesser 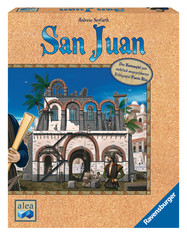 Puerto Rico by award-winning designer Andreas Seyfarth is widely recognized as one of the best boardgames ever designed.  It has won numerous industry and hobby awards, and has sold millions of copies worldwide.  For years it was rated as the top game on the Boardgame Geek,  the hobby’s premier boardgame website.  Mechanisms within the game have been borrowed / copied by numerous other designers, and the game continues to influence game design to this day.

It was no surprise that a card game version of the game was released shortly after the boardgame’s success.  San Juan also proved quite popular, capturing the feel of the boardgame in a card game format.  Sadly, it was out of print for many years, but has recently been republished by Ravensburger under their Alea label.  This new version incorporates the “New Buildings” expansion as well as one brand new building.  Other than these additions, as well as a slightly larger box and new cover artwork, the game remains the same.

In an effort to become San Juan’s most profitable citizen, players will acquire production buildings and use the resources produced to purchase more valuable buildings.  Many buildings supply special powers, enhancing one’s efforts to achieve wealth and prosperity.  The game ends when one player constructs his 12th building, and the player amassing the most valuable buildings emerges as San Juan’s wealthiest citizen and wins the game.

As with Puerto Rico, the central mechanism is choosing roles.  In turn order, each player selects one of the available roles and performs the action and privilege that role conveys.  All opponents also get to perform the action, but not the special privilege, which is reserved solely for the player selecting the role.  Each role may only be selected once per turn.  The roles are:

Builder.  Each player may construct a building, playing a card from their hand and paying the required cost as indicated on the building.  Cards also serve as currency, so the cost is paid by discarding the required number of cards from one’s hand.  The player selecting this role gets a one-card discount when constructing.

Producer.  One production building owned by each player produces a resource.  This is done by drawing a card from the deck and placing it face-down below the building.  The player taking this role is rewarded by having a second production building produce.  Production buildings are the same as in Puerto Rico:  indigo, sugar, tobacco, coffee and silver, with silver being the most valuable.  Each production building can only hold one resource, so it is wise to sell these resources often.

Trader.  Speaking of selling, this is the role that accomplishes that task.  The top trading house tile–which lists the selling prices for each type of good–is revealed. Each player may then sell one good, with the player selecting this role selling two.  Payment is made in the form of cards, which are taken into the players’ hands.

Players do not know the actual selling price–which varies slightly with each tile–until someone selects this role.  This does add a dose of luck / uncertainty to the proceedings, but since the prices don’t vary wildly, it isn’t too much of a concern.  Players who have been mindful of past tiles may want to decline to sell, waiting for a more profitable selling price to arise.

Councilor.  The player who selects this role draws five card from the deck and keeps one.  All other players draw only two cards, keeping one.

Prospector.  This is the only role wherein only the active player derives a benefit, which is the taking of one card from the deck.

Once all players have selected a role, a new round is conducted, with all five roles once again being available to select.  Players must discard down to 7 cards, so card hoarding is not an option. This process continues until one or more players construct their 12th building, at which point victory points are tallied to determine the victor.  With four players, the game usually lasts about 45 minutes or so.

San Juan is significantly less complex and plays quicker than its progenitor Puerto Rico.  This is by design and makes it more accessible to folks new to gaming.  It does take awhile for folks to get accustomed to the fact that cards are used for both building one’s city as well as for currency, a concept that has perplexed several folks to whom I’ve taught the game.  Once that minor hurdle is surpassed, however, the game is easily learned, allowing folks to quickly understand and enjoy it.

There are some interesting decisions to be made.  These primarily center around the choosing of offices and deciding which buildings to construct and which cards to use in their construction.  Buildings that convey the best benefits and most victory points are expensive to construct, so it will usually take numerous turns to accumulate the cards to pay these costs.  Since a player can only hold seven cards at the end of a turn, accumulating enough cards to pay for expensive buildings must be accomplished during the turn, with these cards being expended before players are forced to discard cards.

There is a wide variety of different buildings providing various benefits and rewards.  It is wise to construct buildings whose powers are complementary, as this often enhances a player’s abilities and options.  The new buildings now contained in the base set add even more abilities and options and are a welcome addition.  For those owning the original Alea version of San Juan, these new buildings will be the deciding factor in determining whether to purchase this new edition or simply stick with the original.  If you simply must have the new buildings, purchase the new version.  Otherwise–unless your original edition is getting worn–you probably don’t need to purchase this one.

It is important to note that San Juan is essentially a solitary affair, with little interaction amongst the players.  There is not much a player can do to directly affect his opponents.  Some folks do not enjoy games that have this “solitaire” feel, but I generally don’t mind, particularly if the game isn’t one of great duration.  San Juan’s 45 minute time frame helps overcome any hesitancy due to this solitaire nature.

It seems inevitable that a popular board game is sure to spawn a card and perhaps even a dice version.  Most of these versions don’t measure-up to the original and have a very short shelf life.  While there is no denying that Puerto Rico is a masterpiece that would be virtually impossible to equal in a card game version, San Juan does succeed in capturing much of the flavor, and even uses the central “role” mechanism to great effect.  It is well suited to introduce folks to European-style gaming, and has enough present to keep gamers interested and challenged.  It is one of the better card adaptations of a popular board game.

Jeff Allers: This game has the advantages of an engine-building game with the components–and pacing–of a trick-taking card game. As for interaction, you CAN mess with your opponents with the timing of your role selections, but it’s true that there are no “take that” buildings. One of my favorite fillers, and one I’ve wanted to introduce to many people new to the hobby, but it has sadly been out of print and difficult to find. That’s why this reprint–together with the expansion–is the most exciting “reprint” news I’ve heard since I became involved in the hobby. The extra buildings that were released with the Alea Treasure Chest of expansions is well worth acquiring this new version.

Larry:  Even though San Juan has a few things in common with Puerto Rico, there are so many differences between the two games that I’ve never thought of it as the “Puerto Rico Card Game”.  But it’s an excellent game in its own right.  The innovation of using cards as both buildings and currency guarantees that you will have many tough decisions over the course of a game.  The expansion only adds to the variety.  This was easily the best of the Alea Small Box line and it’s great to see it back in print.

Matt: New gamers seem to be less intimidated by a card game than a board game… plus it’s extremely portable game (I taught the game to friends while we were visiting San Juan…)  I like the role selection and especially enjoy the “engine building” part of the game.  It is hard to find satisfactory engine-building games that are so quick to play.  I find some of the cards more valuable than others (aqueduct, etc..) but that might just be me stuck in a specific style of play.  (Note that it is available as an app for iPad that plays well, for those who are interested in an entirely solo vs AI game.)

Dale Y: After a hiatus of about 8 years, it was time to break out the game again – this time, teaching one of my sons how to play the new version.  He had a pretty good time with it, and managed to figure out the role selection fairly quickly despite never having played Puerto Rico.  I made a point of playing a Hut early in the game to see how it felt, and while it is a new card, it’s certainly not a game-breaker… (i.e. I wouldn’t go out of my way to buy this version if only to get the new card… but – if you needed to replace your old set of cards… this new version is perfect)

Overall, the new version of San Juan is well produced, and while it is not fully complete (missing the event cards expansion) – it’s perfect for me, as I never really played with those Event cards anyways.  The component quality is typical for Ravensburger, and frankly, it’s nice to have a new deck of San Juan cards that aren’t all sticky and hard to shuffle for many many plays in the past.

I do miss the slightly smaller box size as I’m a bit cramped in the gaming basement, but it’s still the fairly compact Alea/Ravensburger mid-size box (10.5″ x 7.5″ x 2″).  If you didn’t already own it, I’d certainly recommend that you pick this up.  Despite the fact that it’s a 10 year old game, it still plays well and has clearly held its own over that time period.

Greg Schloesser is the founder of the Westbank Gamers and co-founder of the East Tennessee Gamers. He is also a prolific reviewer of games and a regular contributor to numerous gaming publications and websites, including Counter, Knucklebones, Boardgame News, Boardgame Geek, Gamers Alliance and many others. Greg has been a gaming enthusiast his entire life, growing up in our hobby mainly on the war game side. His foray onto the internet exposed him to the wonderful world of German and European games and now nearly all of his gaming time is devoted to this area of our hobby. He travels to several gaming conventions each year and is the co-founder of Gulf Games, a regional gaming get-together held in the Southern USA. Greg was born in 1961 and lived his entire life in New Orleans before moving to East Tennessee in 2005. He is married and has one daughter (now married.)
View all posts by gschloesser →
This entry was posted in Reviews and tagged Alea, Andreas Seyfarth, Puerto Rico, Ravensurger, San Juan. Bookmark the permalink.