ModX is a departure from the usual sort of game that I expect from Cryptozoic – it is a strictly abstract game.  The game is an 8×8 grid – set up on a plastic board.  At the start of the game, each player takes all the X-shaped pieces in their color.  Additionally, 5 clear X’s are placed on the board which act as wild markers.

On a turn, a player plays one of their X’s onto any empty space on the board (i.e. a space not occupied by anyone else’s X’s).  The goal here is to create one of the three scoring patterns – the X, the Plus or the cleverly named “Five-in-a-Row”.  Each of the scoring patterns is an arrangement of 5 X’s – and these can be either of the player’s color or the clear wild X’s.  If no pattern is made, the next player gets to take his/her turn. 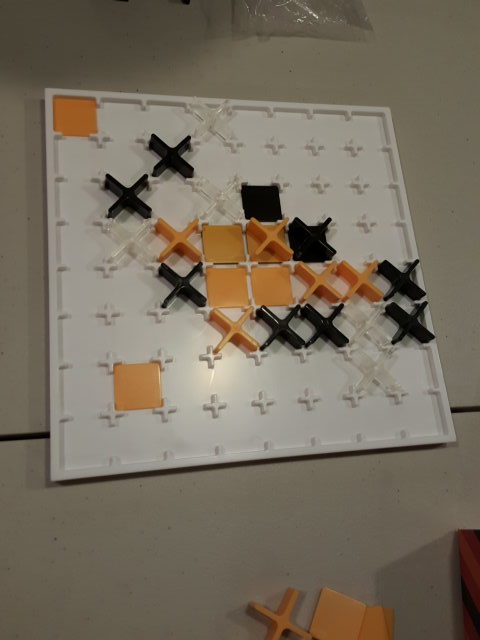 Action shot from a 2p game

After each score, players calculate how many scoring markers they have on the board.  The game is won if a player has

ModX is a nicely designed abstract game.  I have played it three times, once each with 2, 3 and 4 players.  The rules, as you can see, are quite simple.  Play an X, see if you score, repeat.  With the larger size of the board, you’re always on the lookout for places to make an attack and places where you can defend against an opponent making a scoring pattern.

The game feels very different based on the differing number of players in the game – and in my experience, a straight 4p game might not really work (as there are too many opponent Xs on the board to easily score).  With 2 and 3 though, the game has a nice flow to it – players start the game vying for the scoring patterns, seeding the board with a lot of pieces.  Then, once patterns start to be scored, the next level strategy is to strategically move around the Wild X’s that are used in scoring patterns to set up future scores.

What often happens is that the player who is first able to score a pattern with Wild X’s gets into a positive feedback loop where they are then able to move the Wild X’s to score again on their next turn.  However, each time that you score, you have to remove your own colored pieces off the board, and there will come a point where you simply don’t have enough pieces on the board to score again.  At that point, the other players then take advantage of the situation and then go on a run of their own.

Though it seems easy on paper, it’s actually quite hard to keep track of the possible scoring opportunities, and in every game that I’ve played, there has been a few surprise scores that totally changed the game.

In a two-player game, there is a lot of back and forth play, and a lot of direct attacking/defending.  I first played the game in the 2p format, and it was a nice head-to-head battle.  Next up was the 3p game, which makes the strategy a bit more complex as you now have two other people to watch and plan around.  No longer can you only focus on your own moves, but you have to watch two different opponents – and this makes it a bit more interesting in my book.

Sadly, the game did not improve with the move to a 4p cut-throat game.  Now, with 4 players, there are too many different colors on the board, and it’s frankly very difficult to develop a meaningful plan because of the fierce competition for spots.  There is a team variant offered for 4p, and the next time we play this with 4, I think I’ll opt for this rule.